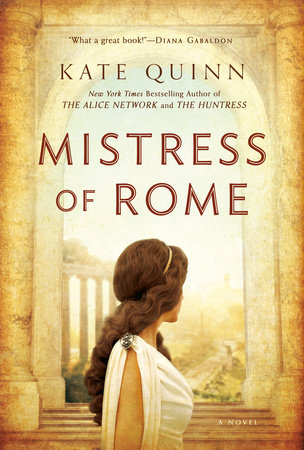 Mistress of Rome is an historical novel brimming with forbidden love and unrelenting revenge. When Thea, a Jewish slave girl, falls in love with Arius, the Colisseum’s rising star, her envious mistress Lepida quickly crushes any hope of their future together. Lepida soon turns her focus to the Imperial court as her appetite for power rages on. Separated from Arius by circumstances beyond her control, Thea reinvents herself as a respected singer for society’s elite, while Arius continues his undefeated reign as the empire’s most famous fighter. Their talents quickly catch the eye of a dangerous spectator, Emperor Domitian, who is determined to destroy Thea’s will and end the gladiator’s glory once and for all. When the fate of love and freedom lie within the hands of a merciless ruler, vows will be broken, alliances will form, and blood will spill.

Kate Quinn is a native of southern California. The daughter of a history major, she grew up with anecdotes about Julius Caesar and Alexander the Great instead of Grimm’s fairy tales. That upbringing turned into Mistress of Rome, written when she was a freshman in college.

Learn More About Mistress of Rome
print
Back to Top