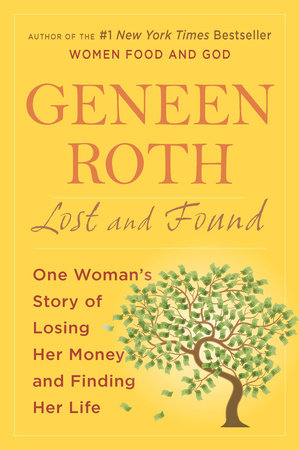 “Our relationship with food is a perfect mirror for every belief we have about being alive. And so, it seems, is the relationship with money,” writes New York Times bestselling author Geneen Roth in Lost and Found: Unexpected Revelations About Food and Money.

When lauded investment guru and former NASDAQ chairman Bernie Madoff was accused and eventually convicted of operating one of the largest Ponzi schemes in history, the news made headlines. For most people, it was simply another story in the media. For those from whom Madoff stole, including Roth, it was a life-shattering occurrence. She and her husband, business speaker Matt Weinstein, lost every penny of their million-dollar savings.

In Lost and Found, Roth candidly reveals how losing nearly everything and being plunged into financial uncertainty finally prompted her to take a hard look at a critical and long-avoided area of her life—her relationship with money. “Until Madoff’s confession, I didn’t realize that I felt exactly the same way about money as I once had about food: I wasn’t allowed to have either,” says Roth, an internationally renowned expert on the issue of emotional eating.

Drawing on her hard-won wisdom, as well as on the experiences of her workshop participants, friends, and other Madoff investors, Roth sheds light on the ways in which women in particular develop patterns and behaviors about money—as with food—that are often financially devastating and emotionally damaging. She identifies her own unconscious choices, such as binge shopping followed by periods of budgetary self-deprivation, and explores how these impulses are deeply rooted in the childhood years and perpetuated by cultural stereotypes.

“Everyone, without exception, has money ‘issues,'” believes Roth. In Lost and Found, she shares how she went from being a “money fluff” to becoming financially aware. Using her own cautionary tale as an example, she underscores why it’s imperative for women to take responsibility for their finances and how this knowledge will dramatically affect all aspects of their lives. Roth compellingly debunks the myths that keep women from embracing financial literacy and offers strategies for breaking free of harmful money habits.

Part memoir and part handbook for understanding the meaning of money in our lives, Lost and Found is an essential road map for building a life centered on principles rather than possessions—told by a woman who lost it all and found that “on the other side of loss, it seems that something priceless still remains.”

Geneen Roth is a noted authority in the field of eating disorders and the founder of the Breaking Free workshops. She is the author of the New York Times bestsellers Women Food and God and When Food Is Love, the memoir The Craggy Hole in My Heart and the Cat Who Fixed It, and numerous other books. Born in New York City, Roth now lives in northern California.

A CONVERSATION WITH GENEEN ROTH
Q. What compelled you to tell your story about being a Madoff investor, first in a Salon.com article and then in Lost and Found? Did you ever consider not revealing that you were involved?

As soon as I realized that there was a way to work through the devastation of the loss and that many people were experiencing the same kinds of losses daily, although not in such extreme ways, I knew I wanted other people to know what I was discovering. And then when I began realizing that there was the same core to the relationships with money as there was to food—and that that information could possibly change the way people eat and spend—the words demanded to be written.

After those first few days of shock and shame (when I wanted to hide and never come out again), I never considered not revealing that I was involved.

Q. You share that prior to the Madoff incident you saw yourself “as an updated version of a 1950s housewife” who took care of the home “so that her important, smart husband could work hard and make the money.” How do you see yourself now, more than two years later, with regard to money?

As I write in the book, I wouldn’t encourage anyone to take investment advice from me (not with my track record!), but I have become so interested in the beliefs and conflicts about money as well as connecting those beliefs with how I actually spend money that it’s not the same life anymore. Once you turn on the light, the darkness really does disappear. Once you become interested in what’s going on, everything changes because the desire to remain unconscious is no longer running the show.

Q. In Lost and Found, you explore the varied ways women and men each deal with money matters. How did your husband’s reaction to losing your savings differ from and also align with yours?

My husband and I, thankfully, followed each other’s lead. He was away when Madoff confessed, so I had two weeks in which to process the shock and grief before he got home. But since he is an optimist (while I seem to always see disaster where it doesn’t exist), he was able to recover quite quickly. Then we both began focusing on what we still had, not what we had lost.

How much impact does a woman’s relationship with money have on her overall quality of life? What is the single most important piece of advice you have for women about money and financial awareness?

Since money is both a tangible means of exchange as well as a way we express our convictions about worth, scarcity, deprivation, and having enough, each of us is deeply affected by what we bring to the relationship with money. It’s not so much the money that determines our quality of life but what we believe about the money we have. When we keep the financial part of our lives hidden, we are hiding from knowing about something we think about and handle every single day, which means we often walk around in low-level anxiety, fear, shame, or panic. This then affects our health, our relationships, our work, our sleep—just about everything.

My single most important advice? Those single most important advice questions are always a bit dicey. Nothing is that simple. But I would say that the willingness to be curious and tell the truth about your relationship with money is crucial. You have to be interested in, and want to know, what you don’t know. Without that willingness to engage and discover what you don’t know or are uncomfortable about, no change happens.

Q. One of the fascinating details you share in the book is that when the Dalai Lama was asked about self-hatred he had no idea what it meant. Why is this predominantly a Western sentiment? How does self-hatred affect women in their relationships with money?

The important thing is not why self-hatred is predominantly Western but what we are going to do about it. How kindly (or harshly) we treat ourselves. When we are operating from a ground of harshness, judgment, or shame, it affects everything because we are either trying to hide the shame and pretend it doesn’t exist or else we are trying to compensate for it by looking, eating, or spending in particular ways that don’t actually match our situations.

Q. More than sixty years ago, Simone de Beauvoir wrote in The Second Sex about the need for women to achieve financial independence. How far do you think women have come over the last five decades regarding fiscal awareness and responsibility?

I am not an expert in gender division and the glass ceiling, but I do know that most women I talk to, even those who are quite successful, would rather not think or talk about money. Not because it’s taboo, but because there is a sense that it’s too complicated and they’d rather spend their time on something they like or are good at. They say what I used to say: I hire people who know what they are doing so that I don’t have to do my job and theirs. And while it’s important to know who to talk to and to respect the values of the people you choose to help you make financial decisions, there is a basic disconnect here. Most of us don’t make the connection between the time and energy—the hours of our lives—we spend earning money and what we do with the money we earn. We allow other people to make huge decisions for us and, in so doing, abdicate responsibility for the impact we could have by making conscious decisions about what, where, and with whom we spend and direct our money.

Q. Some people might have remained bitter or resentful about losing their life savings, and yet it seems as if you were able to overcome those negative feelings. Although you tell us in the book that making lemonade from lemons isn’t your style, do you think you have done just that? Do you see your story as both cautionary and inspirational?

I also write that my brother chided me by saying that some people suffer, but I make a career out of my suffering. I’m fascinated with and passionate about diving below the surfaces of situations, feelings, actions. So when we lost our money, I couldn’t help but want to know everything I could find about my own beliefs and the world of finances. In that process, lemonade got made because what I found was so much more interesting than what I’d lost.

Q. You say at the end of Lost and Found that you opened a bank account especially for money that will be given away. Have you found this to be an effective strategy in reducing the anxieties associated with having money? What are some of the things you have done with these funds?

For me, opening that account really was a way to deal with the ancient survival-based beliefs that I didn’t have—and will never have—enough. I want to be more generous than I am, and so I acted on what I want to be rather than taking my cues from the fear. And yes, it’s been effective. Sometimes it’s important to tell the mind “Yes, I hear how anxious you are” and then act anyway because the mind is very good at creating suffering where it doesn’t exist.

The money is now in an irreversible philanthropy fund, which means that if I change my mind and suddenly decide that I need it because I’m three minutes away from being homeless, I can’t take it back. The donations go to my favorite animal-saving, ocean-saving, forest-saving organizations.

Q. The scene you describe about surprising your students with a money exercise during a food retreat is fascinating. Are you continuing to incorporate money discussions into your retreats about food? If so, how are students reacting to this?

Most people would rather talk about anything but money—and because of that don’t even realize we have big issues with money or that we are living in a low-level state of anxiety and fear about it. Given that, my students are incredibly willing to look into the cobwebbed places in their minds, hearts, lives. Most of them, like me, had never even thought about money and food in the same breath. It’s an ongoing revelation for us all.

Q. For readers familiar with your food-related books, as well as those who are new to your work, what would you like to tell them about Lost and Found?


Learn More About Lost and Found
print
Back to Top