How to Get Filthy Rich in Rising Asia Reader’s Guide 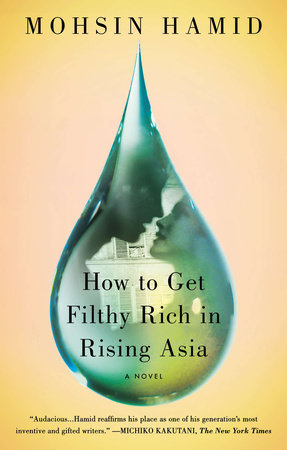 How to Get Filthy Rich in Rising Asia Reader’s Guide

How to Get Filthy Rich in Rising Asia tells the story of an anonymous man’s journey from impoverished rural boy to tycoon in an unnamed contemporary city in “rising Asia,” and of his pursuit of the nameless “pretty girl” whose path continually crosses but never quite converges with his. Stealing its shape from the self-help books devoured by ambitious youths all over “rising Asia,” the novel is genre-bending and playful but also reflective and profound in its portrayal of the thirst for ambition and love in a time of shattering economic and social upheaval. How to Get Filthy Rich in Rising Asia, Mohsin Hamid’s third novel, confirms that this radically inventive storyteller is among the most important of today’s international writers.

Mohsin Hamid grew up in Lahore, Pakistan, and attended Princeton University and Harvard Law School. In addition to How to Get Filthy Rich in Rising Asia, he is the author of the international bestseller and Man Booker Prize finalist The Reluctant Fundamentalist and the PEN/Hemingway Award finalist Moth Smoke,which was also a New York Times Notable Book and was awarded the Betty Trask Award. Hamid contributes to Time, The New Yorker, The New York Times, The Washington Post, The International Herald Tribune, Granta, and other publications. He lives in Lahore with his wife and children.

A CONVERSATION WITH MOHSIN HAMID

This week’s story, “The Third-Born,” opens with a sick young boy curled up on a packed-earth floor under his mother’s cot, whimpering in pain. When did this image first come to you?

The week of my multi-day marriage in Pakistan, my wife wasn’t herself. She was tired, drained, out of sorts. She loves dancing but could barely get to her feet. A doctor said she was fine. My aunts said, “It happens. Just nerves.” Eventually, though, my wife started crying, and I told her to pull herself together, no one was forcing her to get married, and this was starting to get ridiculous.

The day after our wedding, we found out she had hepatitis E, probably from eating contaminated food. It took her a month to recover. We cancelled our honeymoon. Even now, when I think about the look she gave me as we heard her diagnosis, I’m sheepish-and if looks were uppercuts, well, I’d be curled up on the floor, whimpering in pain.

So I’d say, to the extent I can, that the image came in parts, and congealed when I started writing. For me, creating a character is like acting. I have to imagine being them. Empathy is about finding echoes of another person in yourself. And when I imagined being the boy in this story, these were some of the echoes I found.

The story is taken from the opening chapters of a novel you’re working on, How To Get Filthy Rich in Rising Asia, which follows this boy from childhood into adulthood. Your first two novels were set in Pakistan, yet you never specify your protagonist’s homeland in this case. Was that a deliberate choice? How specific and how universal have you been in your account of the boy’s surroundings and situation?

My first novel does have a few pages set in New York, and my second is largely about events in New York, even though it takes the form of a one-sided conversation in a Pakistani café. So this is the first time I’ve set a novel entirely in one country. I wanted to use Pakistan as a template, but not be bound by it. Not having any names in the novel, except for continent names, was a way for me to de-exoticize the context, to see it fresh. You have to think differently when there’s religion but no words “Islam” or “Christianity,” food but no Afghani tikka or Wiener schnitzel, beloveds but no Laila or Juliet. I wanted to find my way to something universal, and since I work with words, I tried to teach myself through selective abstinence.

The story, like the novel, is told in the second person. As a result, the reader is both privy to the protagonist’s innermost thoughts and yet often allowed to understand the implications of events that the boy (and later man) is not yet aware of himself. Did you always know you were going to tell his story in the second person? Did it present any particular challenges?

I’ve tried to avoid the second person in all three of my novels, and versions of it have found their way in every time-increasingly so, in fact. I suppose it’s because I can’t shake the idea that a novel is like a dance, with two people dancing, writer and reader, and it’s a bit strange to pretend I’m doing it by myself. This time around, after a couple of failed drafts, I gave in to the second person completely, and I found it pretty liberating as a form: you can move from a hyper-intimate first-person-like perspective to a cosmically removed third-person-like one very easily. It seems to invite that kind of riffing.

The boy lives with his mother, his two older siblings, and his father’s extended family in a small village, while his father works in the city as a cook. The boy’s mother persuades his father to take her and the three children back to the city with him. “You embody one of the great changes of your time,” you write. “Where once your clan was innumerable, not infinite, but of a large number not readily known, now there are five of you. In the history of the evolution of the family, you and the millions of other migrants like you represent an ongoing proliferation of the nuclear. It is an explosive transformation-the supportive, stabilizing bonds of extended relationships weakening and giving way, leaving in their wake insecurity, anxiety, productivity, and potential.” Do you think the nuclear family, rather than the clan, offers more potential for the fiction writer?

Nuclear families are easier to write, at least for me. They have fewer moving parts. But the clan is important. It’s vital to understanding the world. The problem is that I gravitate toward compression. Slender books. So a writer like me doesn’t have natural recourse to one of the usual clan-writing options, which is to approach it through a big, sprawling, multitudinous novel. Without open spaces for narrative and characterization, clan-writing can become essayistic. But I think there are ways to re-appropriate essayistic writing in fiction. Certainly I’m trying to figure out ways to do so. Tell, don’t show. Sometimes. Then again, there are writers who make clan-writing on a compressed canvas look effortless: Lampedusa, Achebe. Wow.

You grew up in Pakistan, but spent part of your childhood in the United States, and as an adult, have divided your time between Pakistan, the States, and Britain. Your first novel, Moth Smoke, was about a young banker in Lahore, your second novel, The Reluctant Fundamentalist, concerned an American-educated banker who has returned home to Pakistan. The boy at the center of “The Third-Born” has little chance of leaving his homeland to study abroad, or of becoming a banker in his twenties. What was it like to examine the way society functions from another part of the spectrum? Does chance play as powerful a role in those lives as it does in this one?

Chance plays a powerful role in every life-our brains and personalities are just chemical soup, after all; a few drops here or there matter enormously-but consequences often become more serious as income levels go down. The new novel is about seventy years in a man’s life, but because it’s all set in the historical present, it could also be the stories of a dozen different people at a dozen different levels of society, all occurring right now. I wanted to see what happens when you fuse a lifelong saga with a society-wide one. Two segmentations: one along time, the other along class, operating simultaneously. Like slicing an apple on two axes, the vertical of an individual and the horizontal of a community, to see what kind of fruit it really is on the inside. What kind of fruit I really am. A nutty one, clearly.

The Sound of Things Falling

The Room
Back to Top