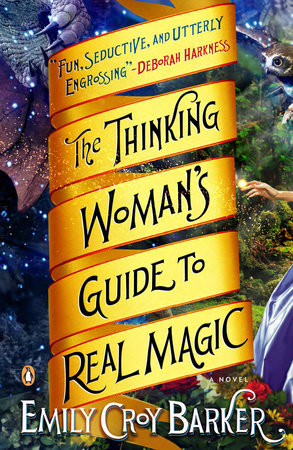 With her dissertation stalled and her ex-boyfriend engaged to another woman, Nora Fischer finds herself flailing. While suffering through a friend’s wedding weekend, Nora wanders into the woods to clear her head and somehow discovers a portal that transports her away from her current misery into a world unlike anything she’s known before.

There, Nora meets a mysterious and powerful woman named Ilissa and her suave son, Raclin. Nora is seduced by the excitement of this new realm, and she tumbles headlong into a passionate romance with Raclin. The wondrous veneer soon fades though, and Nora realizes she’s not only caught in a strange, foreign land but she has been thrust into an age-old power struggle between Ilissa, Raclin and their nemesis, the magician Aruendiel.

When Nora finds her life in danger, it is Aruendiel who comes to her rescue and who reluctantly agrees to mentor her in the spells and magic that she’ll need to survive in this new and perilous world. Despite Aruendiel’s reclusive, acerbic nature, Nora begins growing closer to him. As her spell-casting skills grow, Nora encounters plenty of magical characters including a former witch-priestess-turned magician and her dangerous pet, a wizard with literary ambitions, and an ice demon whose deadly hunger is tamed only by poetry. As the land readies for war, Nora is alone at a crossroads with a decision to make: stay in this realm of magic or return to her own world?

Emily Croy Barker has written a richly imagined debut that is steeped in the literature of fantasy, fairy tale, and classic fiction. Readers will find all sorts of homages in The Thinking Woman’s Guide to Real Magic-from Beauty and the Beast, to Alice in Wonderland, to classic journeys to the underworld. And they will fall for Nora, who is indeed a thinking woman’s heroine: smart, quirky, witty, and best of all, very real.

A graduate of Harvard University, Emily Croy Barker has been a magazine journalist for more than twenty years. She is currently executive editor at The American Lawyer. This is her first novel. She lives in New Jersey.

Which of the characters in The Thinking Woman’s Guide To Real Magic did you most enjoy writing?

Aruendiel, no question. He says exactly what he thinks, and he doesn’t mind giving offense to anyone. Not something that most of us can get away with in our daily lives. Of course, Ilissa was also a lot of fun, too. Because she’s also honest-Faitoren can’t tell lies-but at the same time, she’s thoroughly deceitful.

Are any parts of this novel autobiographical?

You mean, is it about the time I stumbled into an alternate world and started studying magic? Sadly, no.

There were things in my life that I deliberately borrowed for the novel. The way Aruendiel talks about other magicians-I was thinking of how my father, who was a painter, used to talk with his artist friends about other artists, about who was doing good work and who wasn’t. My dad was the kindest and most gentle person ever, but he was ruthless when it came to criticizing bad art. It’s the idea that you have a calling that you have to follow and you don’t sell out.

I gave Nora some of my interests-a penchant for memorizing bits of poetry, a love of cooking-although she’s much better at both things than I am. She’s also braver than me. You could never get me to go up a cliff like the one at Maarikok, even with a levitation spell! And I let her take a path that I considered but never took-going to grad school in English.

How did you invent the world in The Thinking Woman’s Guide to Real Magic? Did you make a map at any point?

To be honest, I didn’t spend too much time trying to chart the world of the novel, at least not initially. I sketched some very rough maps of Aruendiel’s castle and the land immediately surrounding it-the orchard, the river, the village, the forest-so that my characters wouldn’t get lost as they went about their daily business. And I had a very general map in my head of the kingdom of Semr and the surrounding lands, but I didn’t put it down on paper because I didn’t want to be distracted from the real job at hand, trying to make this imaginary world come alive with words.

I spent more time thinking about the details of the world. What the landscape looks like, the trees, the hills, the geology. What sort of food people grow and eat. The weather. How society is organized politically. The technology-it seemed to me that if you have wizards and magicians to take care of various complicated or annoying tasks, and they’re all doing the bidding of various kings or warlords, then you’re probably not going to have much in the way of scientific or engineering advancement, certainly nothing that benefits the mass of people. So, horses for transportation; fire for warmth and light; goods made by hand by artisans, etc. Although I wasn’t trying to write a medieval fantasy, I ended up with a world that I admit does have a medieval flavor.

Nora is swept away into a kind of too-good-to-be true existence, and even though a part of her knows it isn’t right, she stays with Ilissa and Raclin until it’s almost too late. Have you ever been in a similar situation (sans magic)?

Nothing as bad as what Nora goes through! Of course, we all have the capacity for self-delusion-in love, in work, in all kinds of things. Nora, though, gets in pretty deep. She’s immersed in this wonderful dream, and then she doesn’t want to give it up, even when Aruendiel tells her it’s an illusion. What Nora experiences here is the dark side of imagination and fantasy-total separation from the real world, leading to a loss of self.

One of my friends who read the book saw the Faitoren enchantment as a metaphor for addiction. I didn’t intend that consciously, but I thought that was a very interesting interpretation.

If you could have the ability to use magic in our world, would you want it?

Absolutely. Not necessarily for the sake of having magical powers-although I suppose you could get used to that-but for being able to relate to the world the way magicians do. It would be really cool to be able to walk in the woods the way Aruendiel does and have the trees recognize and greet you and perhaps even converse with you in a kind of silent, secret language.

How did you develop Ors, the language Nora must learn in order to communicate?

I didn’t work out any kind of comprehensive grammar or vocabulary for Ors, but I did think a lot about what kind of language it was and how it might be different from or similar to the languages of our world. For instance, we have lots of informal rules in English that tell you something about a speaker’s social status or age or background. I’m thinking of things like the way teenagers will often use a rising inflection at the end of their sentences-so that everything sounds like a question? So in a society where women have a subordinate role, it seemed likely that the language that women speak might be slightly different grammatically from the language that men speak. Nora doesn’t realize this until Aruentiel explains it to her, though. Then she’s furious.

There are a number of literary references in the novel-Jane Austen, Oscar Wilde, William Carlos Williams, among others. Do you share some of Nora’s favorite authors? What made you choose the authors you did?

Oh, yes, these are all favorites of mine, and in fact a few of them I like much more than Nora does. She’s a little snobbish about Tolkien, for example, which I think reflects her grad school orientation.

Mostly I chose to quote lines of poetry that reflected Nora’s thoughts and feelings; they were all from canonical English and American poems that she would have come across in her studies. She seems to be especially fond of Elizabethan and metaphysical poets-which makes sense, given that her thesis is on John Donne-but she also likes the early moderns: Dickinson, Williams, Stevens. Some of these quotations were scraps of poetry that I remembered myself, with varying degrees of clarity; others I came across as I was writing the novel and realized, aha, I can use this.

As I was trying to figure out which book Nora would translate for Aruendiel, I decided that Pride and Prejudice would be a good reference point for many readers. It also echoes some of the elements of Nora’s relationship to Aruendiel without recapitulating it too closely.

Did any other book help to shape your novel?

Many books! Most of them were not models that I chose deliberately, but as I look back, I can see their influence in what I wrote. To single out a few: I believe it was Susanna Clarke’s Jonathan Strange & Mr. Norrell that made me consider writing about magicians in the first place. J. K. Rowling showed me how to write fantasy with a little bit of irony and understated humor. And then I found myself thinking of Jane Eyre-which I must have read at least once a year when I was between the ages of twelve and twenty-as I wrote about Nora coming to live with Aruendiel, becoming his pupil, and finding herself more and more intrigued with this strange, complicated man.

You make an interesting distinction between wizards and magicians in this book. Which would you rather be?

A magician, definitely. I’m with Aruendiel-I wouldn’t want to be dependent upon ghosts and demons for my magic.

The novel ends with a strong hint that Nora and Aruendiel’s story will continue. Are you working on a sequel?

Yes, I’m about halfway through a first draft. We haven’t heard the last of Nora and Aruendiel yet.

You’ve been a journalist for more than twenty years. How was the experience of writing a novel different from that of journalistic writing?

In some ways, writing a novel is very much the same as writing a magazine feature. The prose has to be taut and the story has to move at a good pace. It’s helpful to have a definite point of view, intriguing characters, and of course a compelling narrative. What’s different is that you have so much more freedom to invent, to go inside the heads of your characters, to be creative in how you use language. Also, it’s really intoxicating to be able to write page after page of dialogue after having been restricted to quoting only what you can verify people said on a given occasion. These are all really powerful tools, and I had to spend a fair amount of time learning to use them correctly.

The Sleeping Beauty Trilogy
A. N. Roquelaure and Anne Rice

The Memory of Fire
Callie Bates

The Pillars of the World
Anne Bishop

Finding the Way and Other Tales of Valdemar
Mercedes Lackey

Crossroads and Other Tales of Valdemar
Mercedes Lackey

The Book of Jhereg
Steven Brust

The Silver Wolf
Alice Borchardt
Back to Top