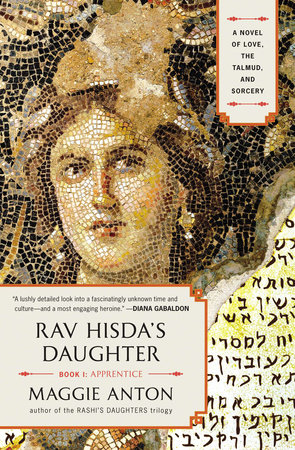 Hisdadukh, blessed to be beautiful and learned, is the youngest child of Talmudic sage Rav Hisda. The world around her is full of conflict. Rome, fast becoming Christian, battles Zoroastrian Persia for dominance while Rav Hisda and his colleagues struggle to establish new Jewish traditions after the destruction of Jerusalem’s Holy Temple. Against this backdrop Hisdadukh embarks on the tortuous path to become an enchantress in the very land where the word ’magic’ originated.

But the conflict affecting Hisdadukh most intimately arises when her father brings his two best students before her, a mere child, and asks her which one she will marry. Astonishingly, the girl replies, “Both of them.“ Soon she marries the older student, although it becomes clear that the younger one has not lost interest in her. When her new–found happiness is derailed by a series of tragedies, a grieving Hisdadukh must decide if she does, indeed, wish to become a sorceress. Based on actual Talmud texts and populated with its rabbis and their families, Rav Hisda’s Daughter: Book I – Apprentice brings the world of the Talmud to life – from a woman’s perspective.

Praise for the Rashi’s Daughters trilogy:

“A compelling combination of drama, suspense, and romance.“ —Lilith magazine

Q. Parts of the novel are based in historical fact. Why did you decide to write a work of historical fiction? What drew you to this time period in particular?

A. I have always preferred novels to nonfiction, so I decided to write the book I wanted to read. When my Talmud studies brought me to the passage where Rav Hisda’s daughter, sitting on her father’s lap, says she wants to marry both suitors, I knew I wanted to write her story – which would take place in the Third–Fourth Century. This time period is crucial in Jewish history, yet very few people are familiar with it. Thus it was ripe for discovery.

Q. How is writing this series different from writing Rashi’s Daughters? What new challenges did Rav Hisda’s Daughterpresent for you?

A. One big difference is that this series is written in first person, using only my heroine’s point of view, while the Rashi’s Daughters trilogy is written in third person, from many different characters’ POV. That presented a new challenge for me, because I could only provide information that Hisdadukh saw or heard herself. Anything she didn’t know, my readers wouldn’t know either. Another is that there are so many more facts available about Rashi’s life and times [11th–century France] than about the Talmudic sages in Babylonia. A huge challenge was that nearly we know about this world comes from the Talmud itself, which is not a historical document, and there is no simple way to mine its vast trove of information.

Q. You state in the afterword that all of the magical scenes in the novel are also noted in the Talmud. Was there a reason why you chose not to include other magical scenes? What compelled you to write about magic in the ancient Jewish world?

A. All the magical scenes are either from the Talmud or from historical artifacts such as amulets or incantation bowls. I wanted to write about “real“ magic; that is magic that Jews in Babylonia actually practiced. I wanted Rav Hisda’s Daughter to stand out as different from all the novels today that involve magic the author made up. At first I hadn’t expected magic to play such a significant role in this story, but the more I researched Jewish life back then, the more I realized that the literate women who created these amulets and incantation bowls were likely from rabbinic families. And when I read that her father knew spells, it gave me the idea to make Hisdadukh an enchantress herself – which meant I’d be writing about her training and the magic others were using.

Q. Hisdadukh is such a strong female character, despite living in a time where women weren’t given the same opportunities that men were. How were you able to work within her circumstances to create such a strong–willed and independent character?

A. Rav Hisda’s daughter is the woman mentioned more often in the Talmud than any other, one endowed with wealth, wisdom, and power. Thus she has opportunities not available to the average Jewish woman of her time. Still she is constrained by her gender in that, despite all her learning and intelligence, she can never be a rabbi. By having her learn to be an enchantress, it gives her a profession where being independent and strong–willed is an asset.

Q. What are you working on now? What can we expect from Hisdadukh in the next book?

A. I’m working on the series’ second volume, Book Two – Enchantress, where she finally marries Rava and starts a new family with him. The two of them will find themselves embroiled in court intrigue as Rava becomes the preeminent rabbi in Babylonia, as well as King Shapur’s confidant. Hisdadukh will face many challenges as she continues her enchantress training and comes into conflict with other magic users who resent and fear her.