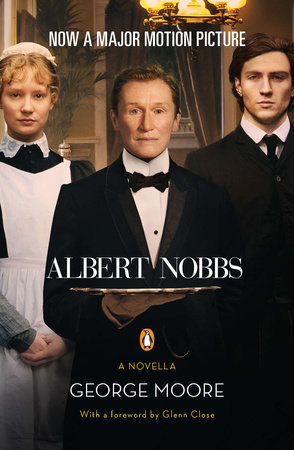 Long out of print, George Moore’s classic novella returns just in time for the major motion picture starring Glenn Close as a woman disguised as a man in nineteenth-century Ireland.

This enhanced eBook includes video and stills from the movie, and features a foreword by Glenn Close.Set in a posh hotel in nineteenth-century Dublin, Albert Nobbs is the story of an unassuming waiter hiding a shocking secret. Forced one night to share his bed with an out-of-town laborer, Albert Nobbs’ carefully constructed facade nearly implodes when the stranger discovers his true identity—that he’s actually a woman. Forced by this revelation to look himself in the mirror, Albert sets off in a desperate pursuit of companionship and love, a search he’s unwilling to abandon so long as he’s able to preserve his fragile persona at the same time. A tale of longing and romance, Albert Nobbs is a moving and startlingly frank gender-bending tale about the risks of being true to oneself.

George Moore was born in Ireland in 1852. At the age of eighteen, following the death of his father, he ran off to Paris to study painting. Immersed in Parisian café society, he mingled with many great artists of the… More about George Moore