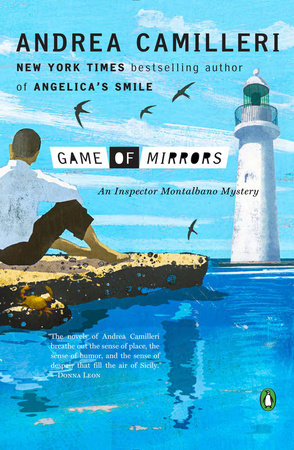 Inspector Salvo Montalbano’s attractive new neighbors, Adriano and Liliana Lombardo, keep largely to themselves. That is, until car trouble forces Liliana to appeal to the Inspector for help. Around the same time, a bomb explodes outside of an empty warehouse. Deputy Inspector Domenico “Mimi” Augello believes it’s “a case of nonpayment of protection money” (p. 11), but Montalbano suspects a more complex reason for the attack. Unfortunately, the Inspector is having a difficult time focusing on anything besides the bodacious Liliana, who is suddenly sticking to him like glue.

When he’s first questioned, Angelino Arnone, the owner of the warehouse, insists, “he’s never paid the racket because he’s never been asked to pay, that he has no enemies and is loved by all” (p. 11). A few days later, a nervous and sweaty Arnone turns up at the station to refute his earlier statement. Montalbano remains unconvinced.

Although the bomb exploded in front of Arnone’s warehouse, its placement suggests that it could have been meant for the apartment building next door—especially since it’s the residence of Carlos Nicotra, head of the Sinagra family’s drug cartel. The case reminds Montalbano of an Orson Welles film “in which there’s a scene that takes place in a room entirely made up of mirrors, where the person can no longer tell where he is and becomes completely disoriented” (p. 61).

Meanwhile, Montalbano puzzles over a very different mystery. After referring Liliana to his mechanic, Montalbano learns that someone deliberately destroyed her engine. To his surprise, Liliana stubbornly insists that the damage was caused by her poor driving skills, pouting, “it’s not going to be easy for me to go back and forth to Montelusa” (p. 19). Before he knows it, the Inspector has agreed to give her a lift to work every morning until her car is fixed.

More perplexing than Liliana’s car, however, is her hot-and-cold behavior. Drinking heavily, wearing the scantiest of dresses, and laughing “like a dove in love” (p. 19), Liliana seems intent on seducing the Inspector. Her husband, Adriano, a traveling salesman for a computer company, hasn’t been home in days, so she has the place to herself. Yet—when Montalbano investigates a late-night visitor in a green Volvo—he “heard Liliana moaning. Certainly not in pain” (p. 23).

Soon after, Montalbano’s lunchtime peace is shattered when he arrives at Enzo’s Trattoria and finds the proprietor watching TeleVigàta. “Talking on-screen was the station’s top newsman, Pippo Ragonese, who didn’t like the inspector, and whose feelings were amply returned in kind” (p. 64). On the air, Ragonese openly mocks Montalbano for his inability to protect the public from another bomb.

Teased by Liliana, stalked by the press, and flummoxed by a case that grows murkier by the minute, Montalbano is fed up with chasing lies. But when a man is found savagely murdered, the Inspector must find the real culprit—or find himself framed for a crime he didn’t commit.

1. How do you interpret Inspector Montalbano’s dream at the beginning of the novel?

2. What does Montalbano’s theory about the proliferation of paperwork on his desk say about him?

3. Is there any significance to the fact that the Lombardo’s house is “almost identical” (p. 6) to Montalbano’s own?

4. When Montalbano’s housekeeper, Adelina, invites him over to celebrate her son’s birthday, the Inspector is torn between Adelina’s arancini and the dinner date he made with his neighbor, Liliana Lombardo. If Liliana hadn’t agreed to join him at Adelina’s, what choice do you think he would have made? Which would you choose if you had pick between a delicious meal and a sexy—but illicit—date?

5. Are you familiar with The Lady from Shanghai, the Orson Welles’ movie that includes the famous scene in a house of mirrors? If so, why might Camilleri connect this particular movie to his novel? If not, have you ever read about something in a novel and sought it out to read/watch/experience for yourself?

6. In Vigàta, which seems more corrupt: the press or the government? Do you think that Sicily is more corrupt than America, or is it simply better hidden here?

7. While lunching at Enzo’s, Montalbano observes cavaliere Ernesto Jocolano make a fuss about the cleanliness of a plate. Jocolano’s observations spur Montalbano to make a connection he had previously overlooked. Did you understand what Montalbano was thinking before he explained it to Fazio?

8. Were you misled by any of Camilleri’s red herrings? If so, which one?

9. (Spoiler Warning: Don’t read on if you don’t what to know whodunit!)

Montalbano suspects that Liliana has ulterior motives for trying to seduce him, but he still has a difficult time resisting her. How do you think the average man would behave in the same situation?

10. Was there anything Montalbano could have done to save Liliana and Arturo? Did your opinion of Liliana change once you knew she was trying to protect Arturo?

12. What do you think about the way Montalbano sets Nicotra up? In Sicily—where justice is notoriously crooked—did the mafia kingpin deserve to die the way he did?

Andrea Camilleri is the bestselling author of the popular Inspector Montalbano mystery series, as well as historical novels that take place in nineteenth-century Sicily. His books have been adapted for Italian television and translated into thirty-two languages. His thirteenth Montalbano novel, The Potter’s Field, won the Crime Writers’ Association International Dagger Award and was longlisted for the IMPAC Dublin Literary Award.

Stephen Sartarelli is an award-winning translator and the author of several volumes of poetry.
Learn More About Game of Mirrors
print

A Beam of Light

The Pyramid of Mud

A Nest of Vipers

The Other End of the Line

The Cook of the Halcyon

A Voice in the Night

The Crowded Grave
Back to Top