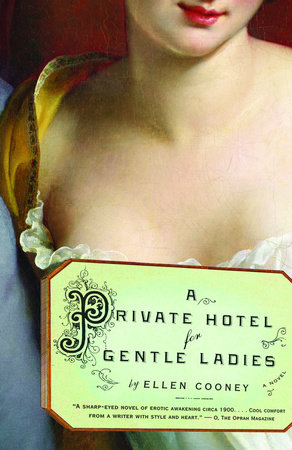 The introduction, discussion questions, suggestions for further reading, and author biography that follow are designed to enhance your group’s discussion of A Private Hotel for Gentle Ladies by Ellen Cooney—a sexy novel of self-discovery set at the turn of the last century about a married woman who impulsively embarks on a journey of escape and finds adventure, sexual satisfaction, and independence.

Charlotte Heath has finally recovered from the mysterious illness that kept her bedridden for nearly a year. She sets out on a horse-drawn sleigh to surprise her husband Hays by joining him at a family wake. But Charlotte is the one who gets a surprise: she catches Hays just as he is about to kiss another woman. Quickly fleeing, she makes her way to Boston and to the Beechmont, a private hotel for gentle ladies where the Heaths’ recently fired housekeeper works as a cook. The Beechmont, Charlotte soon discovers, offers a most unusual service. At night, the handsome young men on the hotel’s staff appear in the guests’ bedrooms ready, willing, and exceptionably able to satisfy a gentle lady’s sexual and emotional needs.

A richly detailed portrait of early-twentieth-century manners and mores, A Private Hotel for Gentle Ladies explores the forces—personal, familial, and societal—that spell disaster for Charlotte and Hays’s marriage, and reveals the hidden qualities that guide the couple to a new understanding of themselves and each other. Adding a wonderful new twist to the classic themes of sexual awakening and the journey toward self-knowledge and independence, the novel combines the engrossing pull of historical fiction and the pleasurable escape of a favorite fairy tale.

1. What does the first scene convey about Charlotte’s personality? How does her reaction to seeing Hays with another woman capture both her spirit and her insecurities? What does it reveal about Hays and his attitude toward Charlotte?

2. Even before her illness Charlotte is isolated from the Heath family. What factors play a role in their general disapproval of her? In what ways does Charlotte confirm their assumptions about her? Is her unacceptable behavior inadvertent, the result of naiveté and a lack of proper training, or does she intentionally provoke the family’s disapproval?

3. Would their marriage have taken a different course had Charlotte and Hays established a home of their own? Do the politics and social standards of the time, as well as Hays’s regard for his family’s wealth and position, make it impossible for him to conceive of a different, more egalitarian relationship? What part does Charlotte’s inability to have children play in the unraveling of their marriage?

4. Discuss Charlotte’s relationships with the other people in the Heath household. With whom does she feel most comfortable and why? How do her interactions with the men and the women in the family differ? What does this reflect not only about the dynamics of the well-to-do Heaths, but also about family life and the roles assumed by—or assigned to—men and women, masters and servants, during the period?

5. Is Charlotte’s flight an impulsive, irrational act? What light do her recollections of her life with Hays and her response to his admonitions shed on her mood and state of mind?

6. Charlotte says she married Hays “because saying no to him would have been like saying no to your own heart” [p. 41]. What qualities make him appealing not only to Charlotte but to the reader as well? What do the secrets he hides from the family (for example, his interest in poetry, p. 77) show about his character and beliefs? What originally attracted Hays to Charlotte?

7. On one level, the Beechmont is a refuge for Charlotte and the other guests. What else does it symbolize? How do the descriptions of Charlotte’s arrival [p. 46] and her reactions to Harry Alcorn, Lily Heath, and the handsome young man in her room [pp. 50–52] signal a change in Charlotte’s reality? Discuss the relationship between Charlotte’s sojourn at the hotel—including the people she meets—and the novel’s earlier references to Alice’s Adventures in Wonderland [pp. 17–18]. What other fantasies, fairy tales, and literary works does the novel evoke, either implicitly or explicitly? How do these references deepen the meaning and impact of the story?

8. How would you characterize the tone and intention of Hays’s letter to Charlotte [pp. 92–93]? Why does Charlotte destroy it without a moment’s hesitation?

9. What does the hotel offer Aunt Lily and Berenice Singleton? What particular needs does it satisfy for each of them? Why, despite Lily’s good marriage and professional achievements and Berenice’s artistic talent, have they found it necessary to establish lives hidden from the everyday world of Boston? What does the portrait of Mrs. Alcorn
[pp. 171–173] contribute to the themes Cooney explores?

10. What effect does social status and family background have on the options available to the various women in the novel? Which female characters are most successful at overcoming the obstacles society has placed in their way?

11. What does Charlotte learn about herself at the hotel? How do Arthur, Mr. Alcorn, and Dickie, each in his own way, open her eyes to aspects of her personality she had previously suppressed or dismissed? What role do her sexual encounters with Arthur play in Charlotte’s metamorphosis?

12. “Why should someone’s life seem obvious and plain, and fully surfaced, like an enormous boulder in the middle of a flat, empty field, visible for miles, when it was so much closer to the truth that—if one’s life were like a giant rock—three-fourths of the rock, maybe more, would have to be underneath, invisibly connected to cores of things, for good reason?” [p. 198]. What does this quotation convey about Charlotte’s understanding of society and the demands it makes on individuals? In what ways does it illuminate how Charlotte has changed or matured during her stay at the hotel?

13. Why does Charlotte decide to search for her parents? Why does she decide not to see them when she learns where they are? How does Hays affect her decision?

14. Does the novel end happily? What do you think will happen to Charlotte and Hays in the future?

15. A Private Hotel for Gentle Ladies is set against the background of a cold, snowy New England winter. How is the weather a metaphor for the events the novel depicts? How does it reinforce the emotional world of the characters?

16. A Private Hotel for Gentle Ladies is reminiscent of many nineteenth- and early-twentieth-century novels of manners. Discuss the qualities it shares with novels set at the same historical moment. Does the author’s point of view and sensibilities differ from that of writers of the period? Does Cooney, for example, bring a contemporary
attitude or bias to her descriptions of events and characters?

17. To what extent is Charlotte’s story a product of her time and situation? What parallels are there between Charlotte’s life and the lives of women in novels set in this century? Has the feminist movement and the acceptance of female sexuality and desire fundamentally changed the relationships between the sexes? Do class, social position, and economic opportunities still play a role in what women aspire to or in what they are able to achieve in both their public and private lives?

Ellen Cooney is the author of five previous novels, most recently Gun Ball Hill. Her short stories have appeared in Glimmer Train, The Literary Review, and Ontario Review, among other publications. She has taught creative writing at MIT, Boston College, and Harvard. She lives in Phippsburg, Maine.