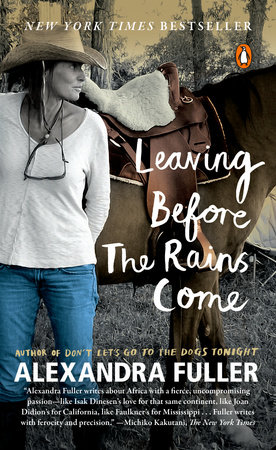 Born in England and transplanted to southern Africa by her expatriate parents while she was still a toddler, Alexandra Fuller is widely acclaimed as one of today’s most lyrical and compelling wordsmiths. In Leaving Before the Rains Come, the New York Times bestselling author explores how her disintegrating marriage to American Charlie Ross opened her eyes to her seemingly heedless father’s indelible brand of wisdom.
Living far from anything that even remotely resembled civilization, twenty-something Alexandra Fuller knew that most potential suitors would be unwilling to face the “hours of rough road” (p. 15) leading to her family’s farm in Zambia. Once a candidate arrived, he would then have to face “my family . . . an undertaking, an endurance test, for which no person could be expected to train” (p. 16).
When Fuller first met American Charlie Ross, he was “running rafting and canoe operations on the Zambezi and Luangwa rivers” (p. 11). Charlie was a decade older than Fuller and already a renowned adventurer who had lived in Africa for years. During their courtship, he calmly navigated their canoe straight through a pod of hippos and faced down an enraged elephant. Undaunted by anything—least of all the plainspoken Fuller clan—Charlie seemed like a perfect fit. They married just a year after they met.
Almost immediately, cracks in their relationship began to surface. Charlie liked quiet while Fuller liked noise. Charlie wanted servants; Fuller regarded them as her jail-keepers. Charlie began to transition from a life of adventure to one of stolid respectability. Fuller began to feel “as if, marrying Charlie, I had stepped across some invisible membrane into another country. This wasn’t my Zambia” (p. 135). Then she became pregnant.
Fuller initially fell in love with Charlie because he made her feel protected, something she never felt with her own father. Brash, impulsive, and focused wholly on the present, Tim Fuller has never been a man to consider his own—or his family’s—safety. Growing up, the Fullers lived in a constant state of financial uncertainty and understanding “clearly the ways in which we might die” (p. 119).
While their daughter, Sarah, was still an infant, Charlie decided to give up on his floundering safari business and relocate his family to the United States. Fuller found her new life, “a relief and a puzzle both” (p. 167). Even the open spaces of Wyoming seemed tame in comparison to her homeland. While Charlie became a real estate agent and Fuller cared for their growing family, she gradually began to realize that her marriage forced her to deny her true self as the daughter of Tim Fuller and a woman who needed to embrace life’s “sacred terror and beauty” (p. 205).
Honest, raw, and achingly funny, Fuller’s intimate account of her failed marriage will resonate with anyone who has ever fallen out of love and into self awareness. Interwoven with stories from her African childhood, Leaving Before the Rains Come is also an expatriate’s paean to her homeland and a daughter’s loving testament to her singular father.

1. When Vanessa calls Fuller to discuss their still-very-much-alive father’s funeral, she says, “because you know it’s going to be Alcoholics Unanimous from beginning to end” (p. 3). How does the Fuller clan’s casual relationship to excessive drinking compare to the typical American’s perspective?

2. In a passage that runs less than half a page, Fuller writes “Vanessa and I had both married men who looked like protectors. . . . [But] neither of those men could protect us when we had both most needed it, twenty years earlier in some dark corridor on the way to the neighbor’s lavatory, or in the spare bedroom of someone else’s unfamiliar house” (p. 107). What does Fuller’s casual revelation of sexual abuse tell you about her?

4. If Fuller and Charlie had stayed in Africa, might their marriage have had a better chance of surviving?

5. What is your take on Fuller’s assertion that “most Americans . . . were emotional conservatives, using time and their feelings frugally, selfishly” (p. 174)?

6. Does every married woman compare her husband to her father? Is the comparison ever fair to either?

7. When Fuller and Charlie take a six-month trial separation, her mother and sister take Charlie’s side and encourage her to return to him. Why do you think they did so?

8. Fuller acknowledges that she could never return to the Zambia she knew and loved. Have you ever returned somewhere you lived at an earlier stage in your life? Was it the same as you remembered it?

9. When Fuller first begins to seriously contemplate divorce, she turns to books such as, “The Emergency Divorce Handbook for Women; Helping Your Kids Cope with Divorce the Sandcastles Way . . .  [and] Coming Apart: Why Relationships End and How to Live Through the End of Yours” (p. 83). In your experience, can advice books like these offer support that friends and family cannot?

10. Which of Fuller’s stories most resonated with you? Why?

11. Have you read Fuller’s earlier memoirs? If so, did Leaving Before the Rains Come alter your opinion of Tim Fuller?

12. Discuss what Fuller means when she writes, “the only way to stop needing a mother ship was to become the mother ship yourself” (p. 154). At what point in life do we become capable of seeing our parents in their own humanity?

Born in England in 1969, Alexandra Fuller moved with her family to southern Africa in 1972. She lived in Africa until her midtwenties. She currently lives in Wyoming.

She has written four books of non-fiction, including Don’t Let’s Go to the Dogs Tonight: An African Childhood; Cocktail Hour Under the Tree of Forgetfulness; Scribbling the Cat: Travels with an African Soldier; and The Legend of Colton H. Bryant.

Fuller has also written extensively for magazines and newspapers including the New Yorker, National Geographic, Vogue, and Granta. Her reviews have appeared in the New York Times Book Review.
Learn More About Leaving Before the Rains Come
print

Glitter and Glue
Back to Top