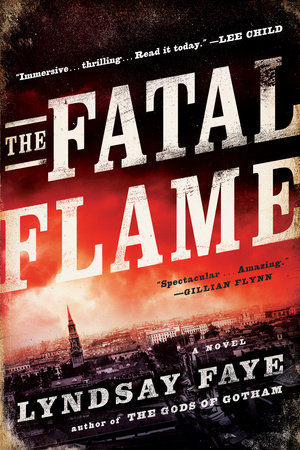 1)  The Potato Famine famously brought thousands of people to New York, like Dunla Duffy, who would otherwise have perished in Ireland.  They were greeted largely with disgust rather than welcome, and they lived in dire poverty. Can you think of other cultures whose immigration experiences have proved similarly difficult?  Do you know of any modern-day anecdotes that might likewise correspond?

2)  Women such as Ellie Abell and Sally Woods who endeavored to stake a claim for female rights were considered far more disgraceful than abolitionists, and in general male liberals flatly refused to assist them.  What explanations can you think of for this reluctance?  In what ways did the male protagonists of this book, Timothy and Valentine, also fail to regard women as equals?

3)  Timothy Wilde has a close relationship with Bird Daly, a child he met as she fled brothel work during The Gods of Gotham.  To what extent do you think her past captivity at the hands of Silkie Marsh affects how he treats her?  Do you think her dark experiences color any of his opinions about women in general, or about female rights in particular?

4)  Valentine Wilde makes a great many difficult decisions in this story when attempting to juggle his relationships with Tammany Hall, James Playfair, and Timothy, and he largely stands by his choices. Do you think his actions are justified under the circumstances?  Why or why not?  Do you think Valentine secretly regrets any of them?  Who or what do you think Valentine cares about the most?

5)  Tammany Hall strongly affected the dialogue among various political factions, controlling parts of the media and of the legislature.  Why do you imagine it was so powerful?  Do you see any parallels to similar forces in today’s politics or media, be they liberal or conservative?

6)  Sally Woods does many things her contemporaries find shocking, including running her own business and wearing trousers.  Were you sympathetic to her character or suspicious of her?  Why or why not?  Do you think Timothy is right in calling her trapped by love, and not fear, after the truth is discovered?

7)  Bird Daly is growing up quickly, and Timothy is fiercely protective of her as she matures.  To what extent do you think this is a story about major life transitions for Bird?  Or for Timothy, Elena, Mercy, or Valentine? Of the five characters, whose life do you think is changed the most at the end of the novel?

8)  James Playfair is in a relationship with a high-functioning drug addict.  Why does he stay, and why is their partnership long-standing?  Conversely, why would a Tammany insider like Valentine risk his reputation for James?  If you were surprised by their relationship, were you aware of Walt Whitman’s queer poetry written during the same period in New York City?

9)  Valentine Wilde has committed many sins according to Timothy, including indulgence in narcotics and alcohol, bribery, violence, whoring, gambling, theft, cheating, extortion, sodomy, forgery, lying, and murder.  How many of these acts do you consider sins?  How many do you think are justifiable due to Valentine’s motives?  Do you consider Valentine a good person, a moral reprobate, or something in-between?

10)  Mary Wollstonecraft in 1792 wrote, “My own sex, I hope, will excuse me, if I treat them like rational creatures, instead of flattering their fascinating graces, and viewing them as if they were in a state of perpetual childhood, unable to stand alone.”  How do you think Sally Woods, Silkie Marsh, or Elena Boehm would feel about this quote? How do these three women express feminism, and which do you think is the most successful?

11)  Mercy Underhill, by the end of the novel, is proven to suffer from a severe mental illness, possibly paranoid schizophrenia.  Aware that she would be cruelly mistreated in a madhouse and shunned by polite company, Timothy delivers her to Dr. Peter Palsgrave.  Do you think there is still shame attached to mental illness today?  Why or why not?  Do you think Timothy’s decision to entrust Mercy to Dr. Palsgrave was the best solution?

12)  In Seven for a Secret, Timothy says that Valentine never deliberately keeps secrets from him.  Is that true in this novel?  After James Playfair is severely injured, Timothy avoids telling Valentine about the attack.  Do you think he was right to respect James’s wishes, or wrong to keep Valentine in the dark?  If James had died, would your opinion differ?  Why or why not?

13)  Elena Boehm lists a number of cardinal differences between Timothy’s feelings for her and his feelings for Mercy, suggesting he would “prefer to find new lodgings than to stain [her] bedsheets.”  Do you agree or disagree with this assessment?  Elena also implies that Timothy wants Mercy to be obsessed with him.  Do you think Elena is right?  Why or why not?

14)  When Timothy finishes his last manuscript, he decides to give all three to Mercy Underhill and says, “We so stubbornly speak to each other in our best pet languages.  When really, how much simpler would it be to speak to the listener in his or her own?”  What do you think Timothy meant by this?  The novel is full of references to poetry and miscommunication and the real language of flash patter.  At what points do you think the characters’ use of “pet languages” is effective or ineffective?

Learn More About The Fatal Flame
print
Back to Top