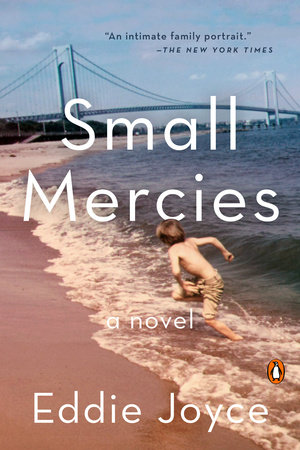 An introduction to Small Mercies, by Eddie Joyce

Like the borough of Staten Island where it is largely set, Small Mercies resides within the ghostly shadow cast by the World Trade Center in the wake of 9/11. Ten years after that horrific day, the Amendola family continues to mourn the death of their youngest son, Bobby. But as his son Bobby Jr.’s birthday party approaches, Bobby’s parents and brothers must find a way to accept that his widow, Tina, has fallen in love with a new man.

Michael Amendola, the son of Italian immigrants who settled in Staten Island, moved his Irish American wife, Gail, from Brooklyn to the Island after she became pregnant with their first child. In broken English, Michael’s mother, Maria, taught Gail how to bake ziti and cook the other hearty dishes that would sustain their growing family through good times and bad.

As much as Michael loved the Island, he hated the idea of joining his father in the family butcher shop. He yearned for something bigger. After serving in the Vietnam War, Michael met Gus Feeney, the legendary patriarch of a local firefighting clan, who inspired him to join the FDNY. Michael served for twenty-five years and was proud when Bobby followed in his footsteps. He knew it was a dangerous job, but never suspected that Bobby’s choice would eventually lead him into the collapsing skyscrapers.

Neither of Bobby’s two older brothers became firemen. Early on, Peter set his sights beyond the Island. After graduating from law school, Peter landed a job with one of Manhattan’s top corporate law firms. The workload was staggering, but he sacrificed time with his wife and children to put in the necessary hours. After 9/11, Peter tried to numb his grief through work, achieving a level of success that only increased the emotional distance between him and his working-class parents.

Franky had good looks and charm. He also possessed his maternal grandfather’s love of drink. If he was feckless before Bobby’s death, Franky nosedived after 9/11, binge drinking for days in a row, getting himself into some serious trouble, and making his mother worry she might lose another son.

Bobby was a senior in high school when he fell in love with Tina. His dreams were small, but he knew exactly what he wanted: to marry Tina, become a fireman, and raise a family on the Island. When the World Trade Center attack left Tina a widow, she was pregnant with Bobby Jr., and their daughter Alyssa was only a toddler. She spent years grieving, but meeting Wade, a widower, made her realize how lonely she’d been.

In the days leading up to Bobby Jr.’s party, Gail reflects upon their family’s past and the mistakes she’s made, real and imagined. As she comes to terms with Wade’s existence, Gail must also prepare the Amendola men for his presence at Bobby Jr.’s birthday party—and the change he heralds for them all. Heartrending and deeply layered, Small Mercies is an exquisite tribute to Staten Island and the bonds of family love—even as the most unthinkable of tragedies strains them to their limits.

1. Tina is worried about introducing Wade to her late husband’s family. Would the Amendolas have had an easier time accepting him if he had been from Staten Island?
2. Gail feels that the good things in life come too easily to Peter and that Franky is destined to be a screwup. Does she resent them because they are still alive and Bobby is dead? Is it possible for any parent to love all his children equally?
3. Gail and Michael both blame themselves for Bobby’s death, but in very different ways. Why do we so often feel compelled to punish ourselves for events that are beyond our control?
4. How might Bobby have felt about Franky’s taking his place as Tina’s husband? Would marrying Tina “save” Franky?
5. Is Peter aware that a small part of Gail wants him to suffer and learn humility? Is he a better person because of what happened between him and Gina?
6. What does the future hold for Peter and Franky? Do you agree with Gail that Peter will atone and eventually be forgiven? Will Franky be able to recover from what he regards as Tina’s betrayal?
7. Did Bobby’s death strengthen Gail and Michael’s marriage? Would they be happier if they moved to Florida and away from the site of Bobby’s death?
8. The phrase “small mercies” is repeated throughout the book and also serves as its title. How does your understanding of these words evolve over the course of the novel?
9. Eddie Joyce interweaves an evolving account of Cody’s basketball pool with the Amendolas’ family history and the events leading up to Bobby Jr.’s birthday party. Why is this important?
10. In many ways, Bobby is the novel’s most important character, but largely unknowable except through the memories of those who loved him. What does their collective portrait tell you about him? How accurate do you think their memories of him are?
11. Compare Small Mercies to any other 9/11 novels you’ve read. How well does Joyce handle the events of that day and its grim aftermath?
12. There was nothing private about losing a loved one as a result of the attacks on 9/11. How do you think being in the public eye affects a family’s ability to mourn?

Eddie Joyce was born and raised on Staten Island. A graduate of Harvard University and Georgetown University Law Center, Joyce practiced law—primarily white-collar criminal defense—in Manhattan for ten years. When his twin daughters were born in 2009, he left his job to stay at home to care for them while pursuing his dream of being a writer. He lives in Brooklyn with his wife and their three daughters.
Learn More About Small Mercies
print

Where You Once Belonged
Kent Haruf