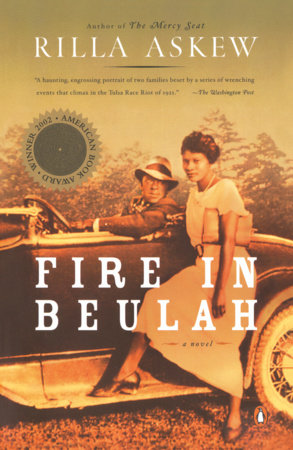 Against a backdrop of oil-boom opulence and racial distrust unfolds the story of two families, one black, one white, whose lives intersect in the tense early days of the Oklahoma oil rush. Fire in Beulah blends historical fact with fictional characters and events in a vivid, unblinking examination of heritage and race. At the novel’s center is the complex relationship between Althea, an oil wildcatter’s high-strung white wife, and her enigmatic black maid, Graceful. The two women bear the same family name, and this seeming coincidence binds them together in ways neither fully understands. Caught up in the inescapable currents of family and violence, their contrapuntal stories—and those of others close to them—sweep relentlessly toward the book’s climax in the Tulsa Race Riot of 1921.

Author Rilla Askew employs opposing points of view and the technique of twinning—paired, reflective narrative threads—to reveal how separate, even opposite, our understandings of the world can be. At the same time, a third thread—the story of Creek freedwoman Iola Bloodgood Bullet Tiger Long—also laces the book: a reflection of Oklahoma’s unique history as America’s three founding races came together in what has been called the nation’s great experiment of race. In the novel, the Old Testament word Beulah signifies the Promised Land that Oklahoma became for many early settlers, black and white, while the notion of Oklahoma as the Promised Land remains a bitter irony for the Native tribes who were forced there on the Trail of Tears.

Fire in Beulah is divided into five parts, each section denoting key elements in the narrative. Opening with a windswept landscape and a harrowing birth scene on the Whiteside homestead near Bristow in the section called Wind, the story jumps twenty years in the next section, Kin, to a wealthy oil wildcatter’s house in Tulsa, where the layers of kinship that underlie the story begin to be revealed, as two lynchings and two estranged brothers intrude on the two women’s lives.

The section called Beulah begins with a set piece: a memorial service in a black church on the prairie outside Arcadia. The exact center of the book, this passage is told by an unnamed narrator who appears here and nowhere else. The speaker is an articulate and insightful African American churchgoer who understands the significance of the scene, and it is here that the book’s overarching theme is revealed. The fourth section, Oil, unmasks the forces and consequences of greed unleashed in a no-holds-barred oil rush.

The last section, Fire, tells the story of the Tulsa Race Riot itself. As the riot unfolds, the novel’s various narratives come together in a cacophony of voices and visions. The conflagration in Greenwood becomes the crucible that melds and tests each of the characters, revealing the deep and simple truth at the heart of the American story: that we are all irrevocably tied to one another.

All of Rilla Askew’s books to date—Strange Business (1992), The Mercy Seat (1997), Fire in Beulah (2001), and Harpsong(2007)—have been set in her home state of Oklahoma. She was born in the Sans Bois Mountains in the southeastern corner, a fifth generation descendant of southerners who settled in Choctaw Nation, Indian Territory, in the late 1800s. Askew grew up fifty miles from Tulsa in the oil company town of Bartlesville, where she first encountered the complex forces of race, class, and societal opinion, elements she continues to explore in her fiction. She lived many years in the Cherokee capital of Tahlequah before relocating to Tulsa, where she graduated from the University of Tulsa with a degree in theater performance. In 1980 she moved to New York to pursue an acting career, but she soon turned to writing fiction and went on to study creative writing at Brooklyn College, where she received her MFA in 1989.

Askew’s collection of stories, Strange Business, received the Oklahoma Book Award in 1993, and one of its stories, “The Killing Blanket,” was selected for Prize Stories 1993: The O. Henry Awards. Her first novel, The Mercy Seat, which had its seeds in old stories about her family’s migration into Indian Territory, was nominated for the PEN/Faulkner Award, the Dublin IMPAC Prize, and received the Oklahoma Book Award and the Western Heritage Award in 1998. Fire in Beulah received the American Book Award from the Before Columbus Foundation and the Myers Book Award from the Gustavus Myers Center for the Study of Bigotry and Human Rights in 2002 and has been selected as the centennial book for Oklahoma’s One Book One State program for 2007. She is married to actor Paul Austin and they divide their time between Oklahoma, where she teaches at the University of Oklahoma, and their home in the Catskill Mountains in upstate New York.

Lie Down in Darkness

The Afterlife and Other Stories

Time Will Darken It

The Richer, the Poorer
Back to Top