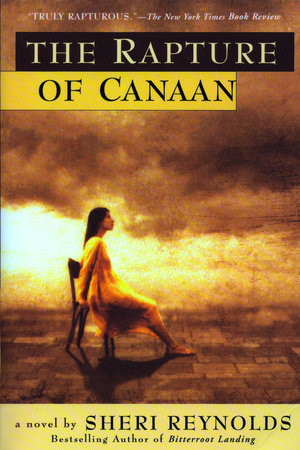 At the Church of Fire and Brimstone and God’s Almighty Baptizing Wind, nearly every pleasure is forbidden, and every action takes place under close scrutiny. Herman Langston, founder of this isolated Pentecostal community, believes he has structured an existence where his followers’ only thoughts are of preparing for God’s rapidly approaching Day of Judgment, “the rapture.”

But for Ninah Huff, Herman’s 14-year-old granddaughter, the world is a much more complicated place. Her passionate pursuit of righteousness has collided with her attraction to her young prayer partner, James. The consequences of their relationship rock the very foundation of the community, and the conception of their child is the catalyst for Ninah’s dramatic coming-of-age.

Told in Ninah’s clear, powerful voice, The Rapture of Canaan is the bittersweet story of a girl’s moving beyond the unquestioning acceptance of religion to a true, loving faith. In the process, she comes to learn that “what is normal is miraculous enough.”

Born in rural South Carolina, Sheri Reynolds now lives in Virginia. She has taught English at Virginia Commonwealth University, Old Dominion University, and The College of William and Mary. She is at work on a new novel.

“The newest and most exciting voice to emerge in contemporary Southern fiction.”—San Francisco Bay Guardian

Sheri Reynolds’s first novel is the compelling story of Jael, a woman born into a hard life made more difficult by the constant buzz of competing voices. Some are real, like those of the women in her incest-survivor group; others are more mysterious, like the Virgin Mary’s. But Jael is a survivor, growing stronger all the time…waiting for the day when the only voice she needs is her own…

Evening
Susan Minot
Back to Top