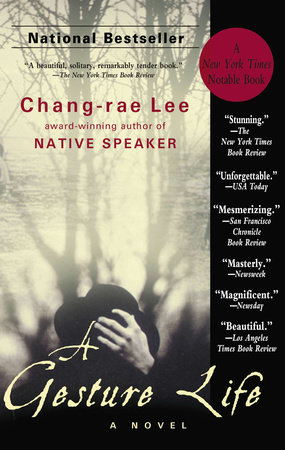 This acclaimed novel tells the story of Franklin “Doc” Hata, a Japanese immigrant who leads a proper, decorous life in a New York suburb. As his life slowly unravels, he is transported back to his days as a medic in the Japanese army in World War II, and his obsessive love of a young comfort woman.

Chang-rae Lee’s Native Speaker won the Hemingway Foundation/PEN award, QPB’s New Voices Award, the Barnes & Noble Discover Great New Writers Award, an American Book Award from the Before Columbus Foundation, and the Oregon Book Award. It was also an ALA Notable Book of the Year and a finalist for a PEN West Award, and Lee was named a finalist for Granta’s Best American Novelists Under 40 Award. His work has appeared in The Best American Essays, The New Yorker, The New York Times, and numerous anthologies. He lives in New Jersey, and is the director of the MFA program at Hunter College in New York City.

“Not since Kazuo Ishiguro’s Remains of the Day has there been a novel so attentive to the interplay of dark memory and light manners…a beautiful, solitary, remarkably tender book.”

“Exceptional…A beautifully tapestried story of seeking identity and acceptance in another culture while remaining separate from the tug of it.”

“A Gesture Life is the touching, multilayered rumination of an uneasy psyche. It is also a tragic, horrifying page-turner, whose evocation of wartime victims is unforgettable…a deeply involving tale.”

“Lee elegantly creates suspense out of the seemingly static story of a man trying hard not to feel…a wise and humane novel that amplifies the themes of identity and exile he addressed in Native Speaker, and creates a wonderfully resonant portrait of a man caught between two cultures and two lives.”

“Powerful…A Gesture Life is about what we lose when we lock up everything we have…the writing is sure and convincing, the characters vivid, and the war story unforgettable.”

The Shadow of the Crescent Moon
Fatima Bhutto
Back to Top