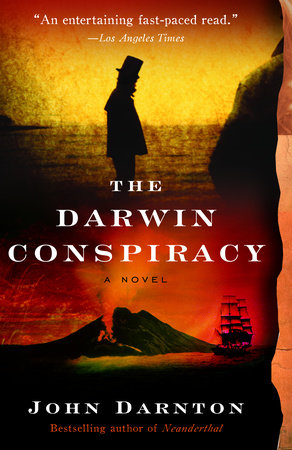 The introduction, discussion questions, author interview, suggestions for further reading, and biography that follow are meant to enhance your group’s discussion of John Darnton’s The Darwin Conspiracy, a novel that weaves a meticulously researched reconstruction of Charles Darwin’s life and work with some artful speculation about their lingering enigmas into a Hitchcockian historical and psychological thriller.

Charles Darwin cracked the world open with an idea so powerful that our society is still fighting over it. But why did he wait twenty-two years between the time he first conceived of the theory of evolution and actually published it?

Hugh Kellem, an aimless young American scholar hoping to establish himself by uncovering some neglected aspect of the Darwin enterprise, stumbles upon the secret journals of Darwin’s youngest daughter, Lizzie. Her writings not only reveal a young woman whose powers of observation and deduction may equal her father’s, but they also offer groundbreaking insight into Darwin’s household and his private journals written during his voyage on the Beagle. To complicate matters further, they expose a devastating secret which has been kept hidden for 150 years. Hugh’s new lover, winsome and intrepid scholar Beth Dulcimer, also has interests in Lizzie—some professional, some personal—and they threaten to turn the new lovers into rivals.

The final piece in this puzzle is Darwin himself. We meet him in1831, on the eve of his departure for South America, an impressionable and enthusiastic young man eager to make his name but cowed by his disapproving father. We follow him on his extraordinary expedition as he sails across the Atlantic, makes landfall in hellish Tierra del Fuego, and forges up the continent to the Galapagos Islands, collecting the exotic life-forms that provide him with the critical evidence for what will become the theory of evolution. But even as the young naturalist plunges into the work of science, he is also drawn into a maze of violent rivalries, petty deceptions, and jealously guarded secrets.

1. We first meet Hugh Kellem while he is conducting research on an island so small and bleak that it is known only as “Sin Nombre,” Spanish for “no name.” Toward the novel’s end—which paradoxically falls 170 years earlier—Darwin will arrive at the same island. At what other points in this novel does Hugh reenact episodes of Darwin’s life? Does Lizzie’s narrative also echo her father’s, or does it anticipate Hugh’s? In what ways does Darnton use his novel’s parallel storylines to build mystery and suspense or deepen the exploration of certain themes? How would this novel be different if it unfolded in a single time period or was told from a single point of view?

2. Darwin came to the Galapagos carrying just one book: Paradise Lost. How does that book, which tells the story of Lucifer’s rebellion and the temptation and fall of man, forecast themes in Darwin’s narrative and in those of Lizzie and Hugh? Is nature this novel’s paradise, and if so, how is it lost? How do you interpret the scene on page 223 that begins with an encounter with giant tortoises and ends with a tableau of their butchery? What are we to make of Darwin’s later outburst: “What a book a Devil’s chaplain might write on the clumsy, wasteful, blundering, low and horridly cruel works of nature!” [p. 225]?

3. Darwin’s overbearing father almost prevents him from shipping out on the Beagle, but at the last minute he secures his permission. How is he able to do this? In undertaking his epic voyage, is Darwin trying to live up to his father’s expectations or subtly defy them? How are other characters in the novel affected by their fathers? Who succeeds in breaking free of the paternal spell and who succumbs to it?

4. Both Hugh and Lizzie are overshadowed by siblings who are older, seemingly more gifted (Lizzie is known to posterity as “slow”), and more loved. How does this shape their respective characters? How does each adapt to his or her status? Compare Cal’s ambiguous role in Hugh’s expulsion from prep school to Lizzie’s love affair with her sister’s fiancé. Is Darwin’s relationship with McCormick also a form of sibling rivalry? In what ways do the veiled and often unconscious struggles between competing siblings, real or symbolic, replicate the warfare in nature?

5. As a child, Darwin is said to have told fibs, a habit he has since outgrown. How does this detail foreshadow his later actions? When does the adult Darwin first engage in an act of deception? Is he simply defending himself against McCormick’s attempts to undermine him? Does this novel portray Darwin as fundamentally dishonest, or is he someone who becomes dishonest in a moment of weakness and then feels driven to perpetuate his deceptions? Are we meant to see him as evil or simply flawed? How would you compare what Darwin does with Cal’s doctoring of experimental results, Hugh’s theft of Lizzie’s journals, or Lizzie’s subterfuges? What are the consequences of their respective acts of dishonesty?

6. Why does Captain FitzRoy object so violently to natural law and transmutation, the ideas that preceded the theory of evolution? Are Darwin’s discoveries really inimical to religious faith or only to a particular kind of faith, and if they are so heretical why do they become more widely accepted, even in his lifetime? Why do you think evolution is more controversial today than it was thirty or forty years ago? Does Darwin lose faith because of what he apprehends about nature or because of what he learns about his own nature?

7. While Darwin is collecting specimens, FitzRoy describes himself as a “naturalist in reverse” [p. 72], because the Captain proposes to return three he “collected” on an earlier voyage. The specimens are, of course, human beings, the Indians Jemmy Button, Fuegia Basket, and York Minster. What are the consequences of their kidnapping and repatriation? In returning them to their home, FitzRoy is not just being altruistic but undertaking missionary work. Discuss the ways that science and religion intertwine in the course of the voyage and to what ends.

8. As a youngster, Lizzie Darwin seems to have possessed the same traits that made her father an outstanding naturalist. But as a young woman, she has turned to “ferreting out the secrets of others” [p. 61]. What parallels does Darnton draw between Darwin’s pursuit of the inner workings of nature and his daughter’s pursuit of the inner workings of her family? Does Lizzie choose that path because Victorian society barred young women from a career in science? In what other ways is she thwarted by the sexual mores of her time? Can we view her investigation of her family’s secrets as an unconscious protest against her status? What do you make of the fact that she loses her virginity almost immediately after discovering the truth about her father’s past?

9. Among the many things that Darwin dislikes about McCormick is the fact that he is “lower class” [p. 125]. How does class figure in this novel? How does it determine the prejudices and behavior of its characters? How are the cruelties of the English class system mirrored by other systems of inequality and oppression, such as slavery, the subjection of women, or the extermination of Indians? (Of all the novel’s characters, Darwin alone seems singularly insensitive to the fate of Jemmy Button.) In what ways can Darwin’s findings be seen as challenges to the old hierarchies? In what ways can they be seen as justifying human predation and exploitation, which might be explained away in some circles as “survival of the fittest”?

10. On board the Beagle, Jemmy Button is enraptured by what Darwin’s lessons in “sigh-eenz” [p. 99]. Yet following his return to Tierra del Fuego, he rejects both science and his new name. What is responsible for his disillusionment? How do you interpret the note Hugh finds in his hand: “I seen your ships. I seen your cities. I seen your churches. I meet your Queen. Yet you Inglish know life less as we poor Yamana” [p. 155]. Is Jemmy right?

11. While reading Lizzie’s journals, Hugh, who has the benefit of knowing how her life will turn out, feels as if he is “seeing a speeding car and knowing that it is soon to crash. Possessing that knowledge was like being God” [p. 163]. Does reading this novel, so much of which is grounded in fact, place the reader in a similar position? Discuss the appeal of historical fiction and its peculiar tension between the known and the unknown, the factual and the invented.

John Darnton has worked for thirty-nine years as a reporter, editor, and foreign correspondent for The New York Times. He is now an associate editor at the paper. He was awarded two George Polk Awards for his coverage of Africa and Eastern Europe and the Pulitzer Prize for his stories smuggled out of Poland during the period of martial law. He lives in New York. He is the son of Byron Darnton, a war correspondent for The New York Times, who was killed in New Guinea in October 1942.

The Passages of H.M.
Jay Parini

Bluebird, or the Invention of Happiness
Sheila Kohler

The Fall of Troy
Peter Ackroyd

The Judges of the Secret Court
David Stacton

The Clouds Beneath the Sun
Mackenzie Ford

Song of the Forest
Colin Mackay

Come and Get It
Edna Ferber
Back to Top