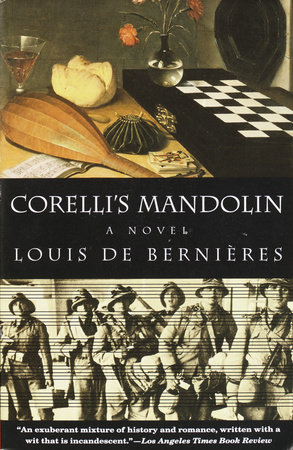 The questions, discussion topics, and author biography that follow are intended to enhance your group’s reading of Louis de Bernieres’s Corelli’s Mandolin. We hope they will give you a number of angles from which to look at this rich and exciting novel.

De Bernieres’s story takes place on Cephallonia, a small Greek island that is still, in the years before World War II, touched with all the magic of Greek legend, and suffused with a light that is “as though straight from the imagination of God in His youngest days, when He still believed that all was good” [pp. 6-7]. There the elderly Dr. Iannis and his beautiful daughter, Pelagia, enjoy an idyllic existence, and at the age of seventeen Pelagia falls in love and becomes engaged to a handsome young fisherman, Mandras.

But in 1940 the Italians attack Greece, and the violent reality of the war disrupts the villagers’ quiet lives and changes them forever. Mandras leaves Cephallonia to go to war, and upon Greece’s defeat by the Axis the island is occupied by Mussolini’s army. One of the Italian officers is billeted with Dr. Iannis: Antonio Corelli, a high-spirited and generous young man who plays the mandolin like an angel and inspires impromptu opera performances among his troops. Nominally an invader, an enemy to the Cephallonians, Corelli soon becomes a cherished member of their community and Pelagia inevitably becomes fascinated by him with all his promise of music, love, and joy.

The defeat of the Italian army at the hands of the Allied forces brings new traumas and dilemmas for Pelagia and Corelli, as the Germans rout their erstwhile Italian allies with a series of hair-raising murders and atrocities, and, after the armistice, Greece herself is plunged into a brutal civil war between Communist and royalist forces. Pelagia’s optimism and love of life is challenged as she suffers dreadful losses, but her courage and tenacity sustain her, and finally her lifelong search for love does not go unrewarded.

1. What understanding does Pelagia have of love as a young girl? How do her ideas come to change during the course of the novel? What is Carlo Guercio’s definition of love? How does it guide his actions throughout the story? What is the difference between the love he feels for Francisco and that which he feels for Corelli? How might the other characters define love? Which of them lives up to his or her conception of it?

2. Why do you think de Bernieres chose to make his romantic hero a musician? Why is music, of all the arts, a potential healer of international folly and strife? What significance does Corelli’s composition “Pelagia’s March” carry within the narrative?

3. After Mandras tries to rape Pelagia, he is very decisively rejected not only by Pelagia but by his own mother. Does Drosoula’s rejection of her son strike you as reasonable or heartless? As natural or unnatural? Was Mandras irredeemably lost at this point, or might he perhaps have been saved?

4. What is the role of the Church in Cephallonian life? What does pragmatic toleration of the drunken Arsenios say about the islanders’ culture, their character, and their religion? How does Arsenios repay their tolerance? Does the palpable presence of the ancient deities alongside the Orthodox ceremonial enrich the Greeks’ faith or dilute it? What importance does the cult of Saint Gerasimos have for the islanders? What interpretation do individual characters such as Dr. Iannis and Pelagia give to the saint’s miraculous “cures”?

5. Dr. Iannis writes that the island of Cephallonia is “so immense in antiquity that the very rocks themselves exhale nostalgia and the red earth lies stupefied not only by the sun, but by the impossible weight of memory” [p. 5]. How does their awareness of the island’s history and prehistory color the way the Cephallonians see themselves? Does it help them to come to terms with their traditional roles in life? What attitude does it give them toward their recent conquerors?

6. “Honour and common sense; in the light of the other, both of them are ridiculous” [p. 320]. What does de Bernieres mean by this? How do the novel’s events confirm or illustrate this statement? Do you find that in certain of the novel’s characters these two qualities are not, in fact, mutually exclusive?

7. Carlo Guercio memorably describes the war as “frivolous” [p. 116]. What does he mean by this? How is the quality of frivolity exemplified in the actions of the military leaders and those who follow them? Do you find the adjective an appropriate one for the war described in these pages?

9. During World War II, atrocities and betrayals were committed on an unprecedented scale. De Bernieres explores the psychology of those who committed those atrocities through several of his characters. Mandras’s justification that “it was Hector who was the executioner and he was only the hand” [p. 193] was a common one among Nazi, Fascist, and Communist executioners. How does this justification differ from Gunter Weber’s traumatic decision to obey Hitler’s order for the massacre of Italian soldiers? Why is Gunter characterized as a “good Nazi”? Is this appellation entirely ironic?

10. Do you find de Bernieres’s use of national stereotypes to be effective within his fictional scheme? To what degree can Dr. Iannis be seen as the personification of Greece, Corelli as the spirit of Italy? Do they succeed as three-dimensional characters as well? Do Pelagia’s and Corelli’s guilt-induced decisions to refute their own nationalities make them any the less “Greek” or “Italian”?

11. Dr. Iannis finds that in writing his history, “objectivity seemed to be quite unattainable” [p. 4]. Carlo says that history tends to be “the propaganda of the victors” when it should consist “only of the anecdotes of the little people who are caught up in it” [p. 33]. Does de Bernieres confront these problems in the way he writes his own historical novel? What narrative techniques does he employ in telling his story? In his Author’s Note, de Bernieres describes history as “hearsay tempered with myth and hazy memory” [p. 436], yet he himself has in fact remained very faithful to the historical facts as we know them. Why, then, does he offer this apology? Are myth and history significantly differentiated by de Bernieres? By Iannis? By Pelagia?

12. Did Pelagia believe that Corelli died during the war? If not, why does she not leave Cephallonia and try to find him? Does her remaining at home denote passivity or ambivalence about their relationship? What about Pelagia’s initial rage at Corelli when they meet again–do you feel that her anger is excessive, or that possibly she is not angry enough?

13. In Pelagia’s youth no woman was allowed to enter a kapheneia; thirty years later, the elderly Drosoula runs her own taverna and young Antonia is a successful businesswoman. Changes in social mores might not have manifested themselves as dramatically on Cephallonia during the postwar years as they did in more cosmopolitan areas, but they were in fact radical and profound. How does everyday life on Cephallonia reflect these changes? What role, if any, did the 1953 earthquake play in changing the island, and in the shift in generations? Does de Bernieres imply that the changes are for the better, or for the worse? Or, perhaps, that in essence life has not changed very much at all?

14. Does the happy ending conform with the plot and spirit of the entire novel, or does it represent a shift into a more fantastic, less realistic mode? Do you find it to be an appropriate or an inappropriate conclusion to Pelagia’s and Corelli’s story?

15. In what way are the novel’s characters directly or indirectly compared with figures from Greek mythology? Among the Cephallonians, what modern manifestations do we find of Apollo, Aphrodite, Penelope, Odysseus, Hercules, and other mythological figures? What message about time and change does de Bernieres convey through these parallels?

16. De Bernieres chooses his characters’ names with care. What significance can you ascribe to particular names, such as Pelagia, Mandras, Hector, Corelli, Weber?

17. Why do you think de Bernieres has chosen the Humbert Wolfe poem “The Soldier” to launch his narrative? Which themes in the poem are explored in the novel itself? Perhaps the most famous war poem in the English language, by Rupert Brooke, is also called “The Soldier.” How does Wolfe’s poem comment upon Brooke’s? How might the various soldiers in Corelli’s Mandolin respond to the assertions made by both poets? Is the kind of idealism glorified by Brooke finally meaningless, as many of his contemporaries, physically and emotionally crushed by World War I, came to find it? Or is it in fact a valuable characteristic, at least within de Bernieres’s moral scheme?

Louis de Bernieres is English, and was born in 1954. He spent four months in the British army, then moved to Colombia, where he worked both as a teacher and as a cowboy. Upon his return to England he took numerous jobs, with stints as a mechanic, a groundsman, a landscape gardener, and a teacher of truants. In the early 1990s, prior to Corelli’s Mandolin, he published a trilogy of tragicomic novels set in Latin America.
Learn More About Corelli’s Mandolin
print

The King at the Edge of the World

Confessions of the Fox

Legacy
Back to Top