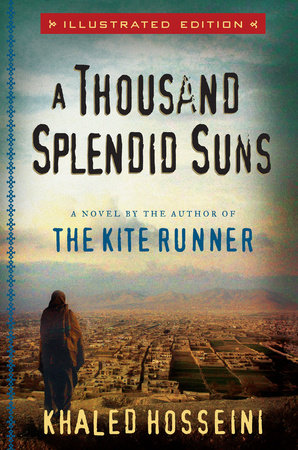 After 103 weeks on the New York Times bestseller list and with four million copies of The Kite Runner shipped, Khaled Hosseini returns with a beautiful, riveting, and haunting novel that confirms his place as one of the most important literary writers today.

Propelled by the same superb instinct for storytelling that made The Kite Runner a beloved classic, A Thousand Splendid Suns is at once an incredible chronicle of thirty years of Afghan history and a deeply moving story of family, friendship, faith, and the salvation to be found in love.

Born a generation apart and with very different ideas about love and family, Mariam and Laila are two women brought jarringly together by war, by loss and by fate. As they endure the ever escalating dangers around them-in their home as well as in the streets of Kabul-they come to form a bond that makes them both sisters and mother-daughter to each other, and that will ultimately alter the course not just of their own lives but of the next generation. With heart-wrenching power and suspense, Hosseini shows how a woman’s love for her family can move her to shocking and heroic acts of self-sacrifice, and that in the end it is love, or even the memory of love, that is often the key to survival.

A stunning accomplishment, A Thousand Splendid Suns is a haunting, heartbreaking, compelling story of an unforgiving time, an unlikely friendship, and an indestructible love.

Khaled Hosseini was born in Kabul, Afghanistan, in 1965. His father was a diplomat with the Afghan Foreign Ministry and his mother taught Farsi and History at a large high school in Kabul. In 1970, the Foreign Ministry sent his family to Tehran, where his father worked for the Afghan embassy. They lived in Tehran until 1973, at which point they returned to Kabul. In July of 1973, on the night Hosseini’s youngest brother was born, the Afghan king, Zahir Shah, was overthrown in a bloodless coup by the king’s cousin, Daoud Khan. At the time, Hosseini was in fourth grade and was already drawn to poetry and prose; he read a great deal of Persian poetry as well as Farsi translations of novels ranging from Alice in Wonderland to Mickey Spillane’s Mike Hammer series.

In 1976, the Afghan Foreign Ministry once again relocated the Hosseini family, this time to Paris. They were ready to return to Kabul in 1980, but by then Afghanistan had already witnessed a bloody communist coup and the invasion of the Soviet army. The Hosseinis sought and were granted political asylum in the United States. In September of 1980, Hosseini’s family moved to San Jose, California. They lived on welfare and food stamps for a short while, as they had lost all of their property in Afghanistan. His father took multiple jobs and managed to get his family off welfare. Hosseini graduated from high school in 1984 and enrolled at Santa Clara University where he earned a bachelor’s degree in Biology in 1988. The following year, he entered the University of California-San Diego’s School of Medicine, where he earned a Medical Degree in 1993. He completed his residency at Cedars-Sinai Hospital in Los Angeles and began practicing Internal Medicine in 1996. His first love, however, has always been writing.

Hosseini has vivid, and fond, memories of peaceful pre-Soviet era Afghanistan, as well as of his personal experiences with Afghan Hazaras. One Hazara in particular was a thirty-year-old man named Hossein Khan, who worked for the Hosseinis when they were living in Iran. When Hosseini was in the third grade, he taught Khan to read and write. Though his relationship with Hossein Khan was brief and rather formal, Hosseini always remembered the fondness that developed between them.

In 2006, Hosseini was named a goodwill envoy to the UNHCR, The United Nations Refugee Agency. His new book, A Thousand Splendid Suns, will be published in May 2007.