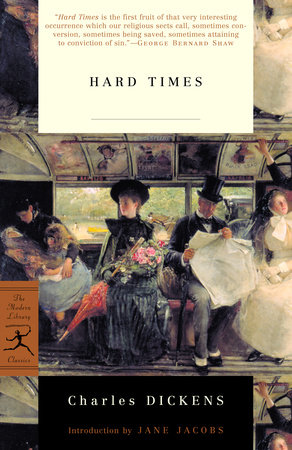 1. Did Dickens have a clear purpose in writing Hard Times? Was Hard Times primarily an exhortation to solve the problems faced by
nineteenth-century England, or was his subject matter merely a vehicle that allowed him to write a humorous story using the familiar character types of his day? Do you consider Dickens primarily to be an activist? A social critic? A humor writer?

2. Describe the relationship of Mr. and Mrs. Gradgrind. Why is Mr. Gradgrind’s philosophy lost on Mrs. Gradgrind? What accounts for her total lack of understanding?

3. In the first few words of Hard Times, in the title to the first book, "Sowing," there is a biblical allusion. Hard Times ends with another biblical allusion in the penultimate paragraph, where Dickens refers to the "Writing on the Wall." Biblical references are made throughout the novel, and Christian sentiment is appealed to constantly. How important are Christian underpinnings to Dickens’s moral message? Do Dickens’s criticisms and appeals go beyond the religious? If so, what other moral ideals are put forth in Hard Times, and what are their implications?

4. Coketown is, of course, a wholly fictitious city. However, it is a microcosm of England during the time of the Industrial Revolution and is modeled on cities that existed at the time. What are the problems of Coketown, and what are the causes of these problems? As a community, does Coketown accurately or inaccurately portray the ills of nineteenth-century English industrial cities? Does the creation of this fictitious town make Dickens’s satire more effective than if he were to situate it in a real city? Why?

5. Since the conditions of life in English factory towns have changed, and many years have passed since the writing of Hard Times, what can be said to be the book’s lasting value? Is it primarily historical, painting a picture of the way life was at one time? Is it moral or philosophical? Are the aspects of the novel that were important at the time of its publication still the ones that are valued today?

6. Are Rachael and Stephen realistic characters, even in the context of a satirical novel? What purpose do they serve to the novel as a whole, and which characters are they most starkly contrasted with? How does the scene of Stephen’s death stand out in the novel? How is it important to the overarching themes Dickens is trying to convey?

The Turn of the Screw and Other Short Novels

The History of Mr Polly

Washington Square
Back to Top