The Vine of Desire Reader’s Guide 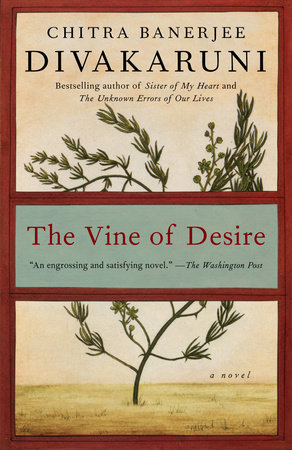 The Vine of Desire Reader’s Guide

The introduction, discussion questions, suggested reading list, and author biography that follow are intended to enhance your group’s reading of Chitra Banerjee Divakaruni’s poignant new novel, The Vine of Desire. This potent, richly textured work by an award-winning writer adroitly explores the fragility of love and of friendship, the agonizing cruelty of temptation, and the struggle for ordinary people to carve a life for themselves in the world.

The Vine of Desire picks up where Divakaruni’s bestselling novel, Sister of My Heart, left off, continuing the saga of Anju and Sudha, the now-grown cousins and best friends from Calcutta, India. After their joint arranged marriages in Calcutta, the spirited and independent Anju had followed her husband, Sunil, to San Francisco, while the beautiful Sudha had remained behind in India with her husband. For the first decade of their married lives, the two women followed individual paths, but personal tragedies—Anju’s miscarriage and Sudha’s divorce—result in their long-awaited reunion in America. When The Vine of Desire begins, Sudha and her newborn daughter are on their way to San Francisco where they will live with Sunil and Anju. Anju hopes to help Sudha start a new life in America, away from the stigma of divorce, and Sudha hopes to help her dear friend overcome the pain of losing her baby. At first, the women are overjoyed to see one another, and their bond seems strong enough to suggest that each woman’s unselfish goal is possible. But Anju’s startling realization of her husband’s passionate obsession with Sudha shatters any illusions and causes a seemingly irreparable rift between the two friends. Tormented respectively by guilt and bitter jealousy, Sudha and Anju must individually grapple with both their inner pain and the outside pressures of frenetic, impersonal city life in America as they journey toward independence. Ultimately, the women are forced to look beyond the destructive circle of love, passion, and hurt and form a new relationship as the antidote to their suffering. Only then are they able to find a way to reconcile their ties to the past and to resolve their friendship.

1. Anju tells her unborn son, Prem, stories of who she “used to be before the accident of America happened to [her]” [p. 12]. What does she mean by “the accident of America?” How are Sudha’s and Anju’s assimilation into American culture affected by the different circumstances that lead them there in the first place? Why does Sudha choose to return to India, while for Anju the idea of returning to India does not even seem to cross her mind?

2. How is the process of assimilation different for Anju, Sunil, Lalit, Trideep, and Sudha? Why are some more successful than others? Do the characters identify as “Americans” or as “Indian-Americans?” What do incidents such as Sunil’s attacking the valet at the party for making derogatory comments about Indians [p. 138] and Anju’s sensitivity about the portrayal of Indians in the movies her schoolmates attend [pp. 213–4] demonstrate about their comfort with their place in America?

3. Divakaruni marks pivotal moments in each of the characters’ lives with references to significant current events. For example, while Anju anxiously anticipates Sudha’s arrival, Divakaruni writes: “It is the year of dangerous movements. Two weeks back, a major earthquake hit Los Angeles” [p. 11]. And, upon Sudha’s attending the party with Sunil and Anju, Divakaruni writes: “It is the year of taking risks, of facing consequences. In Bangledesh a woman writer criticizes the Quran and must go underground to escape the fatwa. In Abidjan a twenty-year ban against big-game hunting is lifted in the hope of attracting tourist money” [p. 127]. (See also pp. 97, 241, and 294) How do these global events inform the reader about the events taking place in the lives of the central characters? Placed in such a context, do the events in Anju’s and Sudha’s lives seem more or less significant? What does this global context signify about an individual’s relationship to the rest of the world? In what other ways does Divakaruni relate her characters’ private lives to the public world?

4. How do Sunil, Anju, and Sudha each interpret the O. J. Simpson trial in light of the events taking place in their personal lives? How might Anju or Sunil answer Sudha’s question: “What was the point of filling our head with their troubles?” [p. 111] How might Sudha answer her own question by the end of the novel?

5. One recurring theme is the difficulty the characters have in communicating with the people closest to them. What causes this inability to communicate? Of what might they be afraid? Should some things simply not be said? How effective are the other methods they use to communicate their feelings, such as Anju’s essays and letters or Sunil’s use of a movie plot to explain his feelings to Anju [pp. 234–6]? Is it easier for Sudha to communicate with strangers like Sara, Lalit, and Myra than with Sunil or Anju, and, if so, why?

6. Several characters in the novel experience emotional isolation. For example, Sudha thinks about the change in hers and Anju’s relationship: “Only now, in its loss, I know the value of what the two of us had. A metallic fog has wound itself around me. Is this how other people go through their lives? Hearing dimly, feeling less?” [p. 109] And, later, as Anju packs Sunil’s items in their old apartment she hears: “The newscaster announces another suicide bombing in Tel Aviv, a bus blown up this time, killing twenty-one and wounding forty-five. . . . Anju recognizes this as a tragedy far worse than what she is undergoing. . . . But her capacity for compassion has shrunk, somehow. Now she cannot relate to anything beyond the distraught confines of her own skin” [p. 300]. What causes this emotional isolation and can it be overcome? If so, how?

7. What mood is conveyed by the frequent references to the characters in conjunction with various modes of transportation, such as on the freeway [e.g., p. 123] or in an airport, [e.g., p. 294]? What do these images convey about life in San Francisco or in America? What do they relate or reflect about the characters’ emotions?

8. What are the different types of love explored in The Vine of Desire? What emotional and physical desires do the characters confront? Does love diverge from or intersect with these desires? Are these loves or desires within the individual’s control?

9. Is Sunil a sympathetic character? How might his behavior toward Sudha and Anju be characterized? Can he help his behavior? Does he pay for his actions? Are Sudha’s desires [see p. 335] understandable? Is Sudha really “immoral,” as she considers herself to be [p. 297]? What, if anything, should Sudha or Sunil have done differently? How does The Vine of Desire force the reader to reexamine his or her views on adultery, divorce, and marriage?

10. How does motherhood change Sudha’s life? And, conversely, how does not becoming a mother affect Anju’s life? Does Sunil’s paternal relationship with Dayita change him in any way?

11. How are families formed and how are they defined in the novel? Just as her mother had done in Calcutta, Anju accepts Sudha and Dayita into her home. Under what circumstances could Anju, Sunil, Sudha, and Dayita constitute a family? Why can’t the woman who saved Anju from suicide and with whom she shares a house ever really be a family to her [p. 302]? Could Sudha, the old man, and Dayita ever form a “family”?

12. Divakaruni employs a rich and original narrative style. She often switches the first-person narration between the voices of Sudha, Anju, and Sunil. She employs different devices to advance the plot and convey the inner thoughts of her characters, such as letters [e.g., pp. 71–6], unspoken dramatic subtext such as in the Lalit/Sudha conversations [e.g., pp. 181–5], and Anju’s stories [e.g., pp. 163–6]. Periodically, a third-person narrative voice intrudes on the fiction. For example, when Sunil is breaking up with Anju and he looks at the clock and thinks he will be late for work, the anonymous narrator asks, “Can we forgive him that glance, the way one forgives a nervous tic?” [p. 237] How is Divakaruni’s style effective in communicating the feelings of the characters and reinforcing the themes of the novel? Are her original methods more or less effective than more traditional methods of narration?

13. The opening quotation from “Late Fragment,” by Raymond Carver reads: “And what did you want? To call myself beloved, to feel myself beloved on the earth.” What do Anju and Sudha want? How do these wants change or evolve from the opening page of the novel to its end?

14. Book Two is inscribed with a quotation from Leslie Marmon Silko’s Almanac of the Dead, as follows: “One day a story will arrive at your town. It will come from far away, from the southwest or the southeast—people won’t agree. The story will arrive with a stranger or perhaps with a parrot trader. But when you hear this story, you will know it is the signal.” To what in The Vine of Desire might the “story” refer, or symbolize? What might it be signaling?

Chitra Banerjee Divakaruni is the bestselling author of the novels Sister of My Heart and The Mistress of Spices; the story collections The Unknown Errors of Our Lives and Arranged Marriage, which received several awards, including the American Book Award; and four collections of prize-winning poetry. Her work has appeared in The New Yorker, The Atlantic Monthly, Ms., Zoetrope, Good Housekeeping, O: The Oprah Magazine, The Best American Short Stories 1999, and The New York Times. Born in India, Divakaruni lives near Houston.