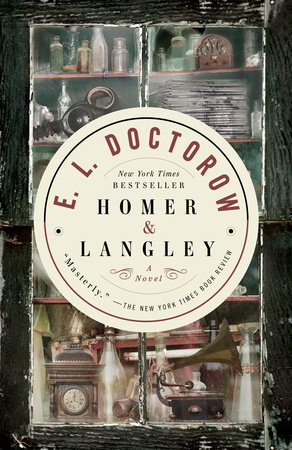 1. Homer & Langley was inspired by the real-life Collyer brothers—recluses who actually lived in a Fifth Avenue townhouse filled with rubble until their deaths in the late 1940s. Doctorow took some creative liberties in his retelling of their story—namely, extending the brothers’ lives by several decades. Why do you think Doctorow made these factual changes, and how would you say this affects the impact of their story as a whole?

2. Why do you think Doctorow chose to write from Homer’s point of view? How would the novel have been different if Langley was the narrator?

3. Homer and Langley lose their parents to Spanish influenza while Langley is abroad fighting in World War I. Do you think the brothers’ lives would have been different had their parents survived? How? How did the war affect Langley?

4. Describe Homer and Langley as individuals. How do they change over the course of the novel? How do their opinions of the outside world change? How does their relationship as brothers change?

5. Langley’s hoarding escalates to a new level when he installs a Model T Ford car in the dining room. Grandmamma Robileaux thinks the appearance of the Ford is a sure sign that Langley is completely out of his mind. Homer says, “My brother is a brilliant man. There is some intelligent purpose behind this, I can assure you” (79). Is Homer right? Is there a purpose behind Langley’s compulsions? Or is he out of his mind, as Grandmamma fears?

6. A central component of the novel is Langley’s “Theory of Replacements,” which he explains to Homer before going off to war: “Everything in life gets replaced. We are our parents’ replacements just as they were replacements of the previous generation” (14). Langley continues to develop his theory throughout the novel, and it is the basis for the master newspaper he is creating, which will be “one day’s edition of a newspaper that could be read forevermore as sufficient to any day thereof” (48). What do you make of Langley’s “Theory of Replacements”? How does it evolve throughout the course of the brothers’ lives?

8. Things take a turn for the worse when Grandmamma Robileaux goes back to New Orleans. Homer reflects: “Grandmamma had been the last connection to our past. I had understood her as some referent moral authority to whom we paid no heed, but by whose judgments we measured our waywardness” (100). What do you make of this statement, knowing how things end up for the Collyer brothers? If Grandmamma had stayed in the house, would things have been different?

9. Homer loses his eyesight while he is still quite young, but his other senses are quite advanced. In conversation with his brother, Langley tells him, “Among the philosophers there is endless debate as to whether we see the real world or only the world as it appears in our minds, which is not necessarily the same thing” (47). Homer responds, “Well, maybe it’ll turn out I have eyes as good as anyone’s” (47). Discuss the issue of sight and perception, and how it plays out in the novel.

10. Until they are shut down by the police, the Collyer brothers host tea dances in their home as an opportunity for neighbors to drink, listen to music, and cut loose. How did you reconcile the reclusive figures at the end of the novel with the livelier men who hosted these neighborhood social events?

11. The brothers both have complicated—and ultimately unproductive—relationships with women throughout the book. Discuss the various women in their lives: from Julia to Mary Elizabeth Riordan to Lila van Dijk to Anna to Jacqueline. Why do you think neither man ever found lasting love?

12. What did you make of Homer’s relationship (or lack thereof) with Jacqueline Roux, his “muse”?

13. At the end of the novel, the brothers are together in the house, but alone with their thoughts in different rooms. The final sentence is chilling, as Homer asks, “Where is my brother?” (208). What did you think of novel’s conclusion?

14. Through the eyes of the Collyer brothers, Doctorow shows us a vision of New York City from the 1930s through the 1960’s. Discuss the different eras and the historical significance of each.

The Conservationist
Back to Top