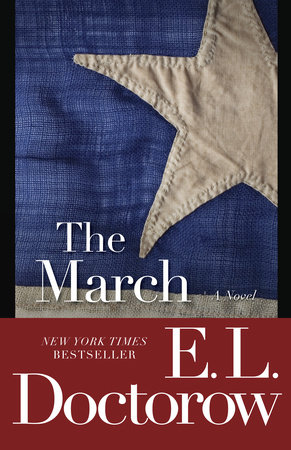 The discussion questions were developed by book clubs across the country who read The March and collectively drafted questions for us.

One of the most interesting subplots in The March is the relationship between Pearl and the Yankee soldiers who take her under their wings. Do you find these relationships believable? In particular, would a soldier such as Stephen Walsh really consider marrying Pearl, and possibly having a clearly mixed-race child, at this time in history?

The Yankee generals are beautifully drawn characters. Is General Kilpatrick a mostly an admirable or dishonorable man, given his role in history? Why did Sherman say he wouldn’t trade him for anyone else?

Sherman believed that his every move being reported gave him a disadvantage in the war. Many military leaders still feel that way today. Discuss the push and pull between the military and the "press," then and now.

Although the Civil War was fought over state’s rights as much as slavery, Doctorow primarily addressed the effects of slavery and its abolishment on his characters during the march. Why do you think he chose this way of telling the story?

From the shrewd analytical mind of General Sherman, the stoicism of
Wrede Sartorius, the compassion of Emily Thompson, the feistiness of Pearl
and the comic relief of Arly, Doctorow show us the minds of his characters
as they struggle to survive the cruelty of war. Which of these or other
characters in the book do you think you would be most like in a time of
crisis and why?

Throughout "The March," Wrede Sartorius was portrayed as having no
compassion for his patients; rather he treated each of them as a research
subject. Discuss his importance/significance in the book.

3. Cindy Wiser and the As the Page Turns book club
Arly and Will change from Confederate to Union soldiers (and back) and
Pearl changes from black to white (and back) by changing the clothes they
wear and the people with whom they associate. Is it true, as Calvin says,
that "the costume you wear is the person you are"?

At the end of the novel, Pearl and David are no longer slaves, but are
they free? Has Calvin, who has never lived as a slave, ever lived free?
Are any characters free during the war? Colonel Sartorius, Stephen,
Sherman, even Lincoln, live under constraints caused by their situations,
commitments, and responsibilities. What is freedom? What makes us free?

Historians have debated whether Sherman’s march to the sea was simply a particularly brutal act of war or whether it was a war crime. Do you think Sherman’s march was justified? Why or Why not?

How would his was campaign compare with current law of war standards?

The emancipated slaves played many roles in The March. Did Pearl understand her new status? How did she come to realize the difference between freedom and independence?

5. Louise Smith and her book club from Mitchell, SD

Survival is one of the main themes of the novel.  For each character it has a different meaning.  Which have adopted survival mechanisms used to cope?  Describe some of these mechanisms each employs and how these skills help them to survive.

In the opening chapter Pearl prays, "Dear God Jesus…teach me to be free."  To what extent is her prayer granted?

Is Arly, the Southern rebel, simply a wily individual who takes advantage of any opportunity that presents itself or is there more to him than that?  What impact does he have on others and on events?

Learn More About The March
print

The Autobiography of Miss Jane Pittman
Back to Top