The Hand I Fan With Reader’s Guide 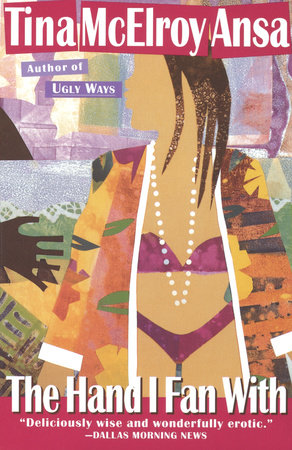 The Hand I Fan With Reader’s Guide

print
The Hand I Fan With Reader’s Guide

Bestselling author Tina McElroy Ansa is back with another tale from Mulberry, Georgia, the richly drawn fictional town and home of the extraordinary Lena McPherson. Lena, now forty-five and tired of being "the hand everyone fans with," has grown weary of shouldering the town’s problems and wants to find a little love and companionship for herself. So she and a friend perform a supernatural ritual to conjure up a man for Lena. She gets one all right: a ghost named Herman who, though dead for one hundred years, is full of life and all man. His love changes Lena’s life forever, satisfying as never before both her physical and spiritual needs. Filled with the same "humor, grace, and great respect for power of the particular" (The New York Times Book Review) as her previous critically acclaimed novels, Baby of the Family and Ugly Ways, The Hand I Fan With is yet another memorable and life-affirming tale from one of America’s best-loved authors.

1. Lena McPherson seems to have it all–the latest car, a thriving business, beautiful clothes, community stature–and so many people who depend on her call her “the hand I fan with.” Yet Lena’s life is strangely empty. What clues to this emptiness does the author give?

2. Although Herman doesn’t “appear” to Lena until Chapter 12, he makes his presence felt much earlier in the book. What did you think of some of Lena’s unusual experiences in the earlier chapters? Did they prepare you for Herman’s arrival?

3. Ansa’s novel is filled with vivid writing about nature–the Cleer Flo’ of the Ocawatchee River, Lena’s extensive property, her horses, etc. How does Lena relate to the beauty around her in the beginning of the novel and by the novel’s end?

4. Certain images abound in the novel, those of food, mules, and water (Cleer Flo’, Lena’s swimming pool, her shower, the goddess Oshun, the storm, etc.). What did the use of these images symbolize for you?

5. The novel also includes many references to music–from old standards to the blues, to pop music of the sixties and seventies, to Salt ‘n’ Pepa. Did the use of music in the book help you to feel the mood of the action? What else did the music convey?

6. What lessons does Herman teach Lena–as a lover, friend, guide? Do you think Lena would have “gotten it” without Herman?

7. Like many women her age, Lena has made her life’s work “doing for others”: the young people in downtown Mulberry, elderly women needing a ride to the store. When Lena has Herman in her life, all that changes. How does the author treat Lena’s transformation and the townsfolk’s reaction? Discuss the place of duty and service in a woman’s life, a black woman’s life, in everyone’s life. Does Lena’s service make her a “saint”?

9. The residents of Mulberry–Cliona from Yamacraw, Chiquita, Gloria, James Petersen–are a colorful group of characters as well as important people in Lena’s life. Do they remind you of people in your own life? Does Lena’s relationship with them echo familiar experiences?

11. Were you surprised when Herman leaves Lena? Had the author left any clues in the book to forewam you? How did you feel when it actually happened? What experiences and revelations does it uncover for you?

12. The novel ends with Lena making a discovery that will change her life. What do you think the author has in mind for Lena?

Learn More About The Hand I Fan With
print

When Love Calls, You Better Answer

Drive Me Crazy
Back to Top