The Birth of Venus Reader’s Guide 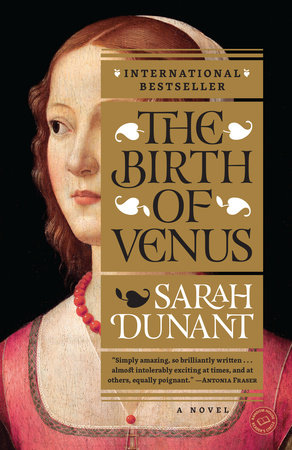 The Birth of Venus Reader’s Guide

1. Alessandra has the will and the talent to paint. She does not have the training or the social opportunity. How far does The Birth of Venus explain why, in the great roll call of artistic geniuses of the Renaissance, there are no names of women?

2. The image of the serpent with a human head is a motif that runs through the novel in many different forms. What are its guises and how does its meaning shift as the novel progresses?

3. Both Alessandra and her mother in their own ways subvert and rebel against the world they are brought up in. Which one of them do you think is the happier or most fulfilled?

4. The only character in the novel who seems to have any real freedom is Erila, yet ironically she is a slave with no rights or apparent power. How is it that she can walk such an independent path when those around her are so trapped?

5. Lorenzo the Great dies early on into the novel, yet his spirit and that of his family, stalk the book both politically and culturally. What image do you get of him and the impact that the De Medici’s had on Florence?

6. Alessandra’s entire world is contained by her belief in God. Yet in the time she is writing there seems to be almost two different kinds of God, depending on whether you are a follower of the renaissance or of Savonarola. How does Alessandra see the difference between the two and how fairly do you think she judges them?

7. How far is Savonarola the villain of the novel?

8. How far is this a novel about a city as much as a character?

9. The novels contains many different kinds of love: intellectual, spiritual, sexual, maternal. Which moves you most and why?

10. Alessandro and her brother Tomaso are at odds with each other form the beginning of the novel. But how far should we trust Alessandra’s judgement of him, given that they are in competition for the same man?

11. How much sympathy do you have for Cristoforo as a character and what kind of portrait of homosexual life in Florence do you get from his thoughts and actions?

12. Alessandra’s marriage, though painful in some ways, is in other ways quite fulfilling, given the confines of the time. At a time when women were seen as so fundamentally inferior, do you think it would have been possible for them to have an equal relationship sexually and intellectually with men?

13. In 15th century there was also no word for depression, only melancholy, and no treatment. How different would suffering depression have been in time when all meaning was seen to stem from God? And why does the painter fall into this trap?

From the Hardcover edition.
Learn More About The Birth of Venus
print

The Passion of Artemisia
Susan Vreeland