To Lie with Lions Reader’s Guide 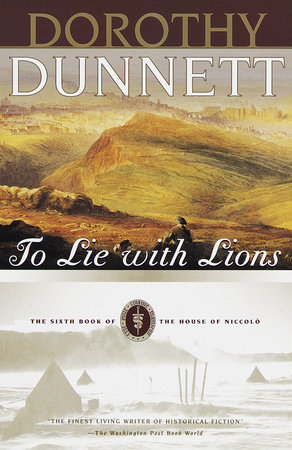 To Lie with Lions Reader’s Guide

The year is 1471. Within the circus of statecraft, where the lions of Burgundy, Cyprus, England, and Venice stalk and snarl, Nicholas wields a valued whip. Having wrested his little son Jordan from his estranged wife, Gelis, he embarks on the greatest business scheme of his life–beginning with a journey to Iceland. But while Nicholas confronts merchant knights, polar bears, and the frozen volcanic wastelands of the North, a greater challenge awaits: the vengeful Gelis, whose secrets threaten to topple all Nicholas has achieved. Here is Dorothy Dunnett at her best. Robustly paced, prodigiously detailed, To Lie with Lions renders the quicksands of Renaissance politics as well as the turnings of the human soul, from love to hate and back.

1. For Discussion: To Lie with Lions

What are Nicholas de Fleury and Katelijne Sersanders to each other, really? What does each offer to, or release in, the other? What do you think the future holds for them?

2. What are the various motives for which his well-wishers persuade Nicholas to throw himself into designing the great Miracle Play at the novel’s center? What are Nicholas’s motives? Can you contrast Jody’s response to the play with Gelis’s eventual response? Why, of all the possible Miracles in the medieval playbook, is the Nativity such an appropriate story for the novel, and for Nicholas?

3. The journeys of Nicholas, since he first left his home in Bruges years ago, have up to this point been to the far East, or the far South. The most memorable and exotic journey in To Lie With Lions is to the far North. How does Dorothy Dunnett exploit the territory of Iceland–its geography, its history, its economics, its symbolic resonance–in the novel?

4. "A good man is as a tree, sheltering those of his blood whom he loves." Nicholas hears this brief allusion to family and future from the great scholar Cardinal Bessarion, and stricken, wishes it were true (ch. 36). Is it not true? Of his sons? Of the older men he believes are also of his blood? How do these shelterings deepen the potential for a tragic outcome under this "tree"?

She has also led a busy life in public service. In the past, she has been a member of the Board of Trustees of the National Library of Scotland, a Trustee of the Scottish National War Memorial, and Director of the Edinburgh Book Festival. She has also served on numerous cultural committees, and is a Fellow of the Royal Society of Arts. In 1992 she was awarded the Office of the British Empire for services to literature. She lives in Scotland and has two sons and one grandson.
Learn More About To Lie with Lions
print

Death of the Fox

Mistress of the Revolution
Back to Top