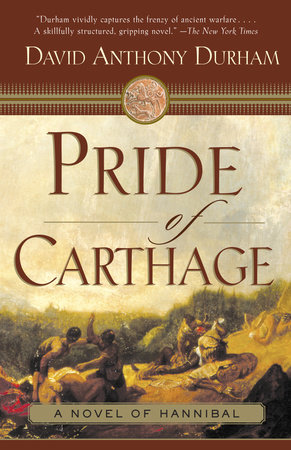 The Carthaginian commander Hannibal Barca stunned the ancient world with his shrewd, relentless, and logic-defying onslaught against the mighty Roman empire. Pride of Carthage captures the legendary Hannibal and his unparalleled military campaign in a novel charged with pulse-quickening action and boldly imagined detail. The introduction, discussion questions, suggestions for further reading, and author biography that follow are intended to enliven your group’s discussion of this evocative epic.

Sickened by Rome’s insatiable appetite for world domination and fueled by his late father’s determination to bring the Italian empire to its knees, Hannibal Barca of Carthage recruits a multinational war machine and initiates one of the most audacious assaults in wartime history. To his soldiers, Hannibal is a strategic genius and a charismatic commander with the power to turn men into conquerors. To the Carthaginian Council, he is a maverick, amok with self-appointed power and in danger of emptying the nation’s coffers with a heedless war. And to the people of Rome, Hannibal is a death-bringer, a mortal with seemingly preternatural powers of destruction.

Meticulously researched and staggering in scope, Pride of Carthage evokes a three-dimensional portrait of the historically elusive Hannibal, conjuring a man of fiery intelligence and exacting authority, whose savagery on the battlefield belies a deep capacity for compassion–and even regret. Tracing Hannibal’s bloody odyssey from Iberia to the gates of Rome, the novel explores not only the visceral brutality of combat, but the subtle nuances of loyalty that sustain the family he leaves behind and the complex motives that drive his most indefatigable soldiers.

1. Hannibal first appears in the novel as a flippant, arrogant, muscle-bound brute who blatantly mocks a delegation from the Roman Senate by making horse-lip noises at them [pp. 11—15]. How does the author go about unveiling the many facets of Hannibal’s personality thereafter, and why does he choose this instance as his starting point? Hannibal is ultimately revealed to be battle-weary, lovesick, demoralized, and peace-seeking; does the author present this shift as a disintegration or as a deepening of character?

2. Imco Vaca stars in the novel as somewhat of an antihero, rewarded for valor after an act of cowardice. Why does his particular tale frame the novel? Imco harbors both a real awe of Hannibal and a sardonic appreciation for the absurdity of the campaign. Which belief prevails in the end? Why does he persevere?

3. The memory of their late father, Hamilcar, looms large in each of the Barca brothers’ psyches. What lessons has each brother learned from him? How do they try to imitate him, and in what ways do they struggle to detach from him? Which man suffered the most contentious relationship with Hamilcar and why? How much of Hannibal’s campaign is an attempt to redress his father’s failures?

4. Didobal urges Imilce to ignore Hannibal’s life outside their home: “I’m not sure if this makes sense to you, but do not seek the ways of war. . . . Do not wish to understand it. Take your husband in his quiet moments, when he’s in your arms and when he looks upon your child with love” [p. 378]. Hannibal recalls Hamilcar offering similar advice: “I did something once that I always regretted afterward. I showed [Didobal] my work. I let her see my bloody masterpiece. . . . I should never have done this” [p. 467]. What incident are they remembering? What point is the author making about the separation of love and war? Is Hamilcar’s statement–”Your mother is a creator; I am a destroyer” [p.468]–hopelessly outdated, or does it have modern relevance? Is a successful relationship possible when one partner’s occupation is so violent and ruthless and seemingly at odds with the values of family life?

5. Tusselo the Numidian, his fate sealed by the cruelty of a single Roman, seeks revenge on the entire Roman empire through Hannibal’s campaign. Does he become loyal to Hannibal along the way, or is his mission entirely personal? Why does Hannibal’s decision to return to Carthage spur Tusselo to his desertion and to his final cathartic act? Has he healed in any way by the end?

6. How does Hannibal’s self-perception contrast with his reputation? Why does he spur his men on to acts of greed and cruelty when he so pointedly despises these traits in the enemy? Does the author paint him as a tragic victim of fate or a self-ruined man?

7. Imilce describes Sophonisba as “well informed and readily capable of discoursing on all manner of subjects. She knows the details of the campaign, and she wishes she might herself take part” [p. 243]. Sophonisba herself states, “I am not like most girls. I do not pray for childish things. I pray that I will somehow serve Carthage in a way that would honor the Barcas” [p. 244]. Is it surprising, then, that Sophonisba so readily chooses suicide when Masinissa, in league with Rome, suggests it? Is her death an act of devastation over losing her mate, or does she believe she is serving Carthage by dying? Why does the author convey her death through the eyes of Masinissa rather than those of her sister and mother?

8. Has Hannibal met his match in Publius? Does the tone of the novel allow the reader to sympathize with the Roman, or is he presented merely as an obstacle to Hannibal’s success? What skills give Publius his edge? Can it be argued that Hannibal is motivated too much by emotion, while Publius is purely rational?

9. As Saguntum falls, Imco Vaca murders an eleven-year-old girl to save her from the life of rape and torture he is certain she will otherwise face. “He prayed that the girl might understand his action as he had meant it: as a twisted, merciful gift” [p. 76]. What are the moral implications of his decision? Are there instances when murder in the name of mercy is justifiable? When the child’s ghost begins to haunt him, why does she mock him as “pitiable,” “a half-man,” “hypocritical,” “a farce” [p. 258], and “pathetic” [p. 261]? How does he rid himself of this apparition? Does he ever forgive himself for killing her?

10. When Hannibal is delivered the severed head of his brother, Hasdrubal, the commander confronts his own crushing sense of guilt: “He did not know where to direct his anger. Rome was the obvious target. He would never say otherwise in his life. But a man has quieter demons to contend with and these spoke more softly than the wraiths. They asked who was truly to blame. From whose hand dripped the most blood? And also they answered: Hannibal’s. Hannibal’s” [p. 460]. In what way does this moment turn the tide in the novel’s action? How does Hannibal choose to interpret the words of his father–”I do, however, question the rightness of the world itself” [p. 468]–as he prepares to lead his men toward Rome?

11. Hannibal’s story concludes with the theme of forgiveness, as he makes his slow, painful progression back to his wife after five long years away. Where else in the novel is the idea of forgiveness examined? Does Sapanibal achieve it? Does Hanno?

12. The relationship between Aradna and Imco is a poignant and sometimes funny subplot within the narrative. Is their love affair meant to be a leavening agent to the heavy mood of the novel, or does it point toward larger themes? Why doesn’t the author reunite the lovers at the end?

David Anthony Durham is the author of two widely praised novels, Gabriel’s Story and Walk Through Darkness. He lives in Massachusetts with his wife and children.

The Far Side of the World
Patrick O’Brian

The Last of the Mohicans
James Fenimore Cooper

Last of the Amazons
Steven Pressfield

Death of the Fox
George Garrett

The Conquest of Gaul
Julius Caesar

The Voyage of the Narwhal
Andrea Barrett

The Last of the Wine
Mary Renault