What Is the What Reader’s Guide 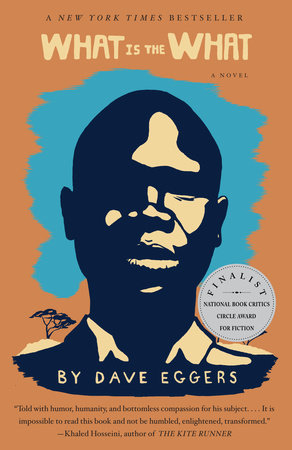 What Is the What Reader’s Guide

print
What Is the What Reader’s Guide

“Told with humor, humanity, and bottomless compassion for his subject. . . . It is impossible to read this book and not be humbled, enlightened, transformed.”
—Khaled Hosseini, author of The Kite Runner

The introduction, discussion questions, suggestions for further reading, and author biography that follow are designed to enhance your group’s discussion of Dave Eggers’s brilliant new novel, What Is the What, which Francine Prose in The New York Times Book Review hailed as “an eloquent testimony to the power of storytelling” and “an extraordinary work of witness, and of art.”

In the preface to What Is the What, Valentino Achak Deng calls the book “the soulful account of my life: from the time I was separated from my family in Marial Bai to the thirteen years I spent in Ethiopian and Kenyan refugee camps, to my encounter with vibrant Western cultures beginning in Atlanta, to the generosity and the challenges that I encountered elsewhere.” The account is soulful, certainly, and also terrifying. It depicts, with arresting immediacy, a world of violence and breathtaking cruelty in which innocent men, women, and children are attacked and killed by militiamen on horseback, bombed by government planes, enslaved by Arab raiders, eaten by lions, driven insane by exhaustion, terror, and disease. It is a book that takes Western readers deep inside the civil war in Sudan and the atrocities it has spawned. And yet, somehow, What Is the What is a book of hope and love as well, an affirmation of the human spirit’s ability to survive and flourish in even the most horrifying of circumstances.

What Is the What tells a powerful and deeply moving story about Valentino’s life, about the Lost Boys and their forced and brutal displacement, and1 about both the indifference and the great compassion he encounters in the United States. But What Is the What is perhaps most deeply about the power of storytelling itself. Valentino feels compelled to tell the world what has happened to him: “Whatever I do, however I find a way to live, I will tell these stories.” To do anything else, he says, “would be something less than human. . . . It gives me strength, almost unbelievable strength, to know that you are there.”

Interweaving stories of what he endured in Africa with his present life in America, Valentino offers a narrative of stunning contrasts and, at times, parallel sufferings. Calamity seems to follow Valentino everywhere, so much that he considers himself cursed. As one of the Lost Boys, he is cut off from his family, hounded out of Sudan, driven nearly to despair by the death of his friends and the constant threat of violence. And in America, though he finds extraordinarily generous sponsors to help him, he is robbed and beaten by thieves and treated with indifference by the police and hospital staff. Unable to get the college education he has dreamed of, he remains stuck in meaningless, dead-end jobs.

But telling his story affirms Valentino’s existence and redeems even the most demeaning humiliations he has had to endure. And knowing that his story is heard, knowing that listeners and readers are out there, gives him strength. It is this connective power of storytelling—its ability to create a shared imaginative experience, its ability to arouse compassion—that makes What Is the What such an unforgettable book.

2. When he is in the United States, Valentino says that he wants everyone to hear his stories. “Written words are rare in small villages like mine, and it is my right and obligation to send my stories into the world, even if silently, even if utterly powerless” [p. 29]. Through Eggers, Valentino has found a way to send his stories into the world. Are they powerless to alter the suffering he and his fellow Sudanese have endured? What powers do they possess?

3. What are Valentino’s most appealing qualities—as a character in his own story and as a narrator of that story?

4. What is the significance of Valentino addressing his stories to people who aren’t listening—to Michael, TV Boy, to Julian, the intake person at the hospital, to members of his gym, etc.? Why would Eggers make this narrative choice?

5. Why is a personal story—Valentino’s story—of the violence and oppression in Sudan more valuable than any purely historical account could be? What emotions does Valentino’s story arouse that a more objective treatment could not?

6. What are Valentino’s most harrowing experiences? In what ways do they shape his character? What enables him to survive these ordeals and even excel in the refugee camps?

7. What is the “what” of the “What Is the What” story? Does the novel point to a solution to this riddle?

8. At the end of the novel, Valentino addresses the reader directly: “All the while I will know that you are there. How can I pretend that you do not exist? It would be almost as impossible as you pretending that I do not exist” [p. 535]. Why would Eggers and Valentino choose to end the novel in this way? In what ways have Westerners pretended that people like Valentino don’t exist? What is Valentino saying here about the power of the imagination and the power of storytelling?

9. In what ways does What Is the What illuminate the genocide that is still ongoing in Sudan?

10. Explore the irony of Valentino escaping from Africa and the terrible violence there to being beaten and robbed in Atlanta. Why does Valentino feel, after he has been victimized—and after his experience with the police and the hospital—that he doesn’t actually exist?

11. Why does Valentino describe America as “a miserable and glorious place”? [p. 351]. How are his struggles in the United States both different from and similar to his struggles in Africa?

12. Valentino says that “the civil war became, to the world at large, too confusing to decipher, a mess of tribal conflicts with no clear heroes and villains” [p. 349]. To what degree is it true that there were no clear heroes and villains, no clear victims and oppressors, in Sudan’s civil war as Valentino describes it? In what ways do SPLA forces behave just as brutally as the murahaleen and government forces they are fighting?

13. When the Lost Boys are chased from a village by the SPLA, Valentino realizes that “there were castes within the displaced. And we occupied the lowest rung on the ladder. We were utterly dispensable to all—to the government, to the murahaleen, to the rebels, to the better-situated refugees” [p. 225]. What essential problem does Valentino’s realization reveal? Is this desire for hierarchy intrinsic to human nature or is it always historically conditioned?

14. What Is the What is about war and displacement and the struggle to survive. In what ways is it also a novel about friendship, love, and family? What moments of compassion stand out in the novel? What are Valentino’s most positive relationships?

Dave Eggers is the author of three previous books, A Heartbreaking Work of Staggering Genius, You Shall Know Our Velocity!, and How We Are Hungry. He is the editor of McSweeney’s, a quarterly magazine and book-publishing company, and is cofounder of 826 Valencia, a network of nonprofit writing and tutoring centers for young people. His interest in oral history led to his 2004 cofounding of Voice of Witness, a nonprofit series of books that use oral history to illuminate human rights crises around the world. As a journalist, his work has appeared in The New Yorker, Esquire, and The Believer. He lives in the San Francisco Bay area with his wife and daughter.

The Travelers
Back to Top