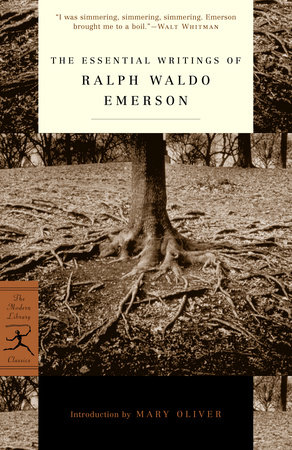 1. Oliver Wendell Holmes called "The American Scholar" "our intellectual Declaration of Independence." How does Emerson’s speech mirror our forefathers’ call for personal liberties? What does intellectual liberty entail and what kind of revolution does Emerson promote? What is his call to arms?

2. How is American history-the history that Emerson was living, witnessing, and documenting-reflected in his observations and concerns? How might Emerson be reacting to the expansion of the American West, industrialization and its effect on both the landscape and rural society, and the rising tensions that would give way to the Civil War?

3. In a biography on Emerson, Robert D. Richardson hailed him as "a prophet of individualism," "an autarchist" (a governor of the self) rather than the anarchist many thought him to be. Emerson said that a man can free himself "only by obedience to his own genius." How is Emerson obedient to his own genius? How do his works reflect his individualism, and how does his message and his writing style break with those of many of his contemporaries?

4. "Why should we not also enjoy an original relation to the universe?" Emerson asks in the first paragraph of "Nature." He seems to advocate a new American style in literature rather than the adoption of European style and thought. How would you define the American style that was developing at the time? How has the definition changed in the years that followed?

5. Many of Emerson’s essays were delivered as speeches or lectures (most notably, "The American Scholar"). How does this influence our reading of them? Based on his impassioned, instructive, and often inspirational bent, what assumptions can you make about Emerson’s audience?

6. Emerson began his career as a minister but later left the church and founded and embraced transcendentalism. To what degree do religion and spirituality inform Emerson’s prose, directly and indirectly, and how does Emerson differentiate the two?

7. Mary Oliver, in her Introduction, speaks of Emerson’s references to both "Nature" and "nature." How does Emerson make this distinction? How would you? Are the two uses almost interchangeable? To which connotation is Emerson referring when he writes of the "American Scholar," "Therein [nature] resembles his own spirit, whose beginning, whose ending, he never can find-so entire, so boundless."?

8. In his journal, Thoreau writes, "there is no such general critic of men and things . . ." Emerson has often been categorized as a critic as much as he is a writer. How does Emerson critique his age-the literature, religion, politics-and what advice does he proffer?

How to Teach Your Children Shakespeare
Ken Ludwig

The Merchant of Venice
William Shakespeare

If Not, Winter
Sappho

Fingerprints of the Gods
Graham Hancock

The Interesting Narrative and Other Writings
Olaudah Equiano

City of God
Augustine of Hippo

Shakespeare After All
Marjorie Garber

On Being Blue
William H. Gass