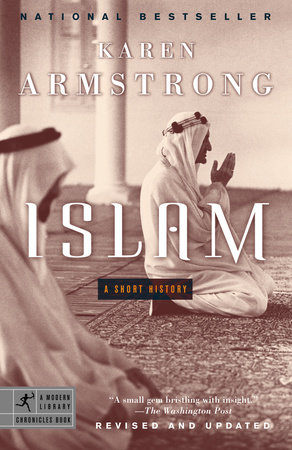 1. In Karen Armstrong’s view, what is the historical mission of Islam? What is the chief duty of Muslims according to the Quran? What is the Islamic notion of salvation?

2. What are the five pillars of Islam? Does Islam place more emphasis on right living or right belief? The community or the individual? In these ways, is it more similar to Christianity or Judaism?

3. At the time of Muhammed, what was the attitude of Islam toward other prophets and religious traditions? How were non-Muslim subjects, or dhimmi, treated in the Islamic empire? How does that treatment compare to what went on in the premodern West?

4. Is Islam a militaristic faith? What does the Quran have to say about just and unjust wars? Given the context of his times, did Muhammed set a particularly violent or nonviolent example?

5. What does the Quran teach about the importance of converting people of other faiths? Does Islam condone coerced conversion? How does its theological stance on conversion compare to the teachings and practices of the other major world religions?

6. What does the Quran have to say about the place of women? How forward or backward-thinking was Muhammed’s treatment of women for his time? What accounts for the persistence of a practice such as female veiling in the modern-day Muslim world?

7. What are the differences between Sunni and Shii Muslims? What were the origins of this split within Islam? Did it have theological underpinnings or was it merely politically motivated?

8. What is the primary meaning of the word jihad? Explain its significance in Islam. How did Muhammed understand it? How do some modern-day fundamentalists understand it?

10. What have been some of the successes and failures of modern-day Islamic nation building? What particular challenges do postcolonial Islamic states face? What has been a common problem with the way secularism has been imposed in the Muslim world?

11. What are some of the greatest challenges facing the Islamic faith today?

12. What are the most common misperceptions about Islam and the Muslim world in the West?

Learn More About Islam
print
Back to Top