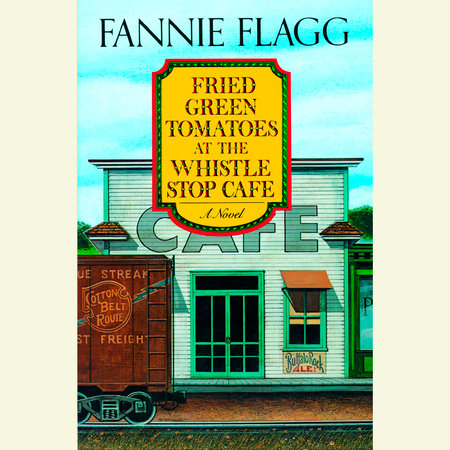 Folksy and fresh, endearing and affecting, Fried Green Tomatoes at the Whistle Stop Cafe is the now-classic novel of two women in the 1980s; of gray-headed Mrs. Threadgoode telling her life story to Evelyn, who is in the sad slump of middle age. The tale she tells is also of two women–of the irrepressibly daredevilish tomboy Idgie and her friend Ruth–who back in the thirties ran a little place in Whistle Stop, Alabama, a Southern kind of Cafe Wobegon offering good barbecue and good coffee and all kinds of love and laughter, even an occasional murder. And as the past unfolds, the present–for Evelyn and for us–will never be quite the same again…

“Airplanes and television have removed the Threadgoodes from the Southern scene. Happily for us, Fannie Flagg has preserved a whole community of them in a richly comic, poignant narrative that records the exuberance of their lives, the sadness of their departure. Idgie Threadgoode is a true original: Huckleberry Finn would have tried to marry her!”
–Harper Lee, Author of To Kill a Mockingbird

“A real novel and a good one… [from] the busy brain of a born storyteller.”
—The New York Times

1. This novel has a very complex structure alternating between the past and the present and the point of view of a whole host of different characters. Did this narrative format work for you? Were there particular narrators you found more compelling than others and why?

2. ?Idgie and Ruth’s friendship is truly a case of opposites attract. Why is the scene where Idgie reveals her bee charming skills to Ruth so pivotal to the story of their relationship and in understanding what drew them together despite their differences?

3. Jasper Peavey’s grandson is embarrassed by his grandfather’s behavior toward white people. Discuss generational conflict and how life changed or did not change across the generations in both the Peavey and Threadgoode families.

4. This novel has a great deal to say about race relations in the South. How did the black and white communities interact in this story both within and beyond the borders of Whistle Stop? Were Idgie and Ruth’s egalitarian views on race typical?

5. ?What is Artis Peavey’s secret? Do you think the events he witnessed as a child had an impact upon his later life? How does race have an impact upon the lives of all the Peavey children–Jasper, Artis, Willie Boy, Naughty Bird? What options were available to them and what choices did they make and why? What do you think of the revenge that Artis takes on the man who murdered his brother?

7. How do you feel about a character like Grady Kilgore, Whistle Stop sheriff, member of the Ku Klux Klan, and friend to Idgie and Ruth at the same time?

8. ?Eva Bates is a woman you might call sexually liberated before her time. What role does she play in Idgie’s life? In Stump’s? What are Ruth’s feelings toward Eva?

9. We never learn where Ninny came from or how she came to be adopted by the Threadgoodes, only that they took her in and treated her like a member of the family. This is only one example in a novel full of non-traditional families. What are some other examples of familial bonds that do not look like a traditional nuclear family? How does this author challenge and expand our understanding of the meaning and structure of family?

10. ?What drives Idgie to masquerade as Railroad Bill? What role did the economic devastation of the Great Depression play in the lives of Idgie, Ruth, Smokey, and everyone in Whistle Stop?

11. ?Why did Ruth leave Idgie and marry Frank? What made her finally leave him?

12. ?Did the identity of Frank Bennett’s killer surprise you? What drove her to do what she did? Why was Idgie prepared to take the blame?

13. What do Dot Weems’ weekly dispatches tell us about the nature of life in a small town? Were you sorry to see Whistle Stop fade away? Why has this been the fate of so many small towns in America?

14. How does Idgie help Stump overcome having lost his arm?

15. ?How did Evelyn’s relationship with Ninny Threadgoode change her life? What did she learn from Mrs. Threadgoode? And how did Evelyn help her friend?

16. What did Ninny Threadgoode’s stories offer Evelyn? Why do you think Evelyn is so drawn to this woman and her stories?

17. Ninny tells Evelyn that her memories are all she has left. Discuss the importance of memory and storytelling in this novel.

18. Why and how was Evelyn able to finally overcome her revenge fantasies, send Towanda packing and make important changes in her life? What steps did she take that ensured these changes would be for good and not a temporary thing?

19. How does this story explore the process of aging? How do we die with dignity when all those we loved and who loved us are gone? How does Ninny manage?

21. Is domestic violence viewed differently today than it was in Ruth’s time? Do you see any changes in Ruth’s character after she leaves her abusive marriage?

22. Which character would you be most interested in meeting and why?

23. For those of you who have seen the movie, how do the movie and the book compare? What is missing from the movie and why do you think this is so? Do you think the choices made in terms of how to streamline this complex novel for film were the best ones?

24. The importance of food in the fabric of everyday life is a central theme in this book. For example, Evelyn and Mrs. Threadgoode bond over the treats Evelyn brings. What does Evelyn’s battle with her weight say about contemporary society and women’s relationships with food and their weight? Are these struggles evident in the lives if Ninny, Idgie, or Ruth?

25. In the final chapter, we learn what has happened to Idgie. Why do you think she and Julian left Whistle Stop to take to the road? Why don’t their friends or family appear to know where they are? Does this seem like an appropriate ending for Idgie?

26. ?Will anyone or has anyone tried any of Sipsey’s recipes?

Fannie Flagg began writing and producing television specials at age nineteen and went on to distinguish herself as an actress and a writer in television, films, and the theater. Her first novel, Daisy Fay and The Miracle Man, spent ten weeks on the New York Times paperback bestseller list, and her second novel, Fried Green Tomatoes at the Whistle Stop Cafe, was on the same list for thirty-six weeks. It was produced by Universal Pictures as the feature film Fried Green Tomatoes. Flagg’s script was nominated for both the Writers Guild of America and an Academy Award, and it won the highly regarded Scripters Award. Flagg narrated both novels on audiocassette and received a Grammy Award nomination for Best Spoken Word. Her latest novel is titled Welcome to the World, Baby Girl! She lives in California and Alabama.
Learn More About Fried Green Tomatoes at the Whistle Stop Cafe
print

Standing in the Rainbow
Back to Top