Kill and Be Killed Reader’s Guide 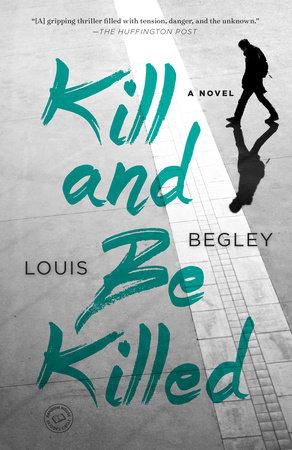 Kill and Be Killed Reader’s Guide

There are many reasons why novelists are not content to leave a novel they have finished alone and, instead, write one or more sequels. Sometimes the reason is that the subject matter is too vast to be contained in one tome. Marcel Proust’s In Search of Lost Time is such a case. More often, the novelist becomes so attached to one or more characters in his novel that he doesn’t want to take leave of them. Writing a sequel, in which some of those characters reappear, makes it possible to go on living in their company. Anthony Trollope’s Barchester and Palliser novels illustrate this point. Trollope didn’t want to let go of the admirable and lovable Mr. Septimus Harding and his daughters, or Archdeacon Grantly, or Bishop Proudie and his terrible wife. Or, when his focus moved from Barchester to London, his other splendid creations: Phineas Finn, Lady Glencora Palliser, Madame Max, the Duke of Omnium, Plantagenet Palliser. He returned to them in volume after volume. Crime novels and thrillers offer abundant examples of the creator of a great detective, charming criminal, or avenger allowing him to continue his work. Sherlock Holmes, Hercule Poirot, Sam Spade, Commissaire Maigret, Arsène Lupin, and Jack Reacher come immediately to mind. In my own novels, there has been Albert Schmidt, Esq., the retired lawyer known to his friends as Schmidtie. I became so fond of him, of Carrie and Alice, the women he has loved, and his friends Gil Blackman and Mike Mansour, that I came back to him three times, in About Schmidt, Schmidt Delivered, and Schmidt Steps Back. Occasionally, I dream of revisiting him one more time.
And then there is my new friend, Jack Dana, the heroic former Marine Corps Infantry captain and Force Recon platoon leader, who becomes a successful novelist after injuries sustained in Afghanistan preclude his continuing in active service. He finds himself locked in a life-and-death struggle with Abner Brown, a quintessentially evil extreme right-wing billionaire, who stands at the head of twin fortunes, one of which is legitimate, and the other a vast criminal enterprise engaged in drug trade, human trafficking, an evasion of North Korea and Iran sanctions, and money laundering. In the first Jack Dana novel, Killer, Come Hither, Jack discovers that the apparent suicide of his beloved uncle Harry, who is found hanged in his Sag Harbor weekend house, was in fact murder committed by a hitman sent by Abner. Harry, a leading New York City lawyer, was Abner’s principal legal counsel and came upon evidence of his crimes in the course of preparing the public offering of one of Abner’s top holding companies. He confronted Abner, and Abner’s riposte was to have him killed, lest he turn the evidence over to the authorities.
Jack’s helper in Killer, Come Hither is Kerry, Harry’s protégée and favorite young partner. He and Kerry fall deeply in love, but Kerry is ultimately revolted by the way Jack kills the hitman who murdered his uncle. She thinks Jack crossed the line that separates justifiable homicide committed in self-defense from murder. She tells him she smells blood on his hands and throws him over. Disconsolate, Jack retreats to Torcello, an island in the Venetian Lagoon, to try to forget Kerry and concentrate on writing his new book.
I could have left Jack there and turned to other matters. But I really didn’t want to. I had enjoyed writing Killer, Come Hither and found I didn’t want to lose touch with Jack or, for that matter, with Abner, who had turned out to be a grimly satisfactory villain. There was only one way out—I had to write a sequel. That sequel is Kill and Be Killed, and, I may as well admit it: I had an even better time writing it. Killer, Come Hither had at its origin my own deep-rooted fear of intruders and violence, thus the murder of elderly, honorable Harry by a brutal criminal who invades his house, and also in my hope that there are some young Americans of a background as privileged as Jack’s who decided to get into the fight after 9/11, not because they thought invading Afghanistan or Iraq was a good idea or because they fell for George W. Bush’s warmongering rhetoric, but because they thought it was their duty. They would stand up for their country, whether it was right or wrong. Kill and Be Killed has identifiable roots, too: my desire to have Jack confront Abner and discover what lies in that heart of darkness, my preoccupation, which Jack shares, with the corruption rampant in our society, made evident by the influence of the money that floods our political system, and our coarse indifference to the suffering of some of those who most deserve our compassion: returning veterans, the long-term unemployed, segments of our population stuck in stubborn, ingrained poverty. Finally, I wanted to explore the gulf of misunderstanding that separated Jack and Kerry that results in his failure to recognize her vulnerabilities. Those vulnerabilities, and the vortex of self-destructive behavior into which she is dragged by them, prevent her from calling out to Jack for help when Abner decides it is her turn to be eliminated. Like Harry, she knows too much. Ignorant of Damocles’ sword hanging over her head, Jack is unable to save her. But he will avenge her.
As I followed the ensuing struggle I gave Jack a new teammate determined to do her share in bringing Abner to account. She is Heidi, Kerry’s best friend and another superbright lawyer. Unflinchingly courageous, she is also irresistibly beautiful, elegant, and clever. I consider her one of my finer creations and am happy to know she is at Jack’s side.

1. In this chapter of the Jack Dana series, Jack allows the justice system to take its course when dealing with Abner Brown. Compare and contrast the outcomes of Jack’s behavior in this novel with what happened when Jack took justice into his own hands in Killer, Come Hither.

2. Kerry and Jack’s relationship ended primarily because of their starkly different views of justice. Does Kerry’s death make you reconsider their respective positions on the issue?

3. Did you believe, at any point, that Kerry’s death was actually a suicide, or did you share Heidi and Jack’s conviction of foul play throughout?

4. Do you think that being with Jack kept Kerry away from doing drugs and that she started doing them after their breakup, or do you think she kept it a secret from Jack while they were dating?

5. With Kerry’s death, Jack realizes how much he didn’t know about her. Do you think it’s possible to love someone to that extent without knowing him or her?

6. If Jack had known that Kerry would leave him if he killed Slobo, do you think he would’ve gone ahead with it? Would Kerry still be alive if he hadn’t?

7. Do you agree with Jack’s vague suspicions that Heidi and Kerry were romantically involved, or do you think that they were just close friends?

8. Kerry, Jeanette, and Heidi all get attacked as a result of their relationships with Jack in some way. Does Jack bear any responsibility for these attacks? Do you think he could’ve done more to protect them?

9. Throughout the novel, Jack refuses the protections offered by Scott, Martin, and Feng, knowing that Abner is trying to kill him. What do you make of his behavior? Do you think that he’s trying to tempt fate? Do you perceive this behavior as arrogant?

10. Eric greets Jack with warmth and enthusiasm at The Rat. Were you surprised by the encounter between Jack and Eric in the park at the end of the novel?

11. At the end of the novel, Abner has killed himself and his legacy is tainted. Is this morally satisfying, or would you have preferred a different outcome?

12. What do you make of Heidi and Jack’s relationship? Do you believe it will continue to be platonic? If they are eventually to be together, is this disrespectful to Kerry?

Learn More About Kill and Be Killed
print

Last of the Dixie Heroes
Back to Top