The Book of Form and Emptiness Reader’s Guide 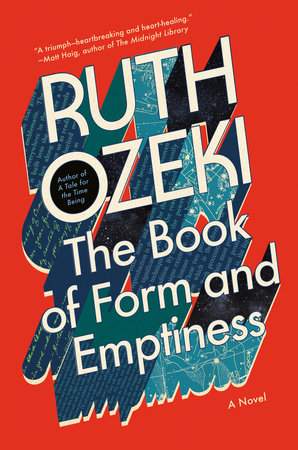 The Book of Form and Emptiness Reader’s Guide

print
The Book of Form and Emptiness Reader’s Guide

A luminous, inventive novel about loss, growing up, and our relationship with things, by the Booker Prize-finalist author of A Tale for the Time Being

After the tragic death of his beloved musician father, Kenji, fourteen-year-old Benny Oh begins to hear voices. The voices belong to the things in his house—a sneaker, a broken Christmas ornament, a piece of wilted lettuce. Although Benny doesn’t understand what these things are saying, he can sense their emotional tone; some are pleasant, a gentle hum or coo, but others are snide, angry, and full of pain. Though he tries to ignore them, the voices grow steadily more clamorous and intrusive, and Benny finds himself doing everything he can to block them out.
While Benny struggles with the cacophony of clutter, his mother, Annabelle, feels sentimentally attached to even the smallest and most seemingly insignificant objects, and can’t seem to throw anything away that might tether her to her old life with Kenji and a younger, more hopeful version of herself. When her office closes and she is forced to work from home, a growing tidal wave of work-related paraphernalia and personal possessions accumulates in their apartment, threatening to drown them both—and, if their landlord’s meddling son has his way, get them evicted.

Soon the voices begin to follow Benny outside the house, onto the street and at school, driving him at last to seek refuge in the silence of a large public library, where objects are well-behaved and know to speak in whispers. There, Benny discovers a strange new world, a world where “things happen.” He falls in love with a mesmerizing street artist with a smug pet ferret, who uses the library as her performance space. He meets a homeless philosopher-poet, who encourages him to ask important questions about what is “real” and find his own voice among the many.

And he meets his very own Book—the preeminent and most profound talking thing—who narrates Benny’s life and teaches him to listen to the things that truly matter. Though Benny’s relationship with his own story is often contentious, the Book also guides him toward a sense of agency in his own life, which may be the secret to unlocking the brighter, freer future that he and Annabelle are so desperately seeking.

A vibrant story with memorable characters that engages with everything from jazz, to climate change, to our attachment to material possessions, The Book of Form and Emptiness is classic Ruth Ozeki—wise, playful, humane, and wildly imaginative, a book that invites readers think more deeply about their own lives and stories.

1. The Book of Form and Emptiness is, in many ways, the coming-of-age story of a boy grappling with his own mind, his own creativity, and his own perplexing experiences, at a moment of profound loss. The Book is narrating Benny’s life, and sometimes Benny intervenes to challenge or correct or complain. What do you make of the relationship between Benny and his Book? Do you think the Book is creating Benny, or is Benny creating the Book? Which came first, the chicken or the egg?

2. The Book of Form and Emptiness is also a book about books. Excerpts from “Unpacking My Library,” an essay about readers’ relationship to their books by the German philosopher Walter Benjamin, appear throughout. Did Benjamin’s ideas about books resonate with you as a reader? What is your relationship to books and how have they shaped your life? How do you think hearing the Bottleman’s account of Benjamin’s life and death affected Benny?

3. Research has shown that between 4-10 percent of the population has at least occasionally had some kind of experience hearing voices, and many people who hear voices regularly find them to be a source of inspiration rather than a symptom or problem they would like to get rid of. And even people like Benny, who start to hear voices after some kind of traumatic experience—like the death of someone close to them—find that their voices, if properly understood, can offer insights into their experiences.  Has reading about Benny’s voice-hearing experiences changed the way you view the mind? The imagination? Madness? Creativity?

4. Benny distinguishes between the voices of Made and Unmade things, manufactured objects and objects that occur in nature. Over time, the Book explains, “the Made proliferated, relegating the Unmade to the status of mere resource, a lowly serf class to be colonized, exploited and fashioned into something else, some thing that was more to your liking” (p. 71). How do you experience the divide between Made and Unmade things? Do you agree with the book’s characterization of the proliferation of Made things as a negative side effect of human progress?

5. Crows appear throughout the book. Some characters, like “No-Good,” view them as a dirty nuisance, whereas for other characters, such as Annabelle, they are guardian angels of sorts. Aikon describes the crow at the temple as “a bodhisattva, who had taken pity on [her]…The bodhisattva had taken the form of a crow in order to help [her] wake up to the vast, boundless Emptiness of all things.” What do you make of the crow motif? Were there other motifs in the novel that stuck out to you as particularly significant?

6. The Library is a very important place for Benny and for the wider community, a place where people go to both find and lose themselves, and where objects both behave themselves and come to life. What are the components that make an ideal library? How do Benny’s experiences in the library—particularly in the Bindery—alter the course of his life?

7. In the prologue to Tidy Magic, Aikon writes, “before you know it, your belongings have gotten the upper hand again, and your possessions have you in their thrall. If this describes you, please know that I understand. I used to have this same relationship with my things. I didn’t possess them, they possessed me.” What kind of relationship do you have with your possessions? Do you ever feel that you don’t have as much control over them as you would like to? Do you relate to Annabelle’s struggle to let go of objects? What do you think “gives things the power to enchant”?

8. When Benny is shunned at school, it is because the other students have made Benny and his family “their ostracized Other, against whose strangeness they could define their collective normality.” Think about times in which you’ve been on either side of this divide. How does Benny’s experience at school relate to his philosophical question about what is “real”? How do we define what is normal and what is not?

9. Many of Benny’s friends from Pedipsy and the Library live at the margins of society—characters such as the Bottleman, who may appear to strangers as a “crazy old hobo,” even though those who know him understand that he’s a poet, philosopher, and teacher. The Aleph explains to Benny that “it’s not him that’s crazy” but “the . . . world we live in. It’s capitalism that’s crazy. It’s neoliberalism, and materialism . . . [and the] meritocracy that tells you that feeling sad is wrong and it’s your fault if you’re broken.” Do you agree with her? How do we decide who and what to dismiss as “crazy”?

10. Aikon writes about her teacher’s idea that everything is “already broken.” “Knowing this, we can appreciate each thing as it is, and love each other as we are—completely, unconditionally, without expectation or disappointment.”What do you think of this idea? What does it have to do with the seemingly paradoxical idea she contemplates that everyone is already perfect, just as they are, but it is equally true that everyone could use a little improvement? How can both things be true, and how does this concept play out in the lives of the characters in the novel?

11. From time to time, when bad or confusing things happen to him, Benny becomes frightened or angry with the Book, blaming the Book for not warning him or not telling a “better” story. Then, toward the end of the novel, the Book tells him that “blame is just another way of refusing to take responsibility for your life, and when you blame us, you give up your own power and agency.” This is a turning point for Benny. How did you respond? Do you think people believe they have more agency and control over their lives than they really do, or less? Is there a freedom to be found in either perspective? Did this novel influence the way you think about your own agency?

12. At the end of the novel, the Bottleman quotes the words of the Canadian First Nations writer, Thomas King: “The truth about stories is that’s all we are.” The B-man goes on to elaborate, saying, “We are ze stories we tell ourselves, Benny-boy. We meck ourselves up. We meck each other up, too.” What does this mean to you? What are some of the stories you tell yourself about yourself? About others?

13. If you have read Ozeki’s other novels, would you connect any of the characters from those books to the characters in this one? What themes do you notice running through her work?

Ruth Ozeki is a novelist, filmmaker, and Zen Buddhist priest. She is the best-selling author of four novels: The Book of Form and Emptiness, winner of the UK’s 2022 Women’s Prize for Fiction; My Year of Meats; All Over Creation; and A Tale for the Time Being, which won the LA Times Book Prize and was a finalist for the 2013 Booker Prize and the National Book Critics’ Circle Award. Her nonfiction work includes a memoir, The Face: A Time Code, and the documentary film, Halving the Bones. A longtime Buddhist practitioner, Ruth is affiliated with the Brooklyn Zen Center and the Everyday Zen Foun­dation. She is the Grace Jarcho Ross 1933 Professor of Humanities at Smith College.
Learn More About The Book of Form and Emptiness
print

Hell of a Book

The Dangers of Smoking in Bed

The Death of Vivek Oji
Back to Top