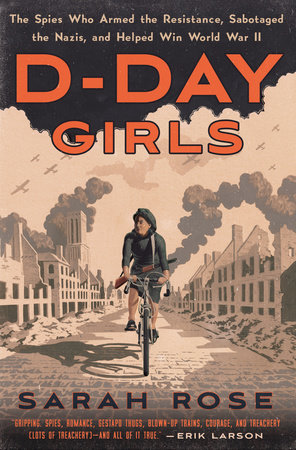 1.     The author opens the book with dialogue from Shakespeare’s Henry VI. How did you interpret this quote prior to reading D-Day Girls? After finishing the book, did your interpretation of this quote change?

2.     Is there a person mentioned in D-Day Girls whom you relate to most strongly? Why?

3.     Initially some leaders of the Special Operations Executive took issue with the fact that Odette was born in France. She was “suspect by virtue of her birth” (page 10). Why do you think the SOE still ultimately sent her to war? Where do you see this kind of suspicious sentiment toward those we perceive as “others” in our world today?

4.     The adult women of the Special Operations Executive were frequently referred to in spoken and written communication as “girls.” The author points out that although it may sound “uncomfortable to the modern ear” (page 301), this was common language for the time. Are you uncomfortable with the usage of the word “girls”? Why or why not?

5.     Why do you think that the author chose to focus most closely on Odette, Lise, and Andrée?

6.     According to the author, after going off to war “the Corps Féminins were never just on the job; they retained an identity as mothers, sisters, girlfriends, wives—or ex-wives—even behind enemy lines” (page 83). Is this ability to retain civilian identities even while at war an asset?

7.     Do you feel that the Special Operations Executive, FANY, and other similar organizations that gave women a hands-on role in WWII were progressive for their time? Why or why not?

8.     During the war, the French developed a new word—dépaysement—for their wartime sense of “not feeling at home” (page 136). Have you ever felt dépaysement in your life? In our modern world, does this word resonate?

9.     The war stories of these female spies were kept under wraps as classified information until very recently. What was the purpose of this? Why do you feel that World War II history has largely hidden the roles women took on in the war?

10.  What do you think is gained in our understanding of the war and the world in general by discussing the untold narratives of women such as Lise, Odette, and Andrée?
Learn More About D-Day Girls
print

To Wake the Giant
Jeff Shaara

Murder by the Book
Claire Harman

The Red Daughter
John Burnham Schwartz
Back to Top