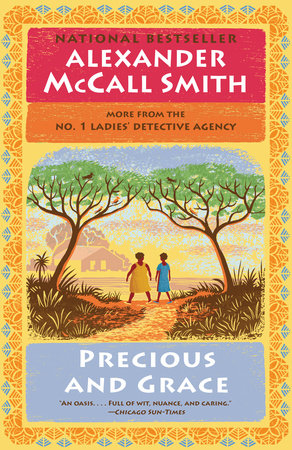 The questions, discussion topics, and reading list that follow are intended to enhance your reading group’s discussion of Precious and Grace by Alexander McCall Smith. In this latest installment of the beloved and best-selling No. 1 Ladies’ Detective Agency series, Precious Ramotswe and Grace Makutsi help a young woman on a quest to find someone from her past.

In this latest installment of the beloved and best-selling No. 1 Ladies’ Detective Agency series, Precious Ramotswe and Grace Makutsi help a young woman on a quest to find someone from her past.

Changes are afoot at the No. 1 Ladies’ Detective Agency, where Mma Makutsi, who has recently been promoted to co-director, has been encouraging Mma Ramotswe to update to more modern office practices. However, an unusual case will require both of them to turn their attention firmly to the past. A young Canadian woman who spent her early childhood in Botswana requests the agency’s help in recovering important pieces of her life there. With only a faded photograph—and, of course, some good old-fashioned detective skills—to guide them, Precious and Grace set out to locate the house that the woman used to live in and the caretaker who looked after her many years ago. But when the journey takes an unexpected turn, they are forced to consider whether some lost things may be better off unfound.

Busy as she is with this challenging investigation, Mma Ramotswe can always be relied on to come to the aid of her friends—who seem to have a special knack for landing in hot water. Mr. Polopetsi, an occasional assistant at the agency, has made an ill-advised business decision that may lead to serious trouble. And next door at Tlokweng Road Speedy Motors, Fanwell, the junior mechanic, has become helplessly attached to a stray dog who proves to be a bigger responsibility than he can handle. With Mma Makutsi by her side, Mma Ramotswe dispenses help and sympathy with the graciousness and warmth for which she is so well-known, and everyone is led to surprising insights into the healing power of compassion, forgiveness, and new beginnings.

2. Describe Mma Ramotswe’s relationship with other people in the novel. How is it similar or different to her friendship with Grace?

3. This title is different from the titles of other No. 1 Ladies’ Detective Agency series in length and tone. How is it different and why?

4. Why do you think the author starts off the novel with Mma Makutsi telling some white lies about the detective agency? Why doesn’t Mma Ramotswe reprimand or correct her despite feeling uncomfortable hearing them? What would you have done if you were Mma Ramotswe?

5. How does this tie into Mma Makutsi herself later in the novel criticizing liars and saying, “The country must be full of liars” (p. 98)?

7. Describe the unusual case of Susan Peters. How would you have gone about finding her former nanny? How do you feel about the way the case was resolved? What is the lesson Mma Ramotswe shares at the close of the case?

8. Why does Mma Ramotswe enjoy reminiscing and talking about the past and how it was “the time of cattle; the time of bicycles rather than cars; the time when the arrival of the day’s single plane was an event; the time of politeness and courtesy.” (p. 33)? How do these reminiscences fit in with the themes of the No. 1 Ladies’ Detective Agency series?

9. Do you agree with the advice of Clovis Anderson, “Be very careful of anything that looks too good to be true. Because if it looks too good to be true, that’s probably because that’s exactly what it is!” (p. 58)? Do you have any examples of this from your own life? What is the importance of Clovis Anderson for Mma Ramotswe? Why does she like and respect him so much?

10. Another theme of this novel is that of seeing the world from another’s perspective. “Tall people could forget that the world might look quite different if you were short; and of course well-off people had a marked tendency to forget how things might look if you were poor. We have to remind ourselves, she thought. We have to remind ourselves how the world looked when viewed from elsewhere” (p. 64). Discuss this theme in terms of the book and the entire series.

11. In concert with seeing from another’s perspective is accepting people who see things differently than you: “Once you understood that, then you could accept the people themselves as they were and not try to change them. What was even more important, perhaps, was that you could love those people who looked at things so differently, because you realized that they were not trying to make life hard for you by being what they were, but were simply doing their best” (p. 90). How do these thoughts Mma Ramotswe is contemplating connect with Charlie and with the events in the book? How does it help her solve Susan’s case?

12. What is the issue with Mr. Polopetsi in this novel? How does it get resolved?

13. “Nothing was cheap, she thought, even the things that were said to be free. Love itself was not cheap . . . Freedom was not cheap—its price tag was watchfulness and courage. Even fresh air, the air we breathed each day, had its price tag, it seemed” (p. 78). Discuss this quote and talk about whether or not you agree with it. How does it relate to Mr. J.L.B. Matekoni and Mma Ramotswe? How does it relate to your life?

14. What do you think of the Bishop’s sermon on forgiveness and retribution? What is his message? What does he mean by saying “when we punish somebody, we are often just punishing ourselves” (p. 212)?

15. Comment on Mma Ramotswe’s thoughts on forgiveness at the end of the book, “Anger, and its close cousin revenge, had come off second best to forgiveness and to the realization that current unhappiness is not always helped by delving into the past, but can be dealt with by other, more productive means” (p. 226).

16. What have you learned, gained or taken away from reading this book? What do you think Alexander McCall Smith wants to share by writing these books? What would you want to share and write about if you wrote a book?

ALEXANDER McCALL SMITH is the author of the No. 1 Ladies’ Detective Agency series, the Isabel Dalhousie series, the 44 Scotland Street series, the Portuguese Irregular Verb series, and the Corduroy Mansions series. He is professor emeritus of medical law at the University of Edinburgh and has served on many international organizations concerned with bioethics. He was born in what is now known as Zimbabwe, and taught law at the University of Botswana. He lives in Scotland with his wife and plays the bassoon in the Really Terrible Orchestra.
Learn More About Precious and Grace
print

The House of Unexpected Sisters

The Geometry of Holding Hands

The Uncommon Appeal of Clouds
Back to Top