Hotel on the Corner of Bitter and Sweet Reader’s Guide 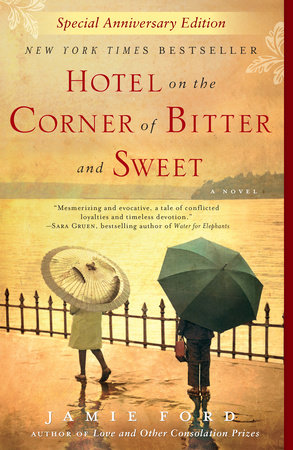 Hotel on the Corner of Bitter and Sweet Reader’s Guide

2. Why doesn’t Henry’s father want him to speak Cantonese at home? How does this square with his desire to send Henry back to China for school? Isn’t he sending his son a mixed message?

3. If you were Henry, would you be able to forgive your father? Does Henry’s father deserve forgiveness?

4. From the beginning of the novel, Henry wears the “I am Chinese” button given to him by his father. What is the significance of this button and its message, and how does Henry’s understanding of that message change by the end of the novel?

5. Why does Henry provide an inaccurate translation when he serves as the go-between in the business negotiations between his father and Mr. Preston? Is he wrong to betray his father’s trust in this way?

6. The United States has been called a nation of immigrants. In what ways do the families of Keiko and Henry illustrate different aspects of the American immigrant experience?

7. What is the bond between Henry and Sheldon, and how is it strengthened by jazz music?

8. If a novel could have a soundtrack, this one would be jazz. What is it about this indigenous form of American music that makes it an especially appropriate choice?

9. Henry’s mother comes from a culture in which wives are subservient to their husbands. Given this background, do you think she could have done more to help Henry in his struggles against his father? Is her loyalty to her husband a betrayal of her son?

11. What struggles did your own ancestors have as immigrants to America, and to what extent did they incorporate aspects of their cultural heritage into their new identities as Americans?

12. Does Henry give up on Keiko too easily? What else could he have done to find her?

13. What about Keiko? Why didn’t she make more of an effort to see Henry once she was released from the camp?

14. Do you think Ethel might have known what was happening with Henry’s letters?

15. The novel ends with Henry and Keiko meeting again after more than forty years. Jump ahead a year and imagine what has happened to them in that time. Is there any evidence in the novel for this outcome?

16. What sacrifices do the characters make in pursuit of their dreams for themselves and for others? Do you think any characters sacrifice too much, or for the wrong reasons? Consider the sacrifices Mr. Okabe makes, for example, and those of Mr. Lee. Both fathers are acting for the sake of their children, yet the results are quite different. Why?

17. Was the U.S. government right or wrong to “relocate” Japanese Americans and other citizens and residents who had emigrated from countries the U.S. was fighting in WWII? Was some kind of action necessary following Pearl Harbor? Could the government have done more to safeguard civil rights while protecting national security?

18. Should the men and women of Japanese ancestry who were rounded up by the U.S. government during the war have protested more actively against the loss of their property and liberty? Remember that most were eager to demonstrate their loyalty to the United States. What would you have done in their place? What’s to prevent something like this from ever happening again?