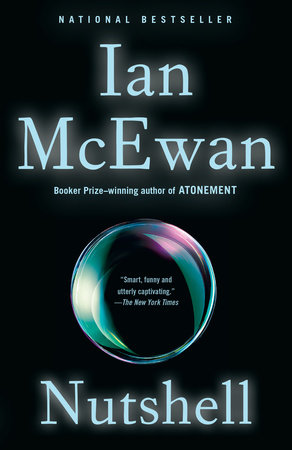 This guide is designed to enhance your group’s discussion of Nutshell, the brilliant new novel from Ian McEwan.

“Oh God, I could be bounded in a nutshell and count myself king of infinite space—were it not that I have bad dreams.” —Hamlet, Act II, Scene 2

Trudy has been unfaithful to her husband, John. What’s more, she has kicked him out of their marital home, a valuable old London town house, and in his place is his own brother, the profoundly banal Claude. The illicit couple have hatched a scheme to rid themselves of her inconvenient husband forever. But there is a witness to their plot: the inquisitive, nine-month-old resident of Trudy’s womb.

As Trudy’s unborn son listens, bound within her body, to his mother and his uncle’s murderous plans, he gives us a truly new perspective on our world, seen from the confines of his. McEwan’s brilliant recasting of Shakespeare lends new weight to the age-old question of Hamlet’s hesitation, and is a tour de force of storytelling.

1. There are many allusions and references in the novel to Shakespeare, Hamlet in particular. Cite them all. Which resonated with you the most?

2. It’s not easy to empathize with Trudy. But give it a try. Discuss her character, her dilemma, and the ways in which you identify with her.

3. At one critical point John gives a soliloquy, the story of his love affair and marriage with Trudy. How surprising was that to you? What does it say about romantic love? Did you feel differently about John and Trudy after reading this?

4. Does Claude have any redeeming qualities? If so, what are they?

5. There are numerous mentions of fine wine, music, literature, and current geopolitics that suggest an unexpected worldliness in our narrator. A fetus has no business knowing about such things. How does McEwan pull it off?

6. In what ways is the ending inevitable? Surprising? Satisfying?

7. If Nutshell were made into a film, who would you cast in the roles of John, Trudy, and Claude?

8. In Atonement, we meet one of McEwan’s most unreliable narrators, Briony. In Nutshell we meet his most reliable narrator. Or is he? Should we trust him just because he hasn’t yet been spoiled by the outside world?

9. What other Ian McEwan novels have you read? Discuss the arc of McEwan’s writing career: his themes, his literary tropes, his plots and characters. Where does this novel fit in that arc? And where does it all point?

10. McEwan has said elsewhere that many novels are over-long. In your opinion what are the virtues of the shorter novels that McEwan often delivers? How, in general, do longer novels fall short?

Dept. of Speculation
Back to Top