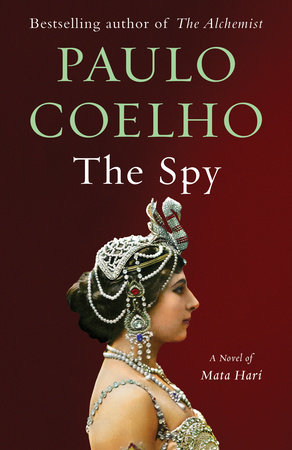 The questions, discussion topics, and reading list that follow are intended to enhance your reading group’s conversation about The Spy, celebrated novelist Paulo Coelho’s masterful retelling of the life of Mata Hari, one of the most infamous spies of the twentieth century.

1. The narrative structure of The Spy shifts among the perspectives of Mata Hari, her attorney, and factual source documents. What does this assert about subjectivity in recounting historical events? How is the true version of the events leading up to Mata Hari’s execution destabilized throughout the reading experience of The Spy? What does the sober presentation of the conclusion of the novel suggest about justice?

2. Discuss the significance of the epigraph that opens The Spy. How does it act as a presage of tone for the novel? How does Coelho’s choice to begin the book with an account of Mata Hari’s death establish mood and setting?

3. Discuss Mata Hari’s childhood. How would you describe her relationship with her parents? Her hometown? How does her mother’s advice to “follow your destiny, whatever it may be, with joy” shape her outlook and worldview?

4. Early in the narrative, Mata Hari reflects on her sexual assault at the hands of her school principal. How does this incident influence her attitude toward sex? Toward men in general? How—and when—does she reclaim her sexuality?

5. On page 20, Mata Hari plainly states, “All the men I’ve known have given me joy, jewelry, or a place in society, and I’ve never regretted knowing them . . .”  How does this unabashed attitude toward sex, money, and fame grate against expected feminine behavior? How do men in the novel react to this brazen reach for power, success, and material wealth? How does she use men as necessary pawns for fulfilling her dreams?

7. The scene in which Andreas’s wife commits suicide is formative for Mata Hari’s identity. How does she describe this incident? How did this episode propel her to take agency over her own life?

8. Describe Mata Hari’s choice to rename herself. What is the significance of her renaming? How does this assertion of a new identity allow her to explore the unruliest aspects of her personality?

9. Mata Hari was of Dutch descent, but she expresses throughout The Spy that her true home is Paris. Why does she feel a spiritual connection to that city? How do Parisians’ attitudes toward her change as she ages? As political tensions mount?

10. How does Mata Hari describe dance? Discuss her first performance of the “traditional” dance of Java. How is cultural appropriation discussed throughout the novel?

11. On page 87, Mata Hari asserts, “For me, love and power were the same thing.” When is this conflation demonstrated most vividly during the novel? How do masculine figures in her life contend with her grasp for power? When does Mata Hari’s power become most problematic? With whom does she share real affection?

12. How are personal secrets and political treachery interwoven throughout the narrative?  Discuss the paranoia that emerges among male authority figures in the novel as political tensions flare. How does Mata Hari’s presence agitate them? How does she treat her responsibilities as H21?

13. How would you describe the working relationship between Mata Hari and her manager, Astruc? Discuss the scene on the beach in which Mata Hari reveals the true facts of her background to him. How does this alter their relationship? Discuss her decision to take the gig in Germany, despite the country’s express anti-Semitism. How did you interpret her decision? Was it out of impetuousness or for reasons of financial security?

14. The tension between private and public selves is explored throughout The Spy. How is Mata Hari’s view of herself enhanced, sated, or complicated by her public stature? How does her public presentation differ from the reality of her existence toward the end of her life? Discuss how she “constructs” her persona from a young age.

15. While incarcerated, Mata Hari writes, “Though at the moment I am a prisoner, my spirit remains free.” (103) How does Mata Hari define freedom? Does the tone of her personal account indicate any sense of guilt or regret at her actions?

Learn More About The Spy
print

The Maze at Windermere

Skeletons at the Feast

Days Without End
Back to Top