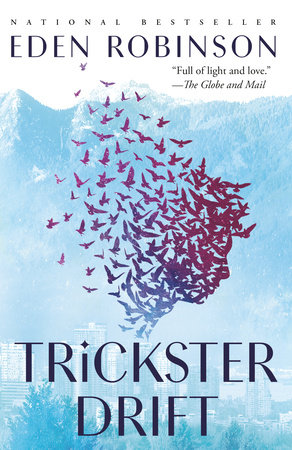 Part of The Trickster trilogy

In an effort to keep all forms of magic at bay, Jared, 17, has quit drugs and drinking. But his troubles are not over: now he’s being stalked by David, his mom’s ex–a preppy, khaki-wearing psycho with a proclivity for rib-breaking. And his mother, Maggie, a living, breathing badass as well as a witch, can’t protect him like she used to because he’s moved away from Kitimat to Vancouver for school.
Even though he’s got a year of sobriety under his belt (no thanks to his enabling, ever-partying mom), Jared also struggles with the temptation of drinking. And he’s got to get his grades up, find a job that doesn’t involve weed cookies, and somehow live peacefully with his Aunt Mave, who has been estranged from the family ever since she tried to “rescue” him as a baby from his mother. An indigenous activist and writer, Mave smothers him with pet names and hugs, but she is blind to the real dangers that lurk around them–the spirits and supernatural activity that fill her apartment.
As the son of a Trickster, Jared is a magnet for magic, whether he hates it or not–he sees ghosts, he sees the monster moving underneath his Aunt Georgina’s skin, he sees the creature that comes out of his bedroom wall and creepily wants to suck his toes. He also still hears the Trickster in his head, and other voices too. When the David situation becomes a crisis, Jared can’t ignore his true nature any longer.

Also in The Trickster trilogy 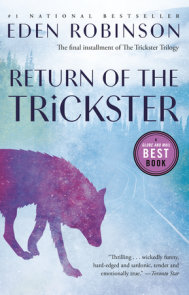 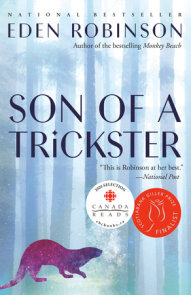 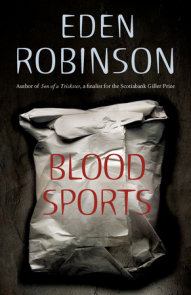 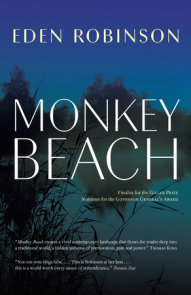 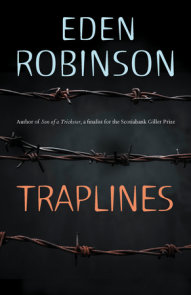 See all books by Eden Robinson

EDEN ROBINSON has matriarchal tendencies. Doesn’t have a pressure cooker, but knows how to jar salmon. Her smoked salmon will not likely kill you. Hobbies: Shopping for the Apocalypse, using vocabulary as a weapon, nominating cousins to council while they’re… More about Eden Robinson

“The book is full of light and love. Robinson has a loopy and wonderful sense of humour, expressed not just by her trademark laughter but her delightful author’s bios.” —The Globe and Mail

“This is a fantastic ride that everyone needs to take.” —Joshua Whitehead, author of Jonny Appleseed, The Writers’ Trust of Canada

“Crafting such exquisite coming-of-age tales that can bring equal parts tears of sadness and laughter takes a certain kind of narrative genius.” —The Vancouver Sun

“Robinson balances realist, coming-of-age subject matter against a supernatural horror-fantasy plot with a comic tone. . . . Robinson understands, like few writers do, how comedy (when committed to fully) can enhance and deepen unfunny emotions such as horror, sadness and pain.” —Winnipeg Free Press

“Canadian Haisla/Heiltsuk writer Eden Robinson has delivered the second in her Trickster trilogy—the first installment, Son of a Trickster, was shortlisted for the Giller Prize. Trickster Drift is even better. It’s an enlightening, entertaining and very funny novel.” —NOW Magazine

“Robinson handles the new instalment of Jared’s story with ease and grace, her trademark good humour and often-disturbing imagination in equal display. Trickster Drift unfolds with the tempo of a literary realist novel, unfolding to include multiple facets of the urban indigenous experience while continuing to incorporate mysteries from other worlds. . . . The third novel can’t come soon enough.” —Toronto Star

“Riveting sequel. . . . Robinson has created a smart, funny and very likeable character in Jared and the reader will yearn for his success and fear for him as the evitable pull to embrace his power is realized.” —Pique

“Straddles the line between violent trauma and humour and tenderness so gracefully. . . . [Robinson] expresses the internal compass of someone’s mind in such a real way.” —National Observer

“If you liked Jared in the first book, you will love him in this one.” —Greater Victoria Public Library


PRAISE FOR SON OF A TRICKSTER, FIRST OF THE TRICKSTER TRILOGY:

“A novel that shimmers with magic and vitality, featuring a compelling narrator, somewhere between Holden Caulfield and Harry Potter. Just when you think Jared’s teenage journey couldn’t be more grounded in gritty, grinding reality, his addled perceptions take us into a realm beyond his small town life, somewhere both seductive and dangerous. Energetic, often darkly funny, sometimes poignant, this is a book that will resonate long after the reader has devoured the final page.” —2017 Scotiabank Giller Prize jury (André Alexis, Anita Rau Badami, Lynn Coady and Richard Beard)