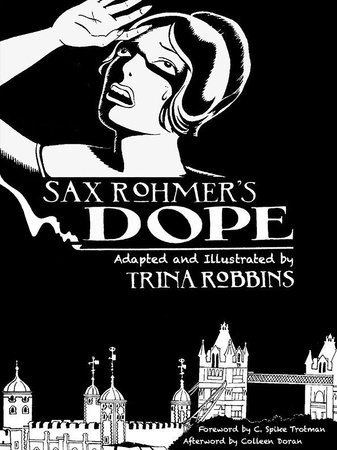 Trina Robbins’ brilliant graphic novel adaptation of Sax Rohmer’s sensational 1919 novel, Dope, is consdered by many (including Trina herself) to be her best work ever as an illustrator. Inspired by true events, Dope was both the first novel to speak openly about the world’s international drug trade and the first story to center around the death of a celebrity by drug overdose. The graphic novel adaptation was first serialized in Eclipse Magazine beginning in 1981, and is collected here for the first time.

“Pioneering comics writer/artist Trina Robbins takes us inside the 1919 novel by Sax Rohmer and into a turn-of-the-century look at drug addiction of the time. Trina has remained true to the attitudes and sensationalized exploits of the time period, giving us a story filled with opium, cocaine, fallen women, murder, evil Chinese, a dragon-lady in stiletto heels, and intrepid detectives.” —CHRISTY MARX, writer, Sisterhood of Steel

“Trina’s elegant, supple drawing is at once retro and ever current, and she is ideally suited to the exotic pulp world of Sax Rohmer.” —MAX ALLAN COLLINS, author, Road to Perdition

“When it was first published in 1919, Sax Rohmer’s Dope was a sensation —a thriller torn from London newspaper headlines centering around the city’s notorious opium dens. A half-century later, the ’60s counter-culture rediscovered and embraced its depiction of a long-dead drug scene. Approaching its 100th year, Rohmer’s account still fascinates. The drugs of choice may change with the times, but the dance of death and depravity continues on….” —WILL MURRAY, author and pulp historian, Doc Savage