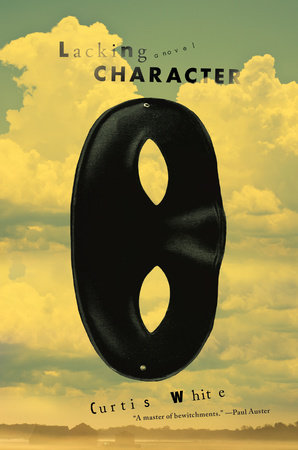 Curtis White’s long-awaited return to fiction reminds us that the founder of one of American literature’s most vibrant and innovative movements is still the King of “transcendental buffoonery.”

The story begins when a masked man appears in the night at the door of the Marquis, proclaiming a matter of life and death: “I stand falsely accused of an atrocity!”

Except he’s not, really; he’s just trying to get the attention of the Marquis (a video game-playing burnout) to help him enroll in some community college vocational classes. And so the exchange gets badly botched, and our masked man is soon lost in a maddening America, encountering its absurdities at every turn, and cursing his cruel fate.

In a time with the crisis du jour, White asks us to remember what it’s like to laugh–to be a little silly even–in order to reclaim what used to be fundamental to us: the strength to create our own worlds. 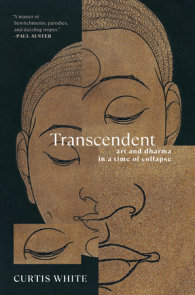 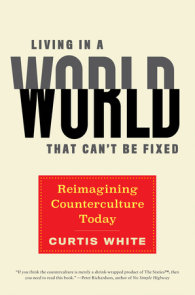 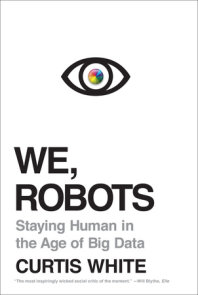 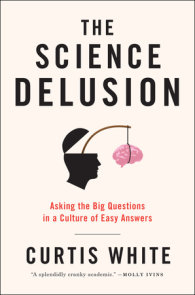 See all books by Curtis White

“A comic, absurd delight… White is a postmodern master, and in this wild satire he transforms the banal into magic.”—PUBLISHERS WEEKLY

“Endlessly inventive and endlessly imitative… [Lacking Character] bills itself equally as a bomb tossed into the bunker of literary convention; an algorithm endlessly replicating the capitalist apocalypse; a picaresque through which White’s mad characters tilt at real giants disguised as miniature-golf windmills. The result is a profane wrestling match between high style and low comedy which owes as much to Rocky and Bullwinkle as it does to Gauguin’s Vision After the Sermon.”—KIRKUS REVIEWS

“A blistering, madcap romp through the current zeitgeist.”—BOOKLIST

“Raw, rude and rowdy metaphysical slapstick, packed with buffoonery, frantic, at times wistful. Lacking Character is meant to amuse, piss off and, above all, distract from prevailing, pandemic lunacies.”–Rikki Ducornet

“Lacking Character is marvelous. It is what writing must be (what is required) in this very moment of the Kali Yuga.”–Mark Leyner

“White supplies a running satire of American life, viewing the absurdities of the present through novelistic conventions from centuries past. He mixes the highfalutin language of lords and ladies with the cadences of screwball comedy and an American strip-mall landscape.“ – POPMATTERS

Q: The book begins with a bang: “What follows is a story of contagion, and it begins, as all such stories must, with a message both obscure and appalling.” As we read on, we begin to understand that the contagion is, in large part, stories, which multiply across these pages by a thrillingly deranged meiosis. How do you see this idea of story-as-contagion informing this book?

A: Well, on the one hand I’m just trying to start the book in the way that Poe or E.T.A Hoffmann would have, with some lurid and lyrical come-on. I’m just trying to get the reader to want to read the next sentence. Is the novel really about contagion? Even I had to wonder as I wrote it—and the line was actually the last thing that I wrote in the book.

Beyond that, if there was ever a time when things seemed contagious, it is now, thanks to any number of things—computer viruses, invasive species, super-bugs, click-bait and the viral flow of fake information, and of course actual horrifying diseases like Zika, Ebola, etc. Never has biology seemed so sinister! Never have we felt closer to contamination. Not only does all this seem out of control, it feels like it is accelerating. No wonder we’re all sucking on Xanax.

Q: At one point Percy, the main (“main”) character, employed as a kind of suburban sex-slave-cum-therapist, says, “That’s what we do here. Cure people of the things they say. In theory, once we have cured them, both sincerity and irony will have dissolved…That will be the end of the things we say, and good riddance, for then we will only have what is.” Could you talk about this idea of language as contagion?

A: As you suggest, the novel proposes a different kind of contagion, something very old and comforting that we seem to have forgotten: the happy frenzy of play. I think that a good part of the point of Lacking Character, if it can be said to have a point, is that in a world that feels like it’s carrying us at velocity, a cultural and biological riptide, we need to move at an angle, crosscurrent, and provide our own native version of contagion, our more human version of contagion, storytelling. That’s important because storytelling is really about world-making. That’s something that we seem to have handed over to the boy geniuses at Apple and Google, and handed over to the mass media. I say that storytelling—I’m thinking, as ever, of Rabelais and Boccaccio and Mark Twain—is a kind of contagion because it is infinite. It is always being spun out in front of us. It contaminates the future in a good way. Our problem, it seems to me, is that we’ve handed that human process over to monsters and we’re so horrified by what they come up with, their stories, that all we ever do is respond to them, swim directly into their current, in horror, as any daily news cycle will show.

It’s like what William Carlos Williams said about poetry: you won’t find the news there, but people die miserable every day for lack of what is to be found there. That the news isn’t there is no accident. The news is what’s making us miserable. Now more than ever it seems.

Q: You possess a truffle pig’s nose for irony. Could you talk about your relationship to irony? What do you see as its role in this book? Is it related to this quote, where you intrude upon the narrative to present us with parts that have been cut out, and say: “It’s transcendentally silly or just silly as shit, depending on your philosophical orientation.”

A: Irony has taken it on the nose in recent decades, witness the demise of so-called postmodern fiction in the name of so-called “socially relevant” fiction. But for me irony is a form of metaphor: one thing in the place of another. Saying one thing and meaning something else. Irony, and I’m thinking here of comic irony, frees us from “what is said,” frees us from our reigning platitudes, all of our preposterous certainties about what is true or real. Irony performs again and again the feat accomplished by the little boy in the Emperor’s new clothes: it demolishes our finally stupid (I’m sorry, but…) our finally stupid beliefs to which we cling as if to life itself even while those beliefs are murdering us. I’ll mention just one obvious example: the Second Bleeding Amendment.

What I’m saying might make it seem like I wrote a “program novel,” a novel whose purpose is to illustrate an idea or a philosophy. But what I enjoyed about writing the novel was how pure it felt, how much it was only about its own process of becoming. I use a quote from Fellini in the book, one of many epigraphs. He says, “My work is a mirror of my searching for myself freed.” That is what I’m trying to do.

Q: Every chapter begins with an epigraph. Why?

A: First, they’re comic commentaries on what will happen in the chapter. In addition, they’re a kind of bibliomancy that I like to practice. But instead of randomly poking my finger in books in order to predict the future, I stay alert to passages in the books I happen to be reading in order to conjure, or to discover, this thing I’m trying to make, this “novel.”

In this case, though, taken together the epigraphs actually create a sort of parallel text that has its own drama and argument, mostly taken from the tradition of Romantic play, thus Schlegel and his appeal to “transcendental buffoonery,” or all of the allusions to Diderot’s Jacques the Fatalist. This is a link to my non-fiction books, especially the last chapter of We, Robots, where I describe this tradition. I don’t want to get into the thickets with that here.

Q: There’s a moving passage, from which you get the title, about your relationship to your characters and the imaginative realm they inhabit. I loved seeing how the characters opened you up to this kind of vulnerability, this emotional and intellectual honesty. Your strategy of turning a perceived failure into something to embrace, even celebrate?

A: A very interesting question. Yes, the passage concerning “lacking character” is this: “my characters live not in the world but midway in some interior distance, suspended between a mute God and the babble of the world.” It’s a humbling question because I feel like I’m confronted not by a passage I have created and can explain, but by a fundamental spiritual question—how can we survive when we live in lack, the lack of knowing who we are?—if such a thing can be said to exist in a work so devoted to the mayhem of comedy. It is a sort of Platonism of the middle distance. Obviously, we are not the babble of the world, we are not the awful stories that the world tells about us, but then what are we? God may know, but he’s not talking. It’s why we’re so afraid of leaving behind the stories that the world tells us, even the most violent and fanatical of those stories. Because once we leave behind God and country, Chevrolet and apple pie, blut und erde, we’re on our own and that can be terrifying. Art since the Romantics has tried to make the process of self-invention less scary, more about play and openness to possibility. “Free frame of reference,” as the hippies said. That is ultimately what Lacking Character is about if it must be “about” something: play and the openness to possibility.