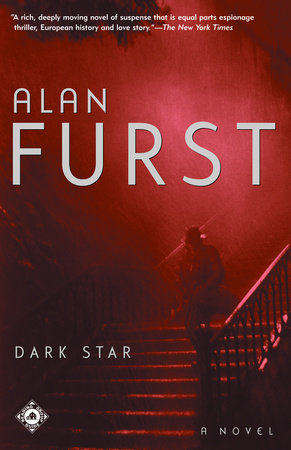 1. The protagonist of Alan Furst’s Dark Star, Andre Szara, is a journalist for Pravda. Do you like the idea of a writer as a lead character? What might having a writer as the protagonist provide the story? What problems might it raise?

2. Consider Furst’s use of suspense in Dark Star. How does he build suspense? Discuss different methods he uses in the novel.

3. Discuss the theme of heroism in the novel. How does Szara define the word? How does his definition compare with the way other characters understand the word?

4. Dark Star deals with the inability of German Jews to escape Nazi Germany by immigrating to other countries. In what ways does the novel suggest a broader responsibility for the fate of German Jews? What questions must a country consider before it can accept immigrant refugees?

5. Discuss the characters of General Bloch, Lady Angela Hope, Roddy Fitzware, Renate Braun, and the diplomat Von Polanyi as representatives of national secret services. In what ways are they similar? Different? What can you extrapolate about the service agency for which each one works?

10. Love affairs are always prominent in Furst’s novels, and “love in time of war” is a recurring theme. What role does the love affair play in Dark Star?

There is an enormous body of literature, fiction and nonfiction, written about the period 1933—1945, so Alan Furst’s recommendations for reading in that era are very specific. He often uses characters who are idealistic intellectuals, particularly French and Russian, who become disillusioned with the Soviet Union but still find themselves caught up in the political warfare of the period. “Among the historical figures who wrote about that time,” Furst says, “Arthur Koestler may well be ‘first among equals.’ ” Furst suggests Koestler’s Darkness at Noon as a classic story of the European intellectual at midcentury.

Furst, as a novelist of historical espionage, is most often compared with the British authors Graham Greene and Eric Ambler. Asked about Ambler’s books, Furst replies that “the best one I know is A Coffin for Dimitrios.” Published in 1939, a month before the invasion of Poland, Ambler’s novel concentrates on clandestine operations in the Balkans and includes murder for money, political assassination, espionage, and drug smuggling. The plot, like that of an Alan Furst novel, weaves intrigue and conspiracy into the real politics of 1930s Europe.

For the reality of daily life in eastern Europe, Furst suggests the novelist Gregor von Rezzori, of Italian/Austro-Hungarian background, who grew up in a remote corner of southeastern Europe, between the wars, and writes about it brilliantly in Memoirs of an Anti-Semite, which takes place in the villages of Romania and the city of Bucharest in the years before the war.

To see life in that period from the German perspective, Furst says that Christopher Isherwood’s novels The Last of Mr. Norris and Goodbye to Berlin are among the best possible choices. The sources for the stage plays I Am a Camera and Cabaret, these are novelized autobiographies of Isherwood’s time in Berlin; they are now published as The Berlin Stories. Furst calls them “perceptive and wonderfully written chronicles of bohemian life during the rise to power of Adolf Hitler and the Nazi party.”
For a historical overview of the period, Alan Furst recommends Martin Gilbert’s A History of the Twentieth Century, Volume Two: 1933—1951. All the major political events that rule the lives of the characters in Alan Furst’s novels are described, in chronological sequence, in this history.
Learn More About Dark Star
print

The World at Night
Back to Top