Under the Rainbow Reader’s Guide 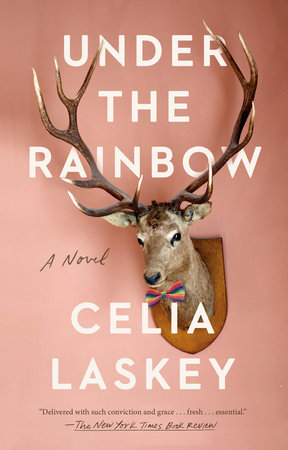 Under the Rainbow Reader’s Guide

print
Under the Rainbow Reader’s Guide

1. Under the Rainbow is about what happens when a group of outsiders moves into a close-knit town. In what ways does the town of Big Burr function as a character in the novel? Did your feelings about Big Burr change over the course of the book? Why or why not?

2. The novel orchestrates a chorus of voices that are braided together to tell a complex and moving story. Which characters did you identify with? What was the effect of showing us the world of Big Burr through many different perspectives?

3. Christine is one of the most divisive characters in Under the Rainbow. Did you have any empathy for her situation? Why or why not? What do you think drives her to burn the billboard?

4. At the beginning of the novel, Avery defines “hetero shame” as “Fear of coming out as heterosexual to your lesbian mom, who you know wishes you were a lesbian, too.” How does Laskey interrogate shame? Which other characters feel shame and how does their shame manifest? What is the author saying about the larger social forces at play, in the town as well as in our own lives?

5. After one of Tegan’s listening sessions, a woman whom Tegan calls “braid lady” chastises her by saying, “You hold a listening session but you don’t actually listen. You don’t care how we feel—it’s all for show. You act like you’re so much better than us but you hate us, too, and for the same reasons you think we hate you.” What do you think of her comments? In what ways do they reflect more widely on the town and the task force as a whole? Do Tegan’s attitudes change as a result of this criticism?

6. The novel centers on and prioritizes many different kinds of friendships: Lizzie and Tegan, Avery and Zach, Elsie and Harley, Linda and Jamal. Are all of these friendships mutual? Are they hopeful relationships? What is the author saying about the capacity for human connection across vast differences?

7. A theme of Under the Rainbow is secrets, why we keep them and what pushes them—willingly or not—into the light. What is the cost of keeping secrets on the characters? Are any secrets worth keeping? What results from telling the truth?

8.  Gabe is the only character in Under the Rainbow who gets two chapters told through his perspective. Why do you think Laskey chose to end the novel with him? How did you feel about the way his story resolves?

9.  Laskey often counterbalances the darker and more tragic elements of Under the Rainbow with warmth and humor. What effect does this have on the novel as a whole? Does humor allow us to absorb the more difficult truths?

Learn More About Under the Rainbow
print

The Secret Life of Bees
Sue Monk Kidd
Back to Top