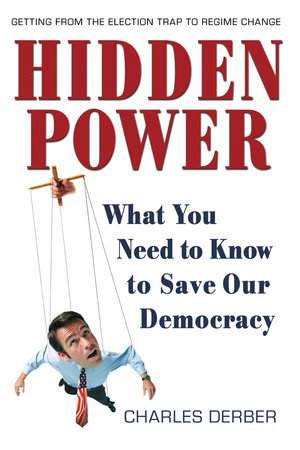 What You Need to Know to Save Our Democracy

American democracy, argues Charles Derber, is being subverted in the name of democracy itself. Derber shows how the current regime has maintained power by intensifying the red/blue culture wars—supporting religious extremists, exploiting terrorism fears, and manipulating the electoral process. And he reveals our best hope for positive change: an alliance between the Democratic Party and another source of hidden power—the grass roots progressive movements that have always been catalysts for change. Thoughtful, eloquent, and compelling, Hidden Power offers real hope for restoring genuine democracy to America. 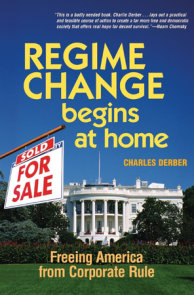 See all books by Charles Derber

“If you're feeling assaulted on all fronts—by militarism, outsourcing, the Patriot Act or the culture wars—here's a book that puts it all together brilliantly. Derber's analyses of the turn toward fascism, the post-2004 morals debate, and what the Democratic Party needs to do are eye opening and powerful."
—Juliet Schor, author of Born to Buy and The Overworked American

“A powerful argument about who really rules America. Read it to see how ordinary citizens are reinventing the populist and progressive traditions to challenge the ruling regime, democratize the Democratic Party, and change the direction of an America gone haywire.”
—Howard Zinn, author of A People's History of the United States

“… a real-life plan on how to counter the corporate control of our democracy, avert a fascist takeover, and build an empowered citizens’ movement."
—Medea Benjamin, cofounder of Global Exchange and CodePink

“A remarkably lucid depiction of how we have come to stand on the cusp of fascism, what that precipice looks like, and what we can do to back away and move toward more rather than less democracy.”
—George Ritzer, author of The McDonaldization of America

“… a timely and very valuable guide to the constructive action that is within our reach, and badly needed to overcome threats that are imminent and severe.”
—Noam Chomsky

“[Derber] offers the real scoop on war, money, power, and ‘moral values’ that the mass media refuse to report…. and he gives a step by step agenda for how to defang the bloody warriors of Washington and Wall Street.”
—Larry Beinhart, author of Wag the Dog

Acknowledgments
Introduction: Who Really Rules America
CHAPTER 1 American Regimes
CHAPTER 2 The Powers That Be
CHAPTER 3 The Rules of Change
CHAPTER 4 Cracks in the Regime
CHAPTER 5 Black Magic
CHAPTER 6 Fascism Lite
CHAPTER 7 The American Recipe for Change
CHAPTER 8 What’s the Matter with the Democrats?
CHAPTER 9 A Cure for the Blues
CHAPTER 10 Saving Democracy
Appendix I: What You Can Do Now
Appendix II: Organizations to Join
Appendix III: Magazines
Notes
Index
About the Author