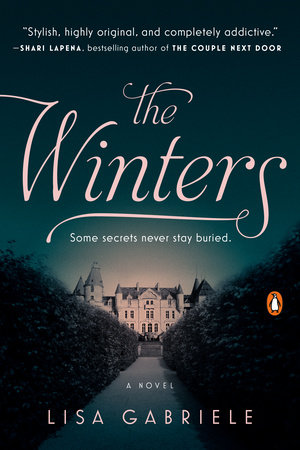 The Winters is a riveting story about what happens when a family’s ghosts resurface and threaten to upend everything in the present. A young woman falls in love with a wealthy senator, who may or may not be hiding dark secrets. Back at his mansion off the coast of Long Island she meets Dani, her soon-to-be-stepdaughter, whose ideas about what really happened to her perfect mother, Rebekah, the night she died two years earlier, are sinister. But are they true?

Dani soon makes life hell for her father’s new love. But is Dani still grieving or are there darker forces at play? And can love conquer all? Throw in social media manipulations, gaslighting, blackmail, political ambitions, inheritance, and finish it off with a bullet and a body, and you have a modern feminist revenge fantasy for fans of Daphne du Maurier’s Rebecca, as well as a dark, sexy thriller that stands all on its own.

1. The Winters has been described as a modern response to Daphne du Maurier’s Rebecca. Have you read Rebecca? If yes, did that enhance your enjoyment of The Winters? How does The Winters stand on its own as a distinct work?

2. Lisa Gabriele has said that, in The Winters, she sought to examine shifting gender roles and norms since Rebecca’s publication. She has argued that men—in particular, powerful white men—have not changed as much as women have. Do you agree? How does The Winters illustrate this?

3. What role do the disparate settings of Rebecca and The Winters—1930s England and 2010s America—have in shaping the plot? How do the cultural forces at play differ between the books? How are they the same?

4. The unnamed narrator says there was nothing about her that would suggest she was the type to fall for a man like Max Winter. What do you think she means by this? Do you agree with her?

5. The narrator gleans information about Rebekah’s life and death, as well as about Max and his daughter, Dani, from her internet searches. How has the internet made it difficult to keep the past in the past? Do you think this is a good or bad thing?

6. Discuss the moment the narrator lays eyes on Asherley, Max’s estate and her new home. Why is this Cinderella trope—of a lower- or middle-class woman rescued by someone rich—so common in literature? Have you ever had this fantasy?

7. Dani and Max tell differing stories about what happened to Rebekah that night in the greenhouse. What makes Max easier to believe than Dani? In the narrator’s place, who would you believe and why? How do you think Rebekah died?

8. Discuss the use of water as a symbol in The Winters. Why do you think this symbol recurs and what do you think it represents?

9. Early in the story, Louisa tells the narrator, “I can see what Max sees in you. . . . He brought you home for a reason.” Our narrator believes this reason is love. What do you think?

10. Revisit the opening scene of the book. Has your interpretation of this scene changed now that you’ve finished the novel? Does The Winters have a happy ending?

Learn More About The Winters
print

The End of Her
Shari Lapena

Gone Without a Trace
Mary Torjussen

The Perfect Wife
JP Delaney
Back to Top