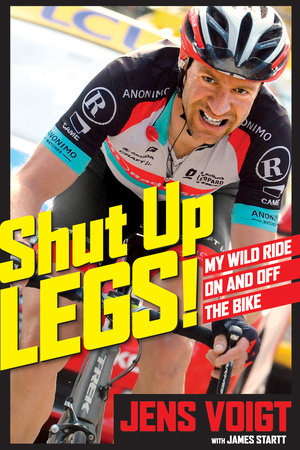 My Wild Ride On and Off the Bike

By Jens Voigt and James Startt

By Jens Voigt and James Startt

About Shut Up, Legs!

Beloved German cyclist Jens Voigt isn’t a superstar in the traditional sense of the word. Although he won three stages of the Tour De France—and wore the yellow jersey twice—Voigt never claimed an overall victory. He became a star because he embodies qualities that go beyond winning and losing: sacrifice, selflessness, reliability, and devotion. European and American crowds were drawn to his aggressive riding style, outgoing nature, and refreshing realness.

Voigt adopted a tireless work ethic that he carried throughout his career. In Shut Up, Legs! (a legendary Jensism), Voigt reflects upon his childhood in East Germany, juggling life as a professional cyclist and a father of six, and how he remained competitive without doping. Shut Up, Legs! offers a rare glimpse inside his heart and mind.

“Cyclists around the world and of all ages will be grateful Jens shut up his legs but not his mouth. His hilarious, unique, instructive, always heartfelt stories from inside the peloton bring even more color to one of the most colorful careers in all of pro bicycle racing.”
– Bill Strickland, editor-in-chief, Bicycling

“Going to a bike race with Jens is like going to a bike race with a poker player. Jens is always looking at his hand and seeing what he can do with it, for himself and for his team. Sometimes he might launch an attack and go for the win. Sometimes he might attack just for a couple of strategic bonus seconds. Sometimes he might attack to go after the best-climber jersey or some other smaller prize. Or perhaps he would start driving the pace after more than 180 kilometers of racing, simply to split up the field and set up one of his teammates. Regardless of the prize, he’s always trying to make the most of what he’s got, for himself as well as the team, always trying to make the most out of every situation with the cards hes holding at the time.”
– Lars Michaelsen, onetime teammate and sports director of Voigt, currently sports director on the Tinkoff-Saxo Bank team

“With Jens, there are just so many stories, because he was always there when you needed him. I don’t know how many times our job would be to cover the early breakaways in a race, and he was always there. He was just relentless! When you’re covering the early breaks, you have to follow all the attacks. Sometimes I would just need a break to recover. But when I would look up, Jens was still going! I swear he was attacking his own shadow sometimes! You just couldn’t stop him!”
– Stuart O’Grady, former teammate of Voigt on GAN, Crédit Agricole, and CSC

“The one thing that never changed with Jens was his desire to win. It didn’t matter if it was cross-country, soccer, or cycling–he always wanted to win! I’ll never forget that. At the sports school we played a lot of soccer in the winter. And Jens always played to win. He was far from the best player on a technical level, but he was just running nonstop all over the field, trying to make a play. He just wouldn’t give up. It didn’t matter if we were four goals behind. Jens did not know how to give up. Defeat just was not a part of his vocabulary. And it still isn’t today!”
– Jan Schaffrath, schoolmate of Voigt, former professional cyclist, Etixx-Quick-Step team director.