Not the Girl You Marry Reader’s Guide 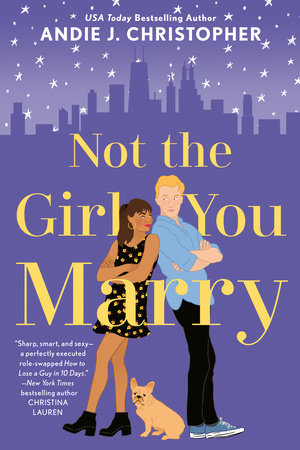 Not the Girl You Marry Reader’s Guide

print
Not the Girl You Marry Reader’s Guide

Not the Girl you Marry by Andie J. Christopher
Reader’s Guide
Questions for Discussion

4. Jack’s dad gives Michael and Jack a very brief— but frank— sex talk. Did the content of that talk surprise you? Did it subvert the notion of toxic masculinity? How does Sean Nolan’s attitude toward sex influence Jack?

5. Who would you cast to play Hannah and Jack in a movie version of the book?

6. Jack perceives himself as the ideal boyfriend at the be-ginning of the book because he’s surrendered his needs for the needs of his partners in the past. Is Jack the per-fect boyfriend? Or is his perfection keeping him from making a genuine, lasting connection?

7. Jack has close, intimate friendships with his male friends— particularly Father Patrick. How do you think those relationships shape him as a person and affect how he approaches his burgeoning relationship with Hannah?

8. How did you feel about Noah and Hannah’s relation-ship as exes? Why do you think they started dating in the first place? How do you feel about where they ended up?
Learn More About Not the Girl You Marry
print

Not That Kind of Guy

The Intimacy Experiment
Back to Top