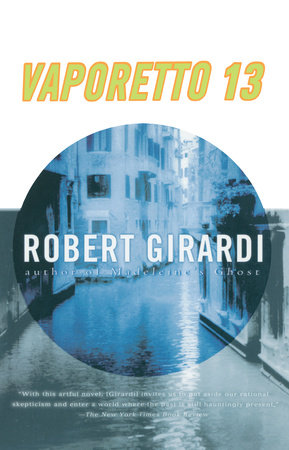 In a city sustained by a miracle, a woman with an unfathomable past and a man with an uncertain future are about to engage in a romance that will transcend the ordinary boundaries of love and life.

Venice is echoing with the voices of all its old ghosts. Beneath the city’s exterior beauty–sun-streaked canals, charming gondolas, and splendid piazzas–is a world of bone-chilling cold, dank alleyways, and a tradition that marks a Holiday of Death. Cloaks and masks, disguise and intrigue, are a time-honored way of life in this familiar yet unknowable city in which Jack Squire, a currency trader on assignment from Washington, D.C., has taken up residence. On one particular autumn night swirling with damp mist and moving shadows, Jack finds himself in a campo teeming with stray cats. There he meets Caterina, a woman bearing the sadness of centuries, whose strangeness immediately possesses him, and whose past eludes and controls him.

Vaporetto 13 is the relentless and mesmerizing story of one man’s search for truth and the haunted city in which he finds it.

1. Location, in the novels of Robert Girardi, plays as significant and substantive a role as the main characters. Discuss how Girardi uses Venice as a character in this novel to move the action and to shape the story of Jack and Caterina.

2. Anthony Giardina noted that "very few fiction writers have [Girardi’s] grasp of history, worn this lightly." Discuss the ways in which Girardi interweaves real Venetian history with the fictional story of Caterina’s life. What impact does this device have on our relationship to Caterina and, ultimately, to Jack?

3. Spirituality and religion, specifically Catholicism, figure largely in the progression of events. Discuss how these elements are brought to bear on the characters. Who is Caterina’s "father"?

4. In the opening scene, Jack has his cat put to sleep. Discuss the significance of this event and the fact that Caterina dedicates herself to caring for stray cats? Why do cats figure so prominently in the novel?

5. Caterina and Jack are both misplaced souls, whether in time or space. Discuss the ways in which they are strangers in this world and the significance this has in the development of their relationship and to the novel’s overall themes.

6. In Vaporetto 13 there is a tension between the past, the present, and the future. How does Girardi use the past as a metaphor for the future, and what does he have to say about the parameters of time in general?

7. There are several scenes in the novel where food is featured. Discuss the significance of feasting among the characters, both alive and dead, in this country where good food is a hallmark of the culture.

8. Vaporetto 13 is largely concerned with the aesthetics of its characters and locales. Discuss how these elements bring the characters into better focus and add to the telling of the story.

Robert Girardi is the author of two previous novels. His work has appeared in The New Republic, the Tri-Quarterly Review, and The Washington Post. A past recipient of a James Michener scholarship, he lives with his wife in Washington, D.C.
Learn More About Vaporetto 13
print

A Distant Shore
Back to Top