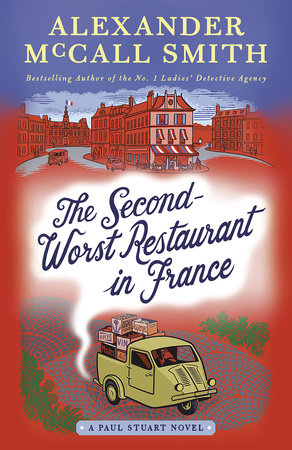 The introduction, questions, and suggested reading that follow are designed to enhance your group’s discussion of The Second-Worst Restaurant in France, the second novel in Alexander McCall Smith’s “Paul Stuart” series.

In this delightful sequel to the best-selling comedic novel My Italian Bulldozer, Paul Stuart’s travels take him to a French village, where the local restaurant’s haute cuisine leaves a lot to be desired.

Renowned Scottish cookbook writer Paul Stuart is hard at work on his new book, The Philosophy of Food, but complicated domestic circumstances, and two clingy cats, are making that difficult.

So when Paul’s eccentric cousin Chloe suggests that he join her at the house she’s rented in the French countryside, he jumps at the chance. The two quickly befriend the locals, including their twin-sister landladies, who also own the infamous local restaurant known to be the second-worst eatery in all of France. During their stay, the restaurant’s sole waitress gives birth mid-dinner service and the maître d’ storms off after fighting with the head chef. Paul is soon drafted to improve the gastronomy of the village, while Chloe, ever on the hunt for her next romance, busies herself with distracting the handsome but incompetent chef. Could he be husband number six?

With all this local drama to deal with, Paul finds it next to impossible to focus on his writing, and that’s before he learns that Chloe’s past is far more complicated than he’d ever imagined. Paul will have to call upon all his experience—with food and with people—to bring order back to the village. And he may just learn something about family—and about himself—along the way.

1. This is the second book in the Paul Stuart series. How has Paul’s character developed? Do you see similarities with any other of McCall Smith’s characters? What are they? How is Paul different from them? What makes him stand out?

2. The book is set in a small French village. What does the setting bring to the story? How is it integral to the book?

3. What do you think of Chloe? What makes her “remarkable?” How would you describe her interactions with Paul?

4. Discuss Paul’s relationship with Gloria. How does she fit into his life? What do they have in common?

5. Paul is writing a new book, The Philosophy of Food. How does food fit into this story? What’s its significance? How have your own experiences with food influenced your memories and what is its importance in your life?

6. In the chapter “Chicken Kiev and Its Ramifications,” Paul meets Alice, the neighbor upstairs from Chloe’s flat. How does their interaction affect Paul? Do you think his break-up with Gloria would have happened without this impetus?

7. Chloe (with Paul’s prompting) speaks often of her five husbands. Why didn’t any of her marriages last? Do you think she is fickle, or looking for an impossible ideal? Do you believe her stories about them?

8. Describe the twin sisters that own the house Chloe and Paul are staying in. How are they influential in the village and to the plot of the book?

9. Discuss Audette. What do the other villagers say about her? How do you think she would defend herself if someone were to criticize her to her face?

10. Who is your favorite character from the village? Why?

11. Why does Claude continue to run the restaurant when he cannot cook? Why do the sisters (and the town) support this endeavor?

12. Describe Hugo. How does his personality develop throughout the book? How is he different from Claude?

13. On page 167, Chloe says, “You can forgive anything in a place like this, Paul. Or at least I can. It’s all very different here, don’t you think?” What about the village setting makes things forgivable? What needs to be forgiven? Do you have a specific setting (in your mind or a physical location) in which things seem simpler?

14. Paul enjoys writing, and enjoys food. At what point do you think writing The Philosophy of Food became a burden?

15. If you were writing a Yelp review of La Table de St. Vincent as Claude ran it, what would you say? What review would you give Hugo’s restaurant?

16. On page 130, Chloe and Paul speak of valuing and respecting other cultures. “You are part of a culture,” Paul says, “that in the past treated many other cultures with, at best, condescension, and at worst with complete contempt. And this means that you have to be careful that what you say now—when that attitude is so strenuously rejected—does not sound condescending. Or does not sound as if it fails to value other cultures—to respect them.” “But I don’t respect people who enslave others,” said Chloe. “I don’t respect people who treat other people badly in any way. I don’t respect men who put women down. Why can’t I say that?” Do you concur with Chloe (if you disagree with the practices of a culture, you do not have to respect them), or Paul (all cultures are different, and you should respect those differences)? Is there a middle ground?

17. Both Paul and Chloe are quick to help people they feel are in need of their assistance. Some people might find unasked for aid an intrusion or offensive. What do you think about helping people without asking them if they need or want it?

18. Why was Paul so quick to assume Chloe had her friend blow up Bleu’s caravan? Why is he suspicious of her at all?

19. What, in the end, does Chloe say her career is? Do you believe her?

20. Chloe says that there is a “right” side for everything. Does the end always justify the means? Does “right” win in this book? What situations are made better?

21. If you’ve read Candide, discuss how the philosophy of Dr. Pangloss fits into this story.

22. There is much said in the book about cooking and what it means to different people. Do you like to cook? What does cooking do for you?

ALEXANDER McCALL SMITH is the author of the No. 1 Ladies’ Detective Agency novels and a number of other series and stand-alone books. His works have been translated into more than forty languages and have been best sellers throughout the world. He lives in Scotland.
Learn More About The Second-Worst Restaurant in France
print

A Promise of Ankles

Love in the Time of Bertie
Back to Top