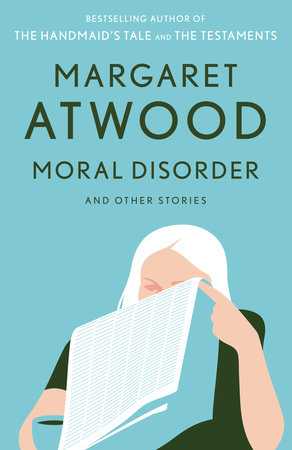 The introduction, discussion questions, and suggestions for further reading that follow are designed to enrich your group’s discussion of Margaret Atwood’s Moral Disorder and Other Stories—a provocative depiction of humanity brimming with topics for good conversation.

One of our best-loved storytellers, Margaret Atwood writes with a wry wit and a keen understanding of human nature. In Moral Disorder, she has created a series of interconnected stories that illuminate a lifetime of emotions, crossroads, and ironic fates. From the 1930s to the present, each decade serves as a rich palette for Atwood’s imaginative, at times wickedly humorous portrayal of the world. Guided by the protagonist, a writer named Nell, we tread terrain that ranges from the scenic to the treacherous: love lost and found, sibling rivalry and the nostalgia of childhood, political anxiety, the aging process, and contemporary life versus the raw power of nature.

1. Discuss the form and structure of the book. How was your reading affected by the fact that Moral Disorder is neither a novel nor a collection of freestanding stories? What freedoms does this form provide both the author and the reader? What was the impact of the shift in point of view from first person to third person? In what way did these shifts correspond to the shifts in Nell’s life?

2. A starred review of Moral Disorder appearing in Kirkus Reviews describes Nell as “a freelance journalist and sometime teacher whose eventual commitment to writing seems born of the secrets and evasions into which a lifetime of relationships and responsibilities propels her.” What is your understanding of Nell’s impulse as a writer? In what way does being a writer shape her approach to the world around her?

3. How did you first interpret Tig’s news that “they just killed the leader of the interim governing council” in “The Bad News” [p. 1]? How did you respond to the narrator’s frustrated musings on Tig’s words and on the violent history of the world?

4. Why does the narrator find Sarah Field Splint’s domestic ideals so appealing in “The Art of Cooking and Serving”? How does she feel about the maid shown in the photographs, both in daytime dress and more formal afternoon attire? When you were a teenager, where did you look for role models and fantasies about your future?

5. What accounts for the sisters’ tremendous differences in “The Headless Horseman”? How did their mother address these differences? How did their perceptions of her, and of each other, change throughout their lifetimes?

6. In “My Last Duchess,” what personal woes do the narrator and her boyfriend project onto the poem? Obtain a copy of this Robert Browning classic and read it as a group. Whose interpretation do you favor? Was the duchess a victim, or a tart? Would the count have been concerned about his daughter’s fate?

7. What does the narrator want from a home and a city in “The Other Place”? How is she changed by her encounters with Owen?

8. How would you characterize Oona, who is introduced in “Monopoly”? As “governess,” should Nell have let the boys win at games? How did she adapt to the other new worlds to which Tig introduced her?

9. What meaning did you ascribe to the title of the featured story, “Moral Disorder”? Did you think of disorder in terms of disarray, or in terms of a malfunction or medical condition? In the title story, what morality, if any, does Nell find in nature, from the profusion of crops to the demise of the lamb in the ending? How does the title apply to the collection as a whole?

10. Do Lizzie and Gladys share common ground in “White Horse”? What allows Lizzie to become freed from misdiagnosis and saved from attempted suicide? Why couldn’t Gladys be rescued?

11. What was the real reason Nell felt compelled to house Oona in “The Entities”? In the closing lines of this story Atwood writes, “In the end, we’ll all become stories. Or else we’ll become entities. Maybe it’s the same” [p. 188]. What entities have you left behind in various houses?

12. In “The Labrador Fiasco,” the story of the doomed explorers sets an ominous tone as the narrator’s father copes with life after a stroke. She concludes the story by saying he is right to doubt her skill. What universal emotions are captured here, as parents reach the point of needing their children to become their guides?

13. In “The Boys at the Lab,” we are told that the narrator’s mother only allows happy endings. How would you characterize the ending of her story? What is the significance of the book’s closing image—the memory of the aristocratic Indian venturing into raw wilderness?

14. Compare Moral Disorder to the Atwood fiction you have read previously. Are there traces of her signature themes, such as dystopia or violated trusts, in these stories? What new territory does this collection chart?

Margaret Atwood’s books have been published in over thirty-five countries. She is the author of more than forty books of fiction, poetry, and critical essays. In addition to The Handmaid’s Tale, her novels include Cat’s Eye, shortlisted for the Booker Prize; Alias Grace, which won the Giller Prize in Canada and the Premio Mondello in Italy; The Blind Assassin, winner of the 2000 Booker Prize; and her most recent, Oryx and Crake, shortlisted for the 2003 Booker Prize. She lives in Toronto with writer Graeme Gibson.

The Love of a Good Woman
Alice Munro