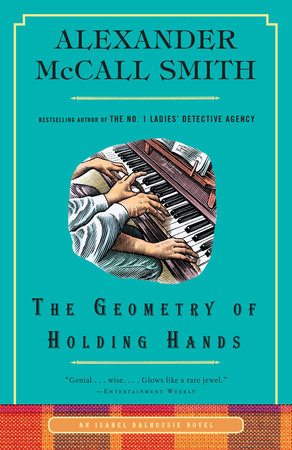 The thirteenth installment of this beloved series finds Isabel Dalhousie maneuvering through life’s intricacies, on personal and professional levels. This guide is designed to enhance your reading group’s focus on some of the main concepts in this book and to enable readers to explore and share different perspectives. Feel free to wander in your discussions, and use this as a guideline only!

Isabel finds herself entangled in some tricky familial and financial situations that will require all of her kindness, charm, and philosophical expertise to navigate.

Just when Isabel and Jamie finally seem to have some time to connect and unwind, a wealthy Edinburgh resident reaches out to Isabel with an unusual request—he would like her to become executor of his large Highland estate. Though Isabel initially demurs, he presses on. He has only a short time to live, and, without any direct heirs, is struggling to determine which of his three cousins would be the best caretaker. Should it go to the bohemian artist, the savvy city property developer, or the quiet, unassuming bachelor?

As if this weren’t enough to keep Isabel occupied, she’s also spending more time helping her niece Cat at the deli. Cat, perennially unlucky in love, seems to have finally found her match in the leonine Leo. But Isabel is beginning to suspect that Leo might be interested in more than Cat’s charms, namely her access to the family trust. Isabel will need to rely upon remarkable reserves of intelligence and compassion in order to give all parties exactly what they want and deserve—no more, and no less.

1. This is the thirteenth Isabel Dalhousie novel. What keeps you interested in the series?

2. If you read other books by Alexander McCall Smith, what parallels can you draw between recurring characters in the different series?

3. Which character in the Isabel Dalhousie is your favorite and why? Who has changed the most? Who would you like to read more about? Who is funny, or serious, or unique?

4. Isabel and Jamie go to an upscale restaurant for dinner. After Isabel sees a local politician get admonished by another patron, she approaches him to speak her mind. What does Isabel say, and do you agree with her actions? Would you behave similarly? Why or why not?

5. Isabel’s reaction at the restaurant is noticed by a man named Iain Melrose, who later finds her in Cat’s delicatessen and introduces himself. He knows Isabel by reputation, and asks to meet with her privately. When she obliges, he asks her to become with executor of his will. What do you think of this situation?

6. Given that Iain is a dying man, should she grant this request? Does she owe him that or is it an imposition?

7. Have you ever been asked to be an executor? What was the experience like? Were the person’s wishes clear, or were you left to make decisions?

9. How would you feel as an heir whose fortunes are decided by a stranger?

10. Iain Melrose is not Isabel’s only concern. Her strained relationship with her niece, Cat, is complicated by Cat’s fiancé, Leo. How does Isabel feel about Leo?

11. Imagine you were Cat. What would you think of Isabel’s reaction to Leo?

12. If money were not an issue, do you think Leo would marry Cat?

13. Cat asks for an expensive car, with the goal of getting a cheaper car Leo wants. Do you think this is smart negotiating, or a duplicity to the trust?

14. How do Isabel’s own feelings about inheriting money intertwine with the Melrose trust and the trust left to her and Cat? Is it harder to be fair when she doesn’t know the heirs, or when Isabel’s own inheritance is involved?

15. When Leo and Cat announce their engagement, Leo accidentally wounds Eddie. While no one thinks Leo actually aimed at Eddie, Eddie blames him anyway for not being careful. Does such negligence warrant anger? Would the situation be different if Eddie like Leo?

16. It’s a happy moment for Leo, and he was simply being exuberant. Leo doesn’t apologize to Eddie directly but through Cat. If Eddie and Leo were friends and it truly was an accident, would it be important for Leo apologize directly? How do you feel about the situation?

17. Cat’s relationship with Leo takes her away from the deli, which she had cared deeply about. If she sells it, and sails with Leo on a boat, instead, do you think she will be happy? Will there be regrets?

18. Isabel solves the situation by having the trust buy the boat, invest in the deli, promote Eddie, and give a job to a woman who needs it. While this seems a great solution, what happens if Cat comes back? Do you think Isabel is capable of cutting her niece’s access to money? How do you think Cat’s will continue on in the series?

19. Jamie is more involved in Isabel’s affairs in this novel. Not only does he approach Cat about Leo and the trust, but he goes with her to discuss her wariness of Hilary Reay. Why is important to Isabel that Jamie support her in these actions? How is it important to the story?

20. The single loose end in the story was Isabel’s distrust of Melrose heir Hilary Reay. When Hilary tells her side of the situation, Isabel feels embarrassed by her assumptions. Why do you think this is important to the story? What other assumptions have been made that were (or may be revealed as) inaccurate?

21. In the end, Isabel knows that helping others is her calling, even if sometimes she stumbles. Have you had instances in your life where you made incorrect assumptions? How did you deal with them and what did you learn? As long as help is given with good intentions, isn’t it more important than not giving anything at all?

22. What would you like to see next for Isabel, and the other characters in her series?

ALEXANDER McCALL SMITH is the author of The No. 1 Ladies’ Detective Agency novels and of a number of other series and stand-alone books. His works have been translated into more than forty languages and have been best sellers throughout the world. He lives in Scotland
Learn More About The Geometry of Holding Hands
print

A Conspiracy of Friends
Alexander McCall Smith
Back to Top