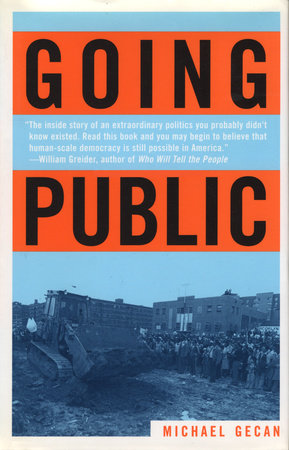 A New York city neighborhood once called “the beginning of the end of civilization” is where Michael Gecan starts. Hired by residents to help them save their community, he and local leaders spend more than a decade wrestling New York politicians in an impassioned effort against all odds that brings in five thousand new homes.

From bad behavior by Ed Koch to complicated negotiations with Rudy Giuliani, Gecan tells the inside story of how the city really works, and how any organized group of citizens can wield power in seemingly unmovable bureaucracies.

Gecan’s unwavering vision of the value of public action has roots in a rough childhood in Chicago, where he witnessed extortion by the mob and a tragic fire in his Catholic grade school that left ninety-two children and three nuns dead.

In his inspiring story of the will to claim the full benefits of citizenship, Gecan offers unforgettable lessons that every American should know: What is the best way to talk to politicians? What resources do all communities need to create change? What kinds of public actions really work?

“The inside story of an extraordinary politics you probably didn’t know existed—ordinary Americans getting together and acquiring real power for themselves.” —William Greider, The Nation

“If you want to know how ordinary Americans accomplished extraordinary things—built affordable homes, created effective schools, won living wages—then the story and the strategy reside in this remarkable book.Iis at once pragmatic and profound.” —Samuel G. Freedman

“A kind of manual of style for those who want to—at least once, just once—beat the bastards.” —The Village Voice

“A compact, instructive guide that effectively updates Saul Alinsky’s Reveille for Radicals and Rules for Radicals for the 21st century.” —Library Journal

“This is a classic! Going Public is an engaging, informative, and entertaining book with a message for all who are called on to organize to make a difference, whether in their community or their company.  These insights from a consummate organizer are both a ‘how to’ and ‘why to’ primer for anyone who wants to have an impact.” —Tom Wheeler, author of Take Command: Leadership Lessons from the Civil War

“This book celebrates the ‘ordinary’ person who discovers his/her hidden power in a community—as an organizer. As a result, the place and the person come awake and alive. Going Public is one of the most hopeful books I’ve read in years.” —Studs Terkel, author of Will The Circle be Unbroken?